There are so many different ways to get vegan recipes these days. The easiest is to just search Google. Sometimes you want an endorsed recipe, so you ask your social networks. Maybe you follow some blogs for ideas, subscribe to magazines, buy cookbooks. There’s also the good old fashioned email newsletter subscription. Emailed recipes usually take advantage of in season ingredients which makes it easy to go back and find a group of Thanksgiving appropriate recipes in your email archive, for example. If you hate the idea of more stuff in your inbox, move along now. That’s all this post is about. But if you’re always looking for new recipe ideas and don’t mind a bit of mail, here are a few options:

The Vegan Culinary Experience: This is my favorite. It’s a monthly pdf magazine with articles, interviews, reviews and a ton of recipes that follow a theme each issue. July’s is The Hot & Spicy issue [pdf]. Ancho Vanilla Coffee, Plantains with Chile Ginger Sauce, Sundried Tomato Jalapeño Poppers, Torture Chili and more ranging in spice from mild to eat at your own risk. So many butthurt opportunities here. And the recipes are always interesting. Subscribe here.

Meatout Mondays: This is an oldie but a goodie. I think I’ve been subscribed forever. Every Monday you get a recipe and usually a product review and an article. These recipes are usually pretty easy to prepare and made of easy to find ingredients. Some recent issues included recipes for Southern Sweet Tea Salad, Berry Tapioca Parfaits, Cosmic Cashew Kale, Citrus Tofu & Pineapple, etc. Sign up here.

VegNews Recipe Club: Get a weekly recipe from VegNews. And you may want to sign up for their monthly newsletter. It seems to contain different recipes. Recent recipes: Spinach Thyme Soup, Mango Coconut Sorbet, Strawberry Rhubarb Sauce, Garden-Fresh Ratatouille, Pear & Fig Tart, etc. Find the newsletter sign up in the navigation on the right side of the site. 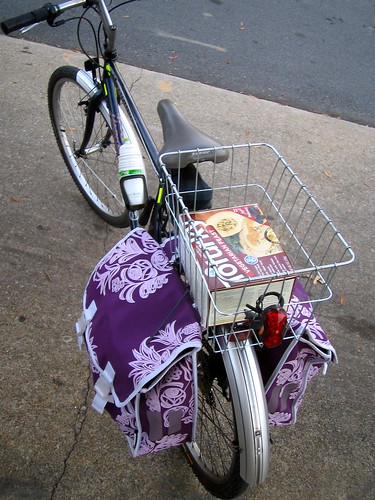 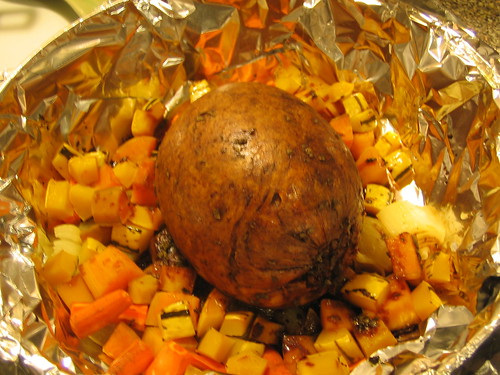 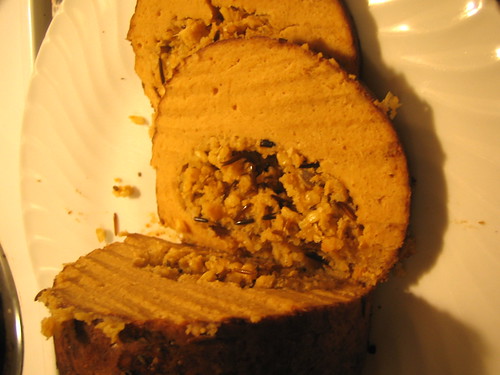 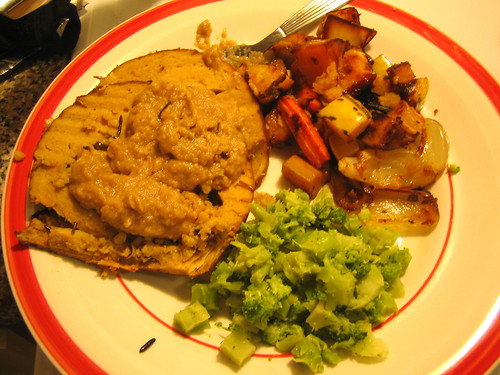 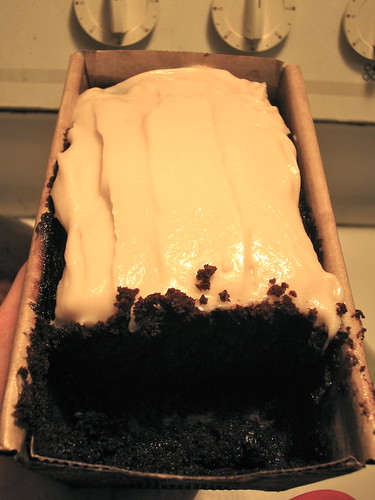 Sunday night we went to see Thievery Corporation with some friends. Beforehand, we grabbed dinner at R. Thomas Deluxe Grill. R. Thomas is one of those places where just about everyone can be satisfied. They have some meaty stuff, vegetarian, vegan, raw. They usually have a vegan desert too. While I do feel kind of bad for the birdies in cages outside, it’s a good place to go with mixed company.

They have several bowls that can be vegan. I got the Lucky Green Tea Bowl. Except they were out of bowls, so it’s on a platter. Doesn’t matter, it ate up fine. Tofu and veg stir fry in a miso green tea sauce on top of quinoa with pickled cabbage (I think) and a pile of greens. Half satisfied me and I ate the other half for lunch the next day. 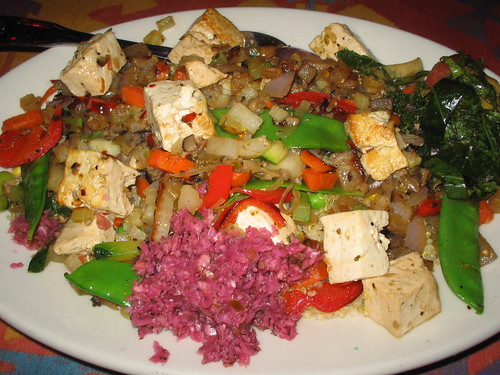 Beth was sitting across from me and got one of the raw dinners, #2 I think. I enjoy getting them from time to time. 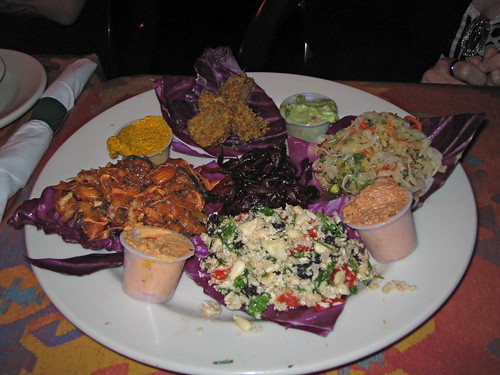 Thievery Corporation was really good. Ton of people on stage. At least 5 vocalists. Three encores. You can kind of see in the picture how packed the stage was with stuff. One of the last songs of the night they had a bunch of girls from the audience come up and dance on stage. There was one that looked kind of like Kate Gosselin and was doing the most awkward booty dance I’ve ever seen. She was also apparently dry-humping the sitar player. I’m sorry I missed that. Or not.

I really do love eating giant salads. I just don’t always feel like making them. So if I do feel like it, I go with it. This week has definitely been saladoriffic. Romaine is my favorite lettuce. It lasts pretty long in the fridge and stays nice and crispy. Carrots are always there. Red, orange or yellow bell pepper. After that, it’s really up to whim and what catches my eye at the market. This week I also had radishes, cucumber, summer squash, and cucumber. Then a sprinkling of almonds or walnuts. And this week I added protein, tofu or a fake chicken patty. All were tasty and satisfying. Maybe they make up for the parfait I ate and the chocolate chocolate chip coconut muffins I made. Probably not.

While we would have been perfectly happy going back to Harrison Street Coffee Shop for lunch Sunday, we decided to continue the standard food tour every vegan does when they visit a different city. So we went to Ipanema Cafe instead, which was right around the corner from Harrison Street.

Ipanema Cafe is in the basement of a building. Lots of exposed brick and definitely on the dark side. I can see it being a favorite of people with hangovers and vampires. The place was full when we got there, but the bar was empty so we decided to go ahead and sit there to eat. They were serving the brunch menu but while we were sitting there we could see the dinner menu posted on the wall and spent some time drooling over those options and wishing we could come back for dinner.

I ordered The Rubi (Tempeh Benedict) – smoky grilled tempeh resting on homemade english muffin, sautéed spinach, mushrooms, onions and marinated tomato. Topped with a vegan citrus béarnaise sauce. The tempeh was packed with flavor and sliced thin. Baked, I think. Everything else complemented it well. It was definitely a winner. It also came with sweet potato hash and fresh fruit. Here is a blurry picture thanks to the fact that my camera only focuses when it feels like it. I’m sure someone on some blog will make a snarky post about crappy food porn pics. That person can bite it. 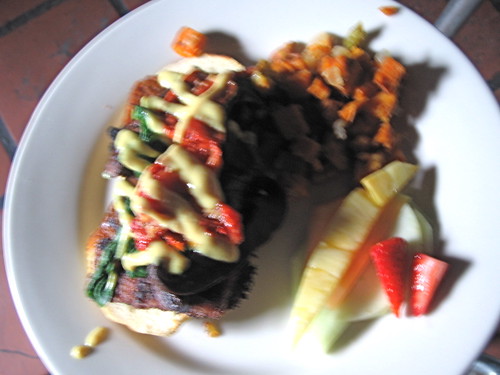 Kevin got the French Toast with Warm Apple Compote – Billy Bread dipped in sweet apple sauce batter and griddled. It was good, but apparently didn’t come close to touching the french toast at Pick Me Up Cafe in Chicago. 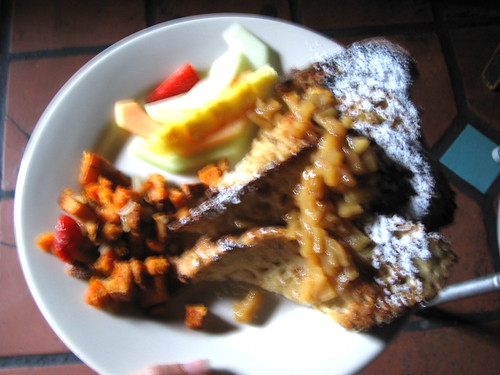 The girl at Harrison Street said we HAD to get a piece of pie at Ipanema. Just as we were getting ready to ask about that, the bartender came out with a free piece of blueberry pie for us since we were from out of town. How cool was that? It had a shortbread crust with a tasty, crunchy streusel on top. It was really good, but the baker in me is always thinking of things I’d do differently. Can’t help it. 🙂 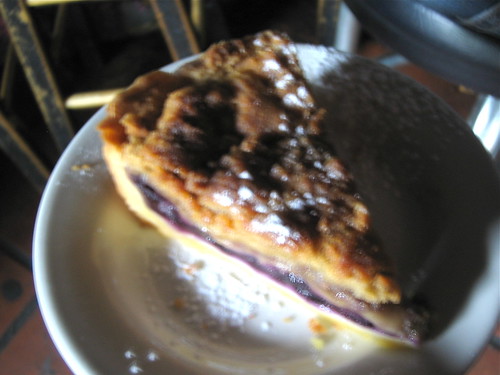 I don’t know what we’re going to do about food today. Harrison Street and Panda Veg are both closed. Time to hit up Happy Cow!