Or at least on Paradise Island and in Nassau. We stayed at Atlantis and ended up eating most meals there. If you can completely ignore how much stuff costs, you will probably be okay there. Even so, I’d suggest bringing in provisions. Here I’ll just tell you what we did. Hopefully it’ll be helpful to someone.

We got in Tuesday around lunch time. Atlantis has a Johnny Rockets on site, so we just hit that. A little shy on veggies, but it got the job done. Plus it was really filling. So when we had a function with hors d’oeuvres later, we ate the one we could eat and were good with it.

Wednesday morning we had our first diving lesson, so we wanted to eat light. Okay, I’m about to launch into a testimonial for Pro Bars about now. I already knew they were tasty. But I didn’t know they’d really hold up as a meal replacement, even through a bunch of physical activity. And they were the perfect thing to have if you don’t want a big ol’ full stomach.

I think we just snacked a little in the afternoon and played in the water. For dinner, we went to Carmine’s in the Marina Village. It’s Italian food served family style. The waiter was very accommodating. The menu was not exactly veg friendly, but we were able to piece together something. Apparently they make their pasta, so it’s all eggy. But they did have some dried pasta on hand. I think it was gluten free. They tossed that with oil and garlic. It was okay and filled the tummy, but not even close to as good as something I could whip up at home. They have sides of veggies you can order. If you ask for steamed it’ll be vegan. So we got broccoli. I chopped some up and tossed it with my pasta. They also had an appetizer we could have which was actually really good. It was grilled portobello mushrooms on a bed of spinach (although the menu said arugula) tossed with balsamic vinegar and olive oil. I’m not a giant portobello fan, but these were really nice.

Thursday, we weren’t diving until the afternoon so we got room service. They do have soy milk, so I had granola. Kevin had plain bagels with jelly. Oh, and there are at least 2 Starbucks at Atlantis so you can get your coffee and soy milk fix. Before diving, we just had Pro Bars for lunch. Again, they held up through the activity just fine.

Thursday night we decided to venture across the bridge into Nassau for dinner. We saw an Indian restaurant, Clay Oven, on the way in from the airport and decided to try that. We’re a little spoiled when it comes to Indian food since we have some really amazing restaurants here in Atlanta. But this was good, if dumbed down a bit. But they were really nice and had a number of things they could make vegan for us. Kevin had Aloo Ghobi (potatoes & cauliflower) and I had Vegetable Korma. And we were able to have Roti as well.

Friday morning we snacked on provisions and ate leftover Indian for breakfast. I don’t remember eating lunch, but we headed into town again that night, this time to Thai Lotus. We stepped in there after Indian food the night before to see if they had anything we could eat. Again, we had options. They had tofu and would basically sub it into any of the dishes. And they were cool about leaving out the fish sauce. We had vegetable spring rolls and then Kevin had a Stir Fry Ginger with Tofu which was good, but was a pretty standard stir fry. I had the Thai Green Curry with Tofu and it was as good as any I’ve ever had. Afterwards, we headed to the ice cream shop in the Marina Village and had some sorbet. 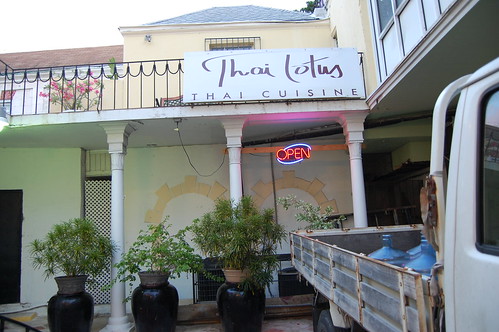 Saturday morning we were diving again, so bars for breakfast. After diving we went to Johnny Rockets again for lunch. Dinner was a function. The resort caterers seem to think vegan = flavorless. But it was the veggie burgers from earlier were filling enough to carry us through so we weren’t starving.

So that’s what we ate. There’s also the Sivananda Ashram Yoga Retreat right down the beach from Atlantis. They have a vegetarian buffet you can get for brunch or dinner. We didn’t try it because the woman sounded a little sketchy about what may or may not be vegan and gave the impression that we’d have a hard time finding out about the ingredients. But it might actually be a good option.