Whenever new vegetarians or vegans ask about cookbooks, I’m pretty quick to recommend Vegan Italiano by Donna Klein. The recipes are pretty simple, the ingredients easy to find and it doesn’t rely on meat substitutions.

One of the recipes I like to take to cookouts is the Potato and Green Bean Salad. It’s great at room temperature, is pretty and actually has vegetables in it. If you want to take it up a notch, use purple potatoes. See? 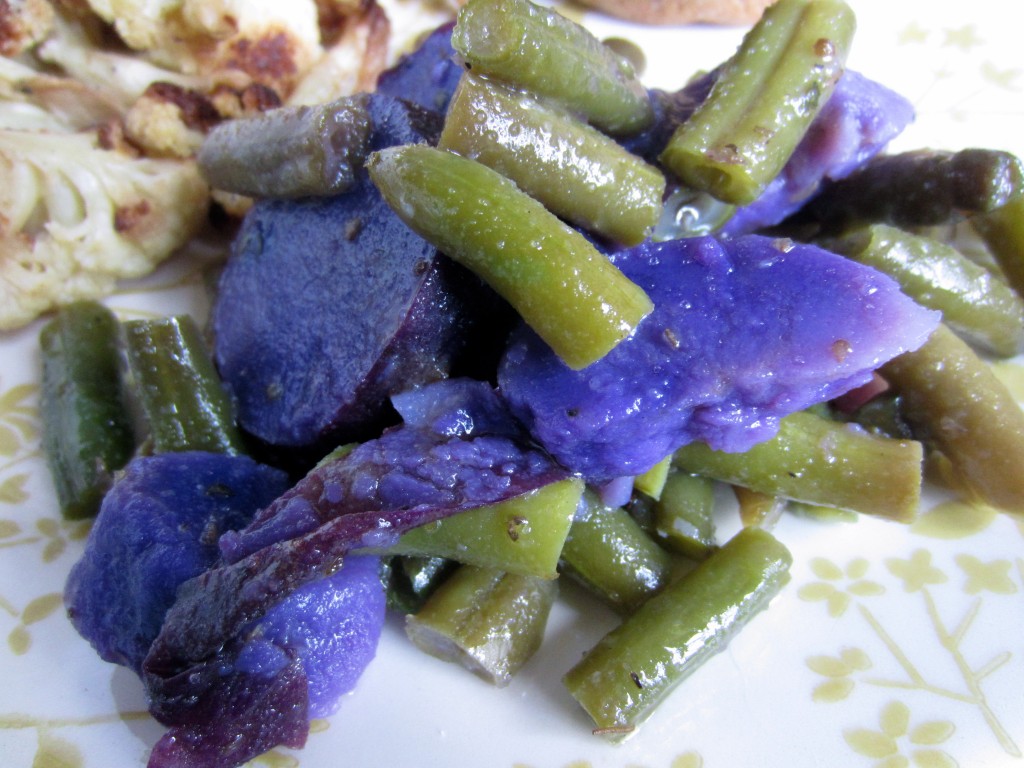 This time I totally cheated and used frozen, pre-cut green beans. It made a nice side to my burger along with some roasted cauliflower. 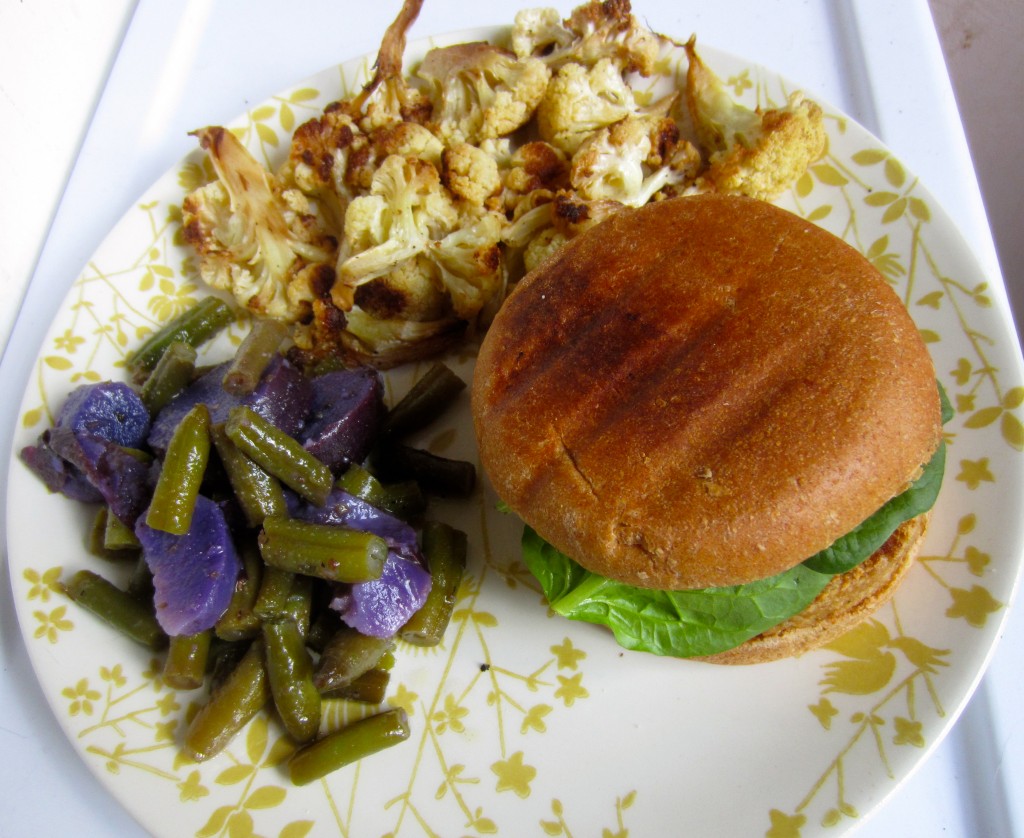 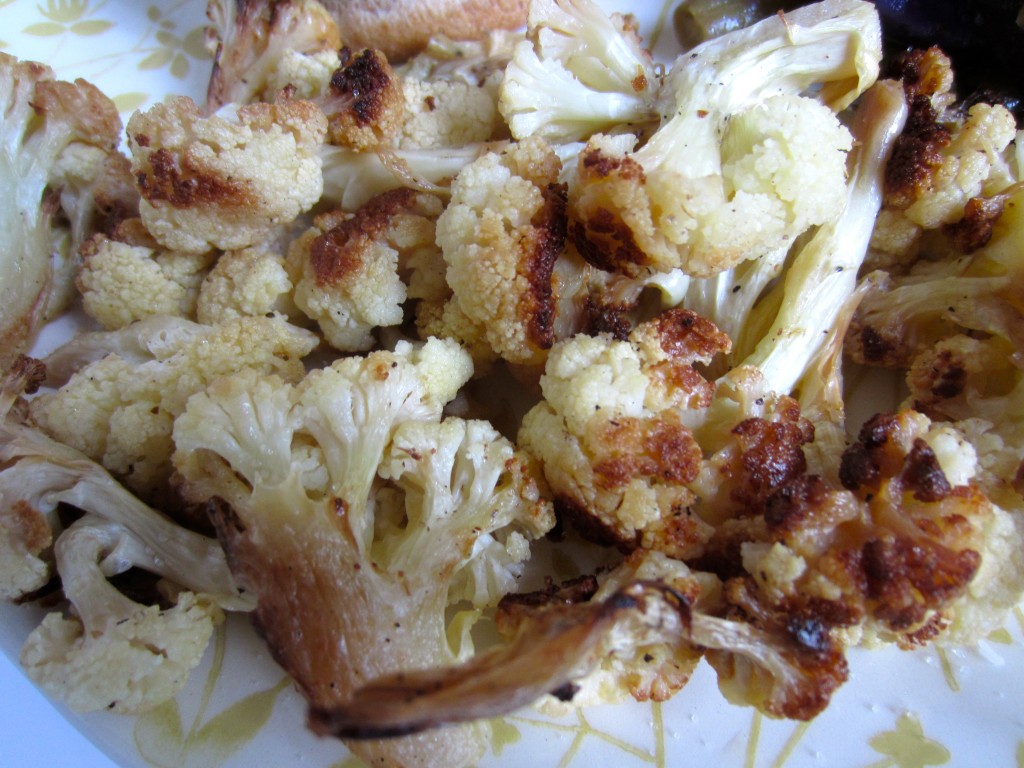 While we were chasing our favorite Indian chef all over town, we skipped most of the other restaurants in favor of his. Now that we can’t find him, we’ve had to branch back out. First Chat Patti and now Saravana Bhavan. 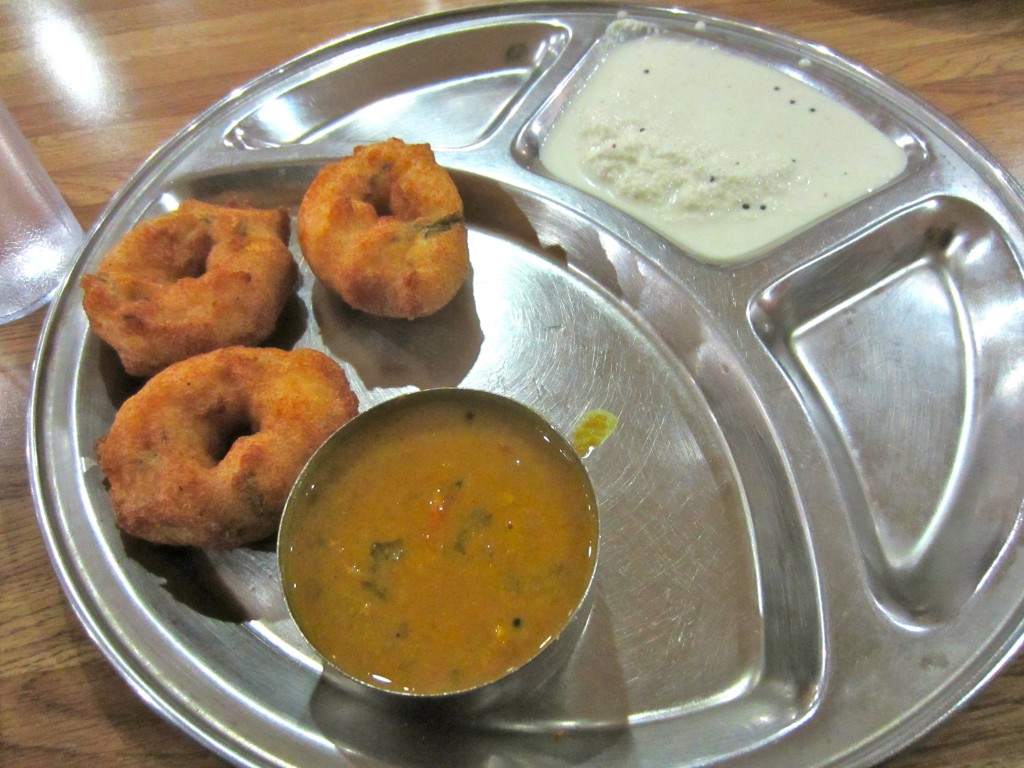 Sticking to my standards, I also got the Mysore Masala Dosa. 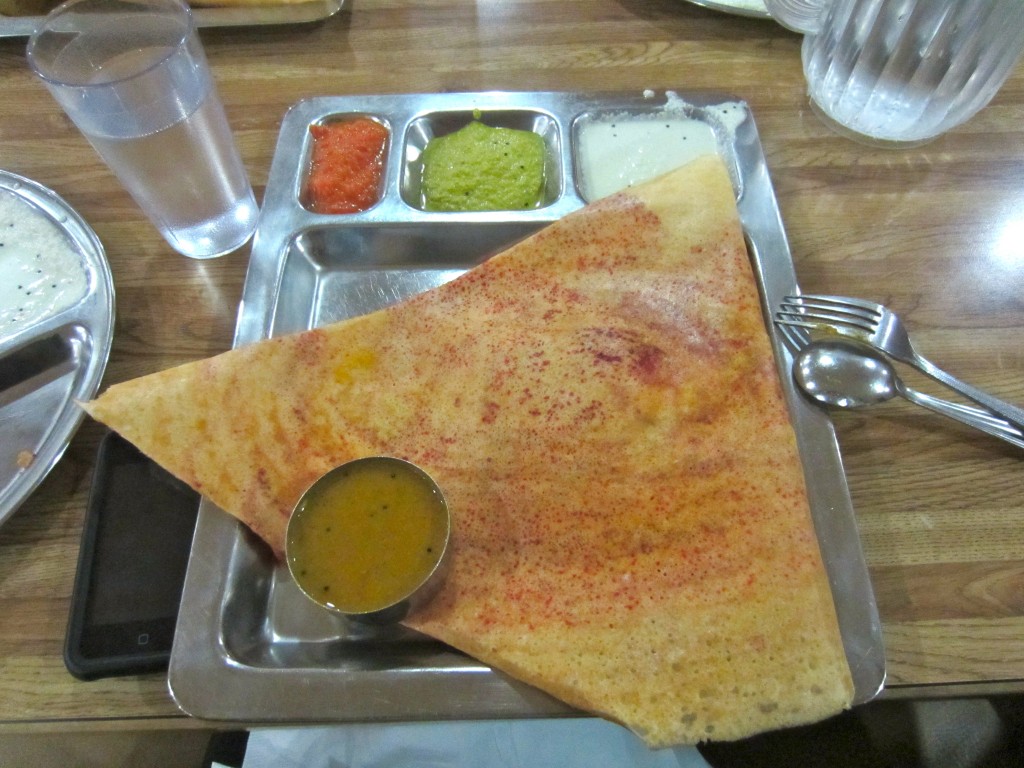 The inside is spread with a red spice mixture. It’s not really hot, but it is warming as you eat it you can feel your innards getting toasty. 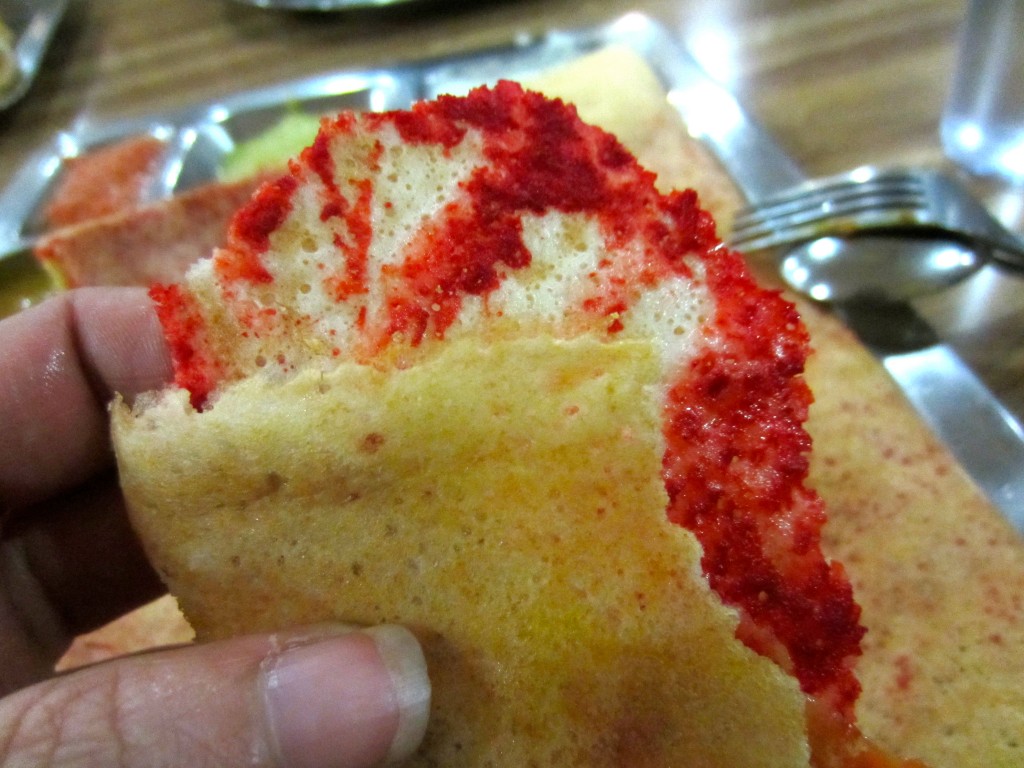 And I finally made it to the blob of potato goodness in the center. It was a little bit oily, but not too bad. 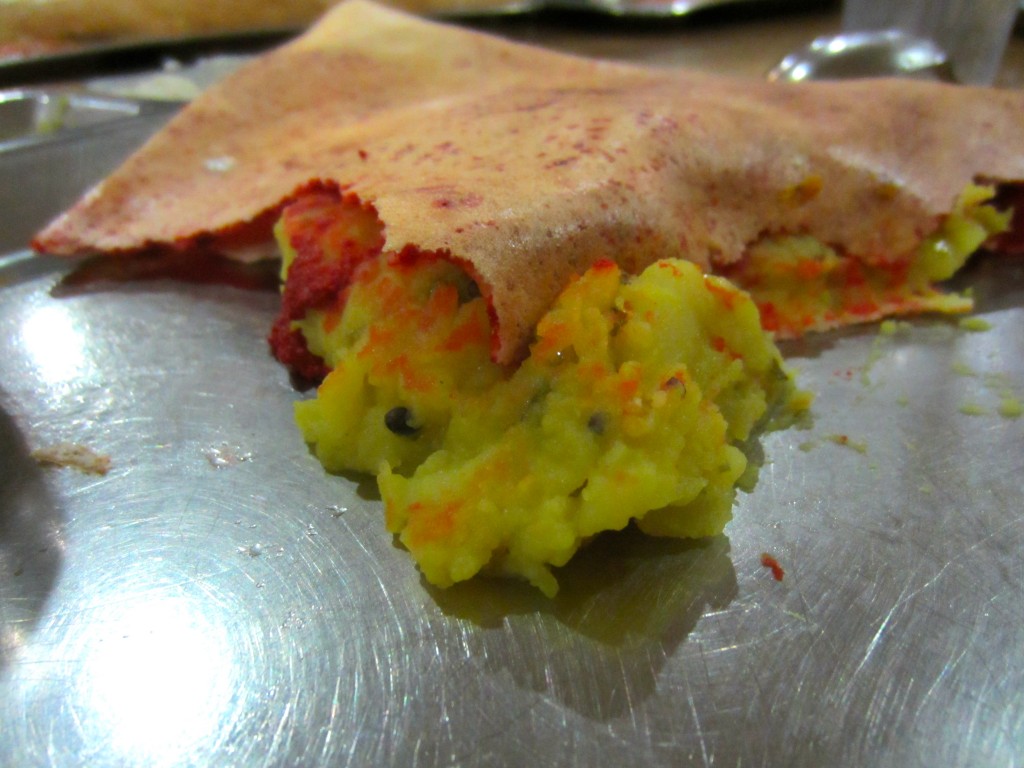 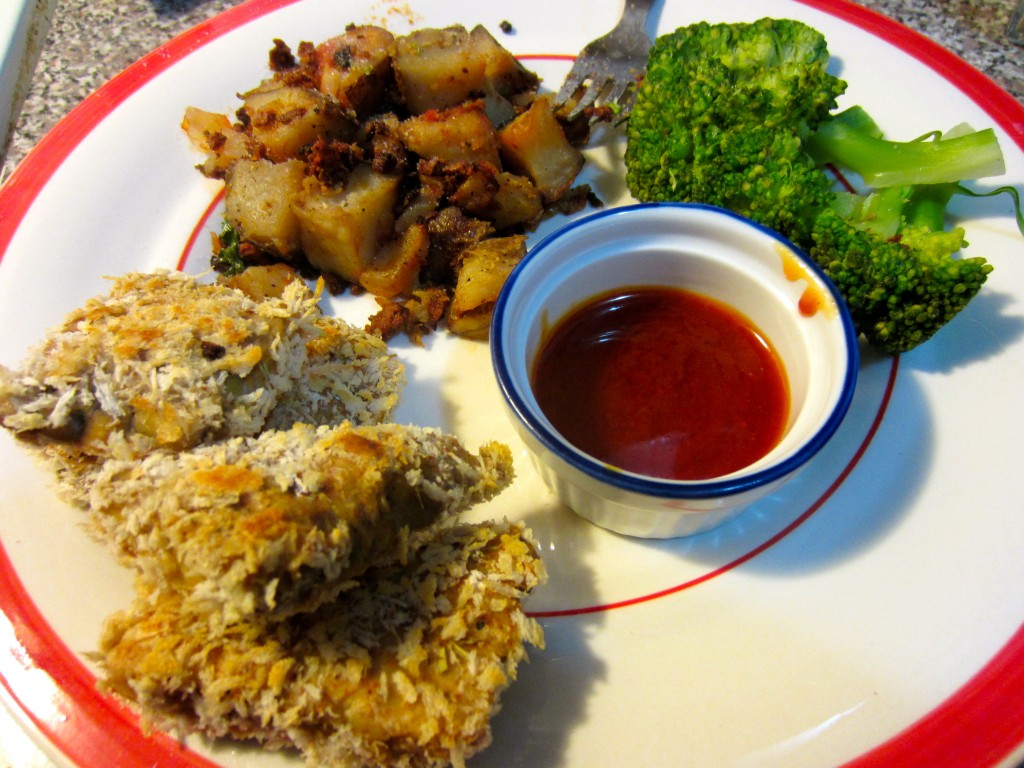 The tempeh wings from the Don’t Eat Off the Sidewalk zine are always popular around here. They’re much better for you than the processed wings you can get. I’ve successfully cut back on the Earth Balance in the sauce before, but didn’t bother this time. I like my sauce on the side so the wings stay crispy. On the side we’ve got some leftover breakfast potatoes and steamed broccoli. 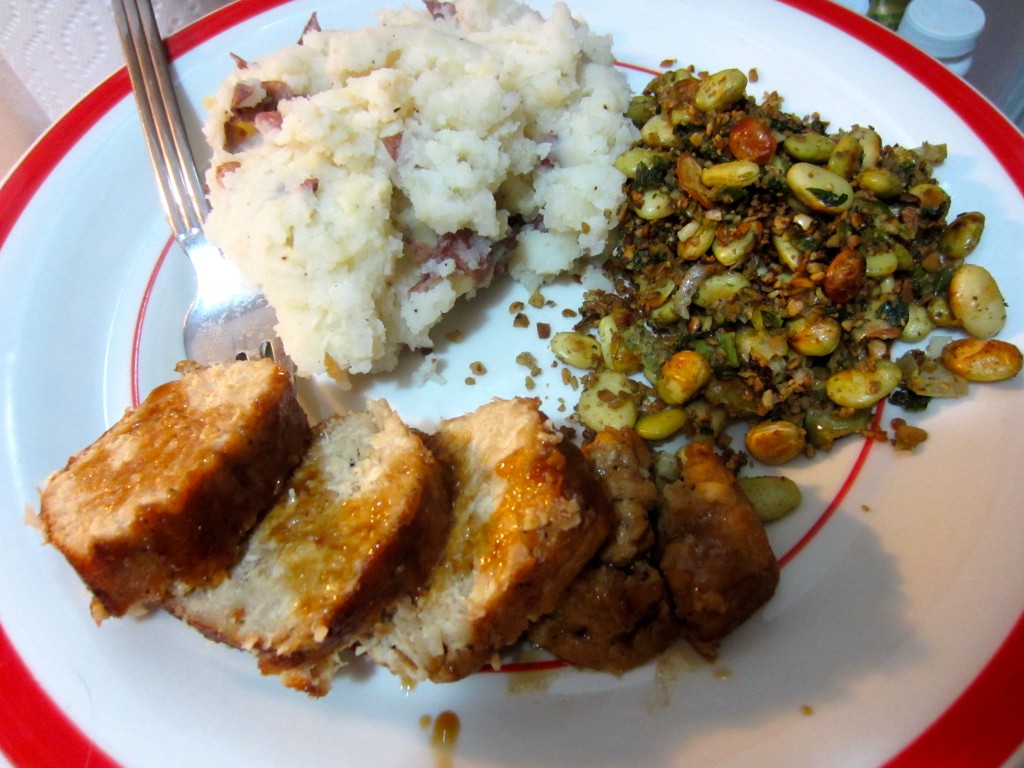 Our CSA box contained fresh lima beans. Seems like all the recipes I have call for dried or frozen. After googling around a bit for ideas, I settled on this recipe for Tok-cel Lima Beans. So, I don’t know what the deal was with those limas, but they never softened up. Not even after microwaving leftovers. I ate them anyway and the flavor of the recipe was good, but I don’t know if my limas were weird or the recipe was off. If you make it, I’d boil until nearly done, then finish the recipe. That should work.

The “pork” is Match Meat.  It was just defrosted, seasoned with salt and pepper and rolled into a tube like a tenderloin. Again, I consulted my googles for tenderloin glaze ideas. This maple glaze was super easy and tasted great. Then I seared the tenderloin in a frying pan. After it was seared, it was basted with the glaze and then it cooked again on all sides in the pan on low heat, glazing as needed. I drizzled the extra on top after it was sliced.

The mashed potatoes were, mashed potatoes. I’m lazy and leave the skins on pretending that I do it because it’s healthier. I add a couple of cloves of garlic to the boiling potatoes and mash them in with Earth Balance and non-dairy milk. Since I was trying out that Good Karma Flax Milk, I used it. Worked great!

True, I have blogged about Alicia’s Papa Chorizo Frittata before, but it was 3+ years ago so let’s do it again! There were a few changes this time. It’s now my habit to bump up the nutritional yeast in any eggy recipe. And I also add a bit of black salt. Instead of roasted red peppers, I just used fresh bell pepper fried up with the potatoes and chorizo. 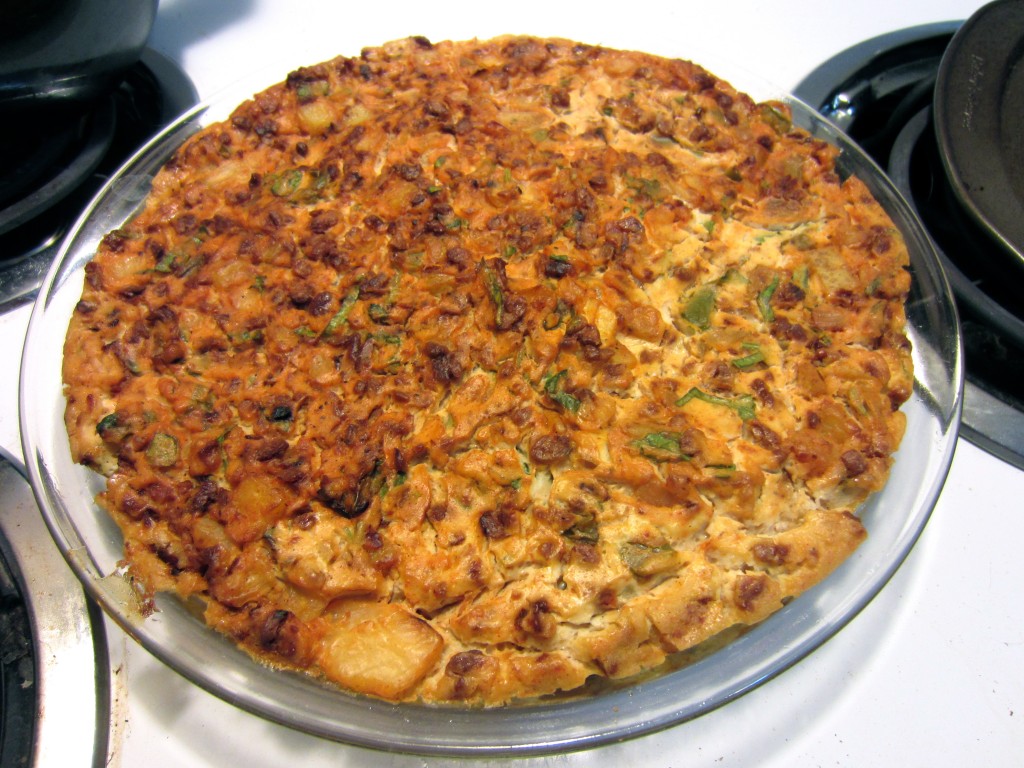 This makes an awesome potluck dish since it is good warm or at room temperature.

I also busted out a quick batch of biscuits to go with it. 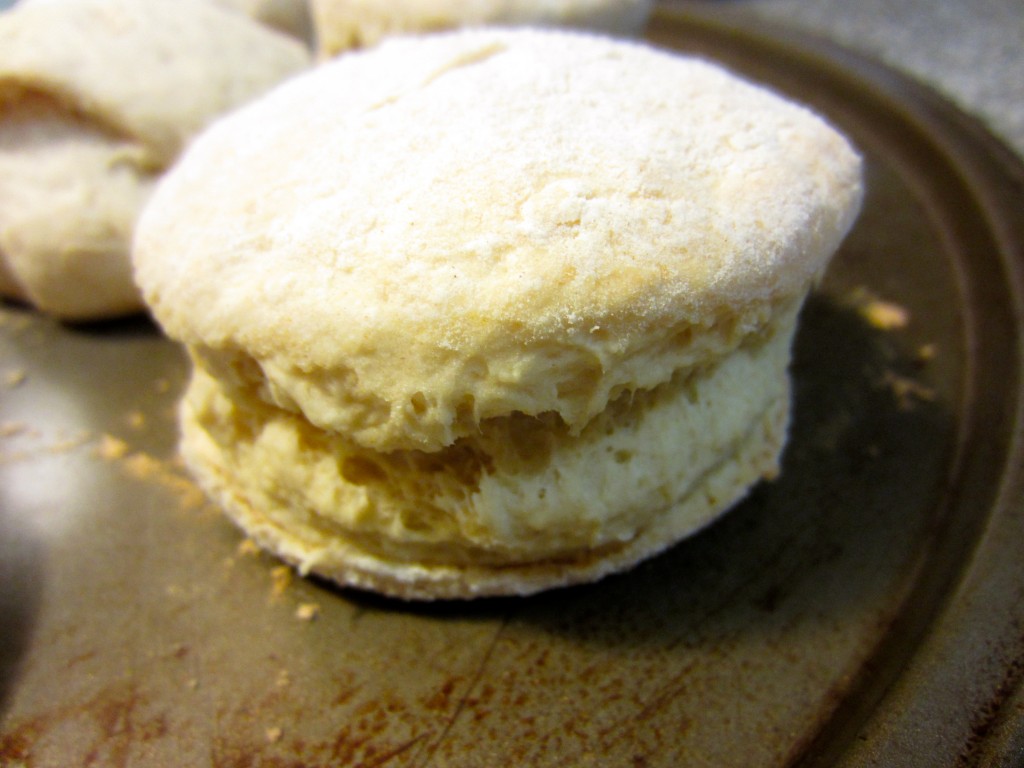 And we had a pile of raw kale salad on the side. Kale is a bandwagon I don’t mind hopping on. It’s delicious! 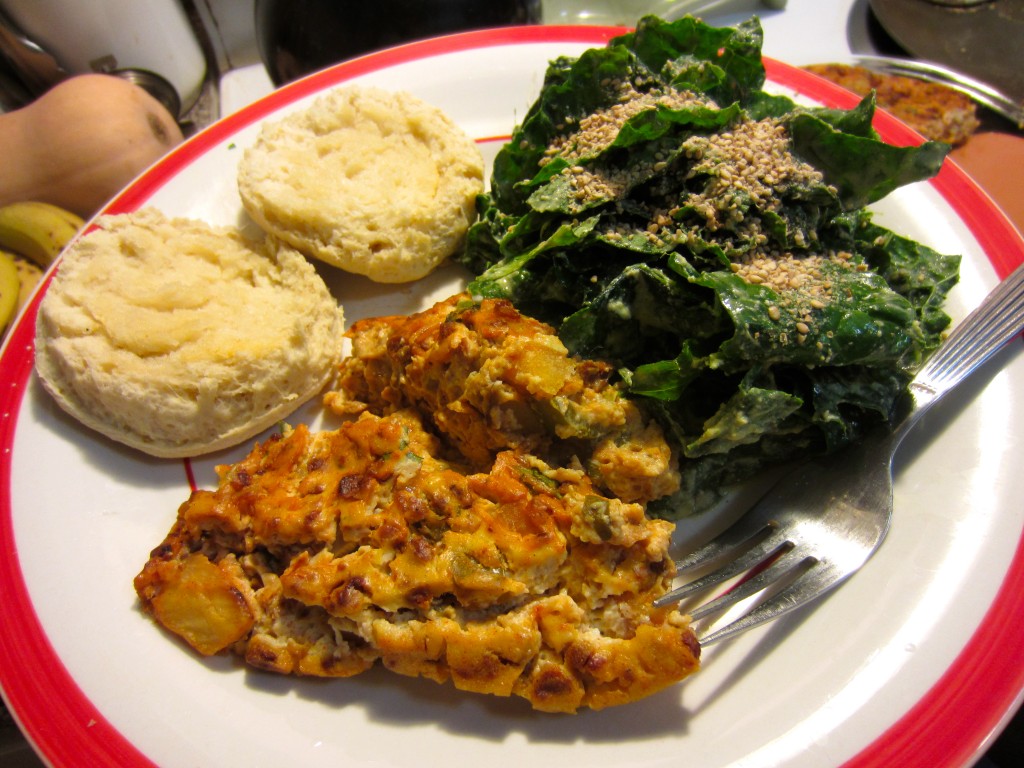