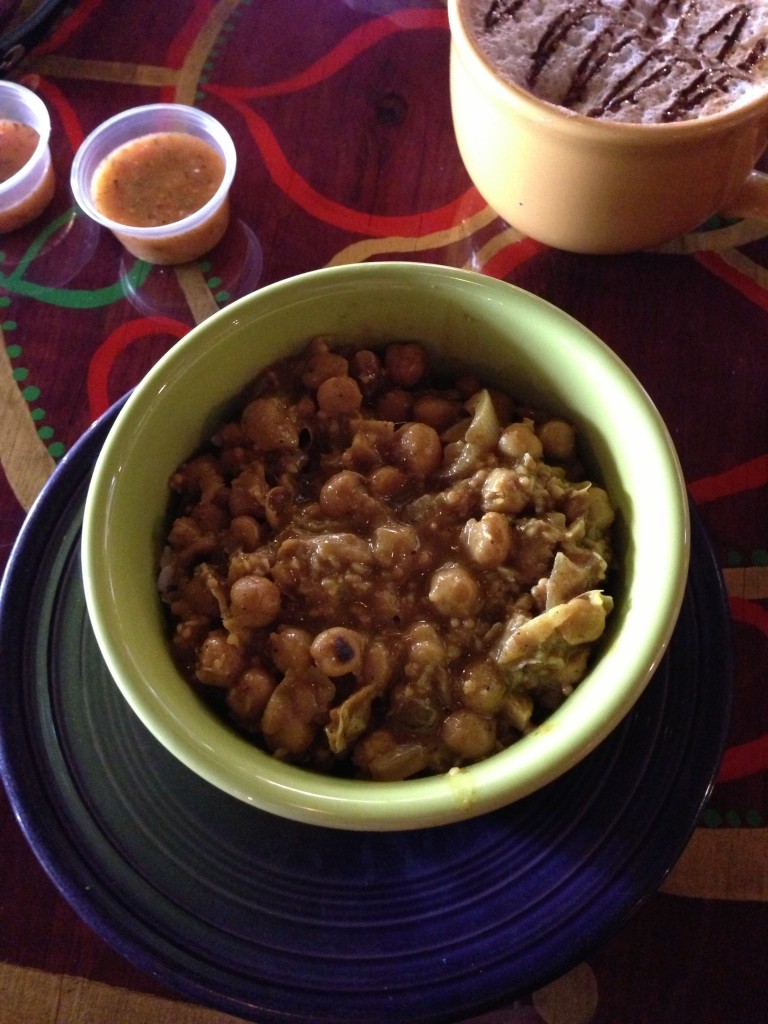 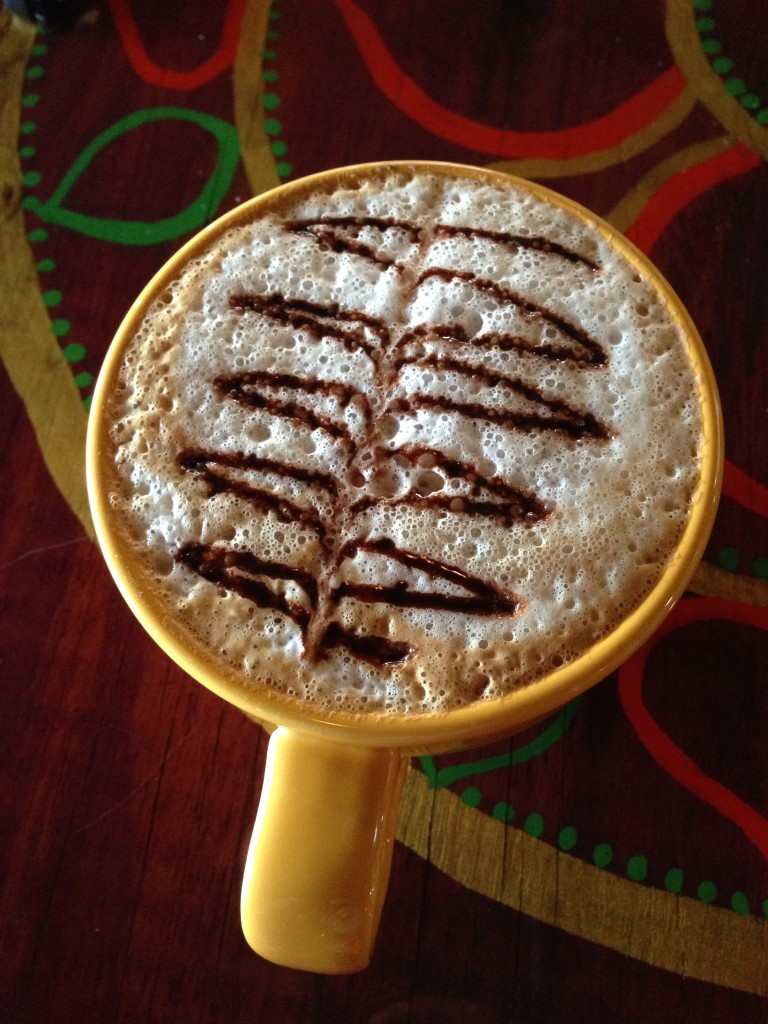 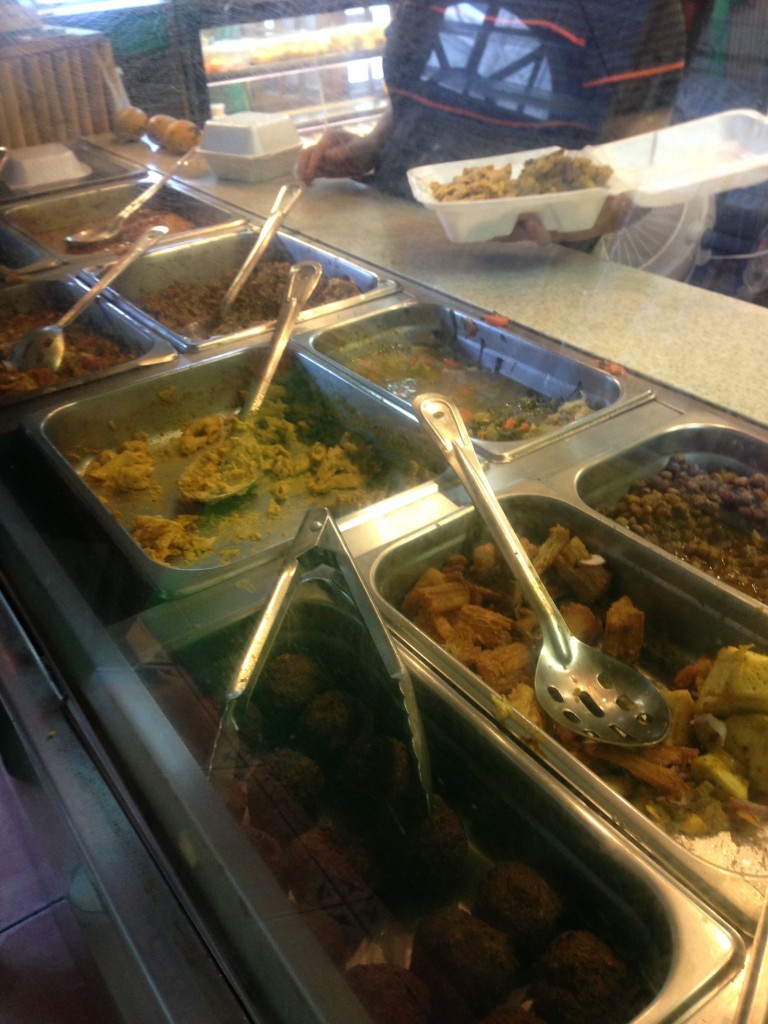 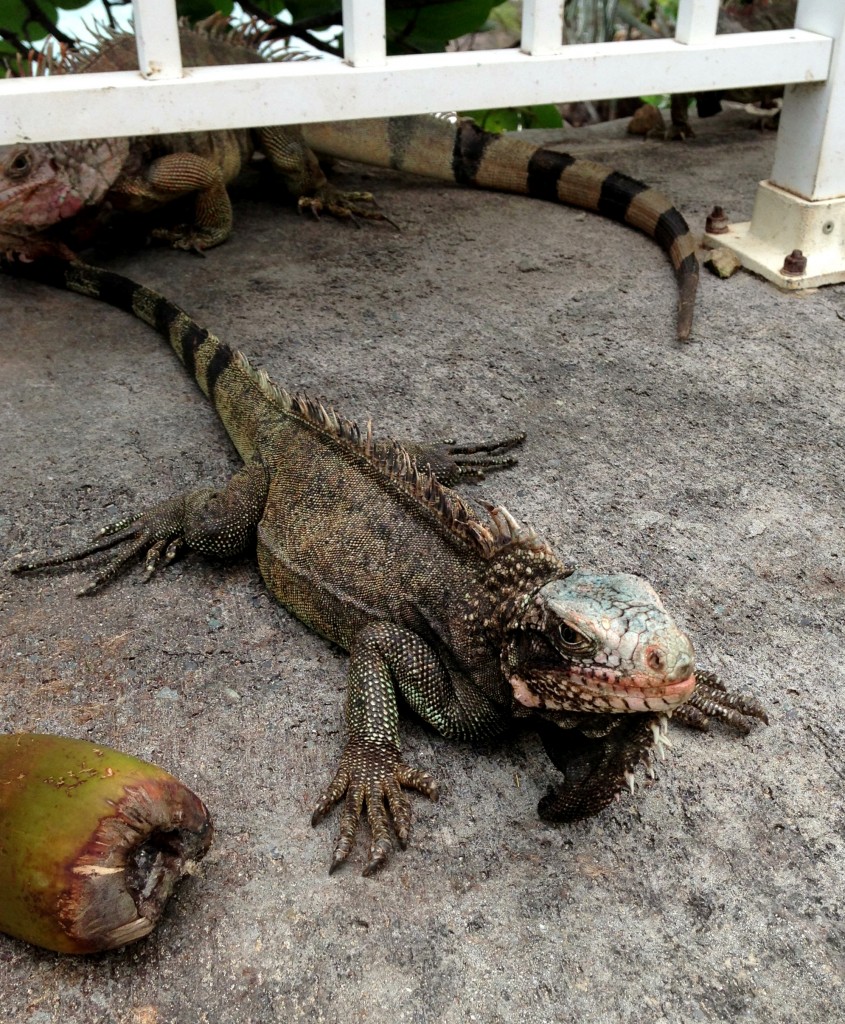 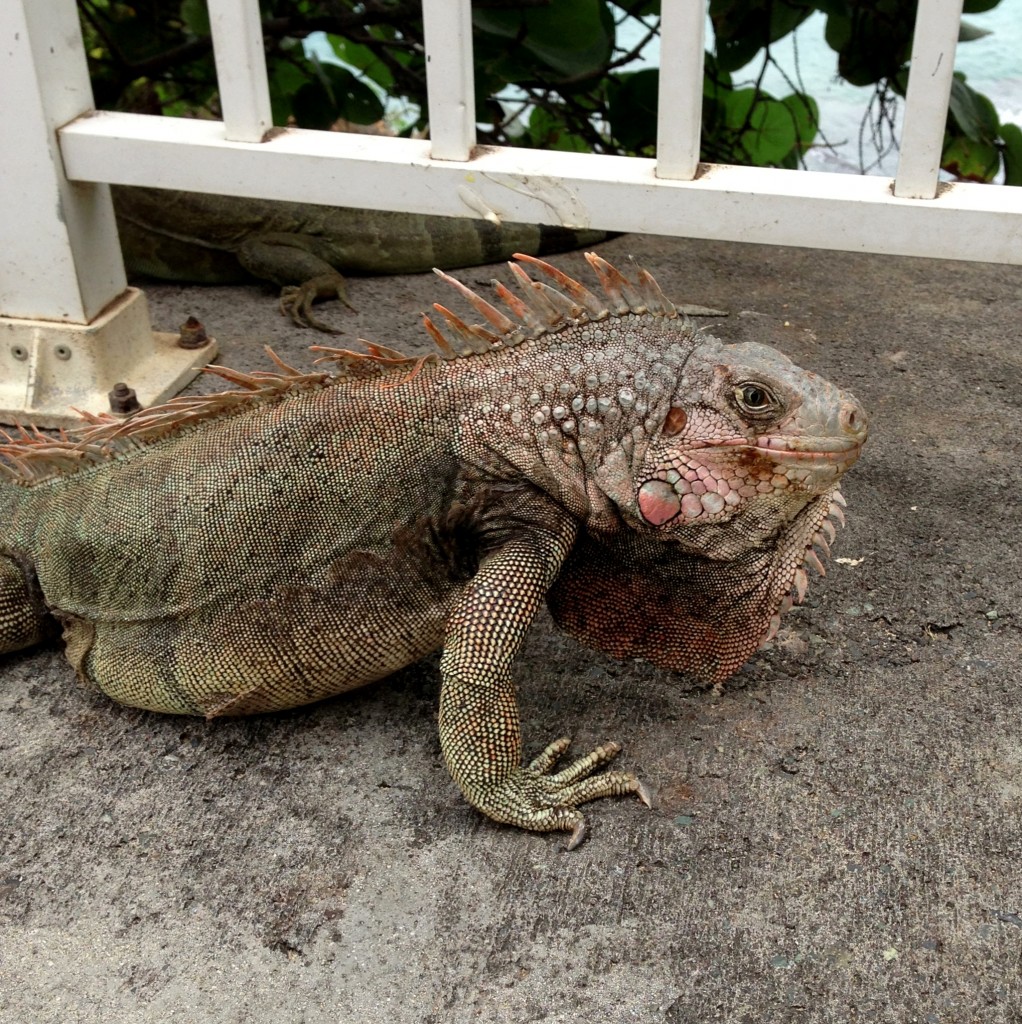 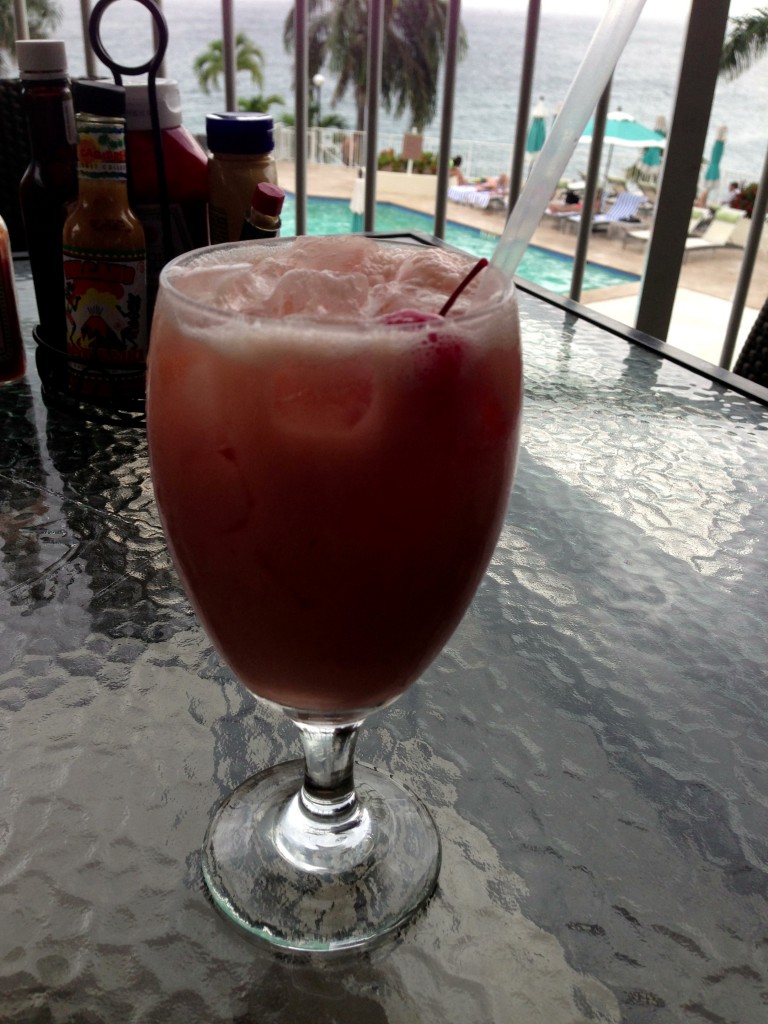 As glorious as it was to escape Atlanta for a nice warm vacation, it was definitely jolting to come back to the cold and/or nasty of this week. If you want to relax, turn your brain off, read a bunch of books, and be warm, I can highly recommend a caribbean cruise. I was in the sun with a book whenever possible. What I don’t like is that if you do an excursion, you really don’t get to experience the port.

Okay, what you really want to know is what did I eat, right? Even though Royal Caribbean says on their website that they don’t cater to vegans, they really do. You will be able to fill yourself up just fine from the buffets. My typical breakfast was a big pile of fresh fruit, steamed rice and stir fried veggies, bagel with peanut butter, potatoes in various forms, some other whole grain bread with margarine (they had a brand, Bibo, that’s vegan), sometimes cereal, soy milk (just ask for it) and coffee. Lunch, I’d have a big ol’ salad along with whatever cooked vegetables were on the buffet. Sometimes Indian food. We at dinner in the dining room. Every night they had a pasta dish as a choice, so that was always an option. Also, on our cruise, they had an Indian dish every night that was usually vegan if you had them keep the raita. The first night was the hardest, but after that they started preparing special dishes for us. Every night we’d get a platter of roasted or grilled veggies along with the other dishes. Desserts were various fruit bowls. No, you won’t get any vegan cake. But while the omnis were gorging themselves every day on the extensive dessert bar and gaining an average of 8 pounds, I actually ate healthier than I do at home, ate tons of food, and lost weight.

Sadly they did attempt two things for us that were not good. In the past, apparently the pastry chef had whipped up some fruit wrapped in phyllo dough that was a nice dessert. We tried to explain that to them, but what they brought out was fruit wrapped in plain phyllo. Yep, no canola spray, no margarine, just plain. Er, no.

The other thing they tried to do was make cornbread. Vegan cornbread is pretty easy to make, but apparently they had no idea how to approach it. So we got this little loaf that seemed to be made of corn flour, not corn meal. And I don’t know what they used for the fat and binder. It pretty much tasted like nothing and had an odd texture. But, they did try. And honestly, we didn’t need these extra items. There was plenty of food for us.

So what about eating in port? In San Juan, Puerto Rico, we met up with friends of Danielle that took us to Cafe El Punto. Their specialty is a half an avocado filled with beans with rice and fried plantains on the side. Yum! Please excuse the blurry pic. 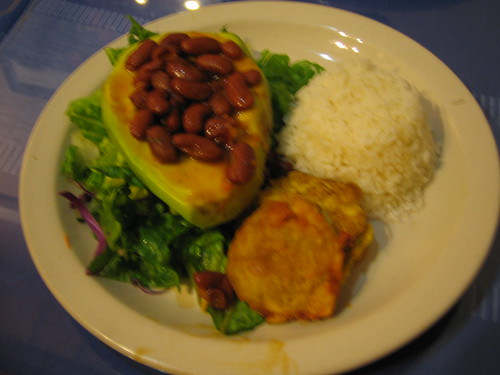 In St. Thomas, we were diving so we didn’t get to eat lunch there. (We saw a sea turtle, a moray eel and an octopus! No sharks this time though.) But there’s a place you have to hit called Rootsie’s Ital. Matt and Danielle got to go and loved it. Rootsie apparently cooks everything in a clay pot and then brings it to the shop. I’m so jealous I didn’t get to eat his food. Check out a pic of him here. You’ll find his place on the main road behind the big shopping area just past the catholic church.

We did an excursion in St. Maarten, so we didn’t eat there. Although they did serve sandwiches on the sailboat on our way back from snorkeling and enjoying the beach. Matt talked them into making us sandwiches with just lettuce and tomato. The bread was nice, so it actually wasn’t bad.

At Labadee, the ship caters the food so it was similar to what we have available on board, just much more limited. Oh yeah, there’s also a Johnny Rockets on board. But after eating all the lovely fruit and vegetables, the Streamliner was rather meh. I want someone to chop up fruit and veggies for me every day. I could totally live like that.

I almost forgot…we got to tour the ship’s galley! It is unbelievably huge. And, you’ll be happy to know, everything is separated. Meats and veggies and dairy are all kept in separate refrigerators. There are also separate cooking areas. 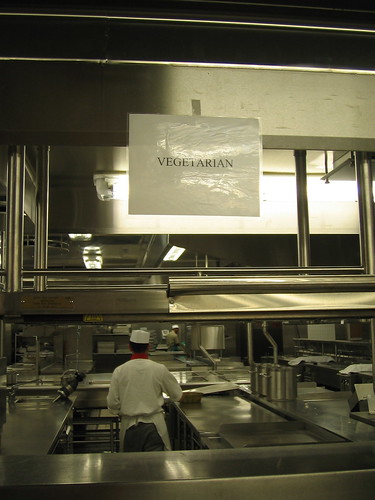 Anyway, it was really hard coming back. I never used to take tropical vacations, but they are starting to grow on me. 😉 A bunch more pics are in my flickr account. I’ll leave you with this sunset. 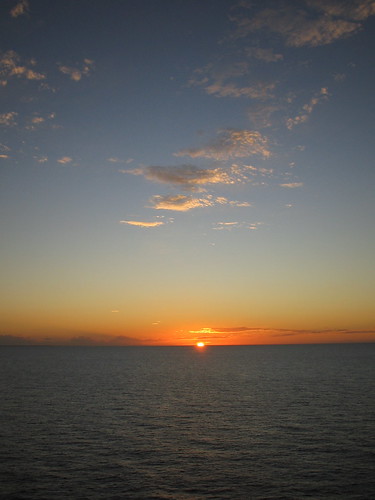