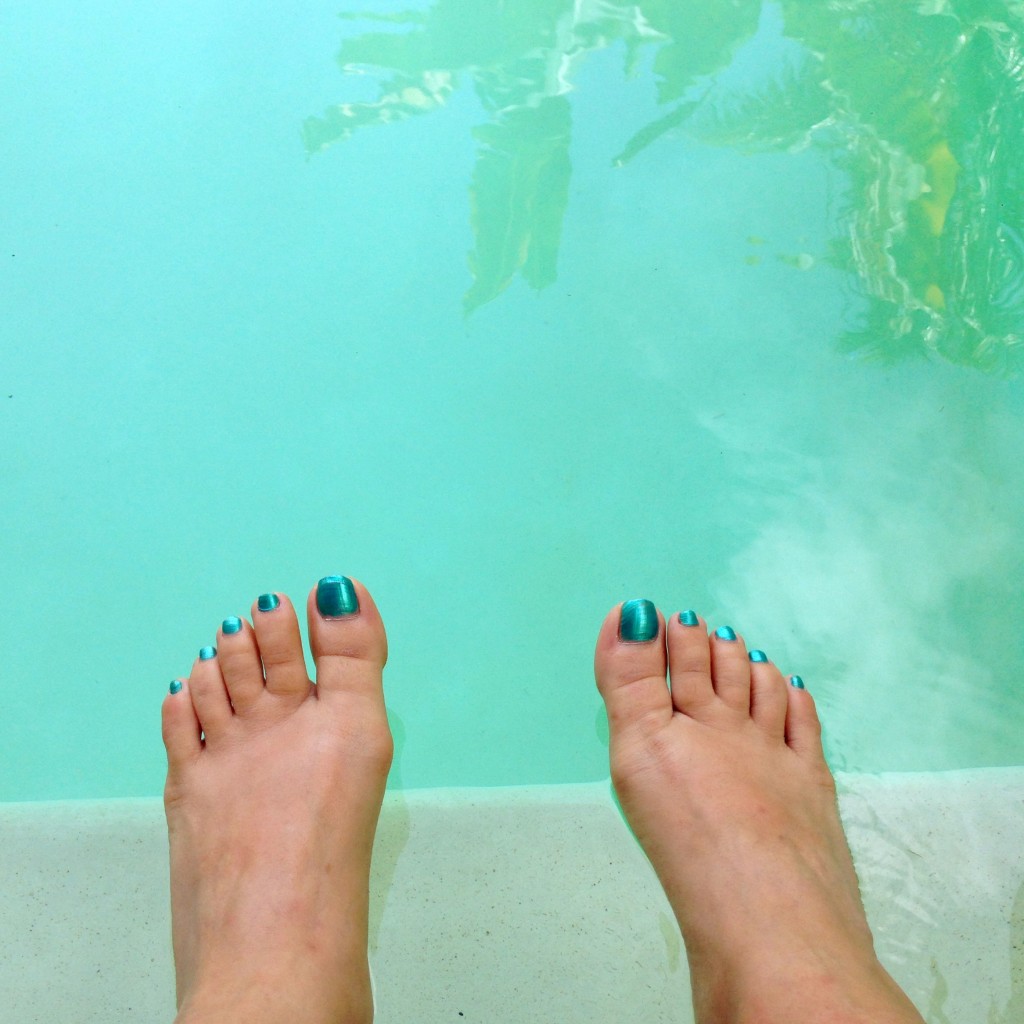 Okay, I’ve finally figured out how to break down the rest of these posts from our two week trip to Playa del Carmen. I’ve already covered the resort. This post will be about staying in Playacar hanging out in our condo. Then future posts will cover being out and about. So pics of the condo, food we made and ate there and crappy pics of some of the wildlife.

This part of the trip was kind of a working vacation. We specifically rented a spot that had decent internet. And a pool. Because pool breaks are the best. Oh, and a kitchen so we could cook. We paid a little more for amenities, but then spent less eating out. 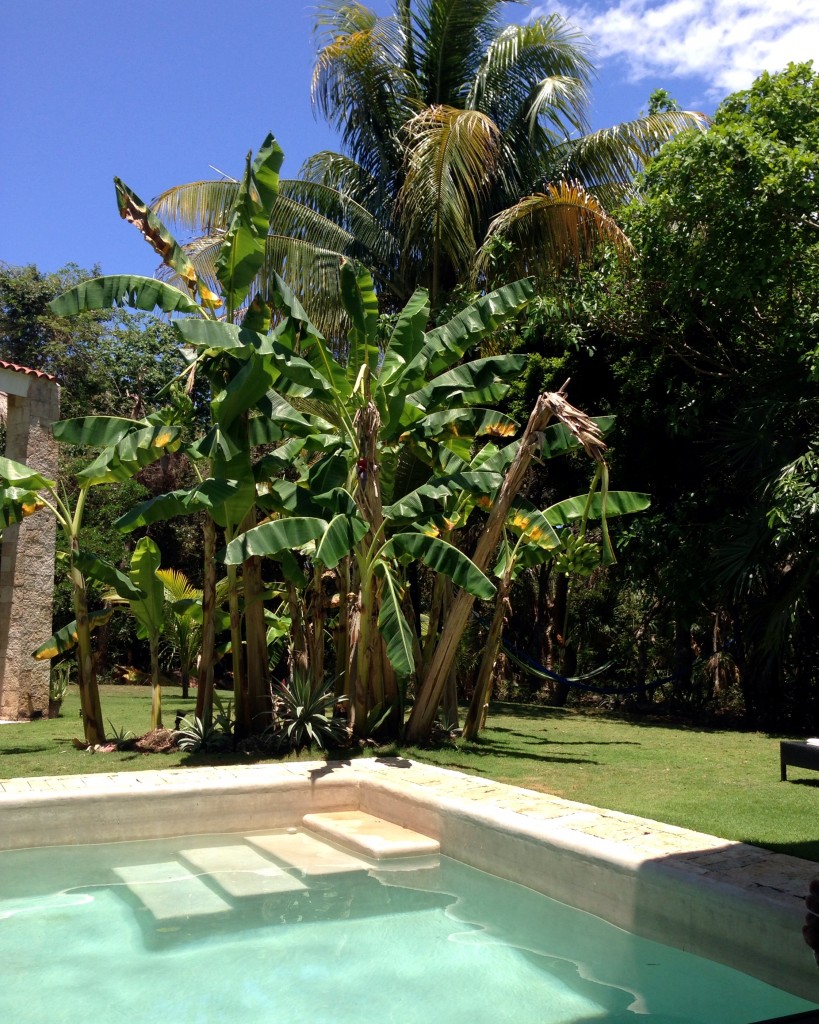 One of the banana plants in the backyard. 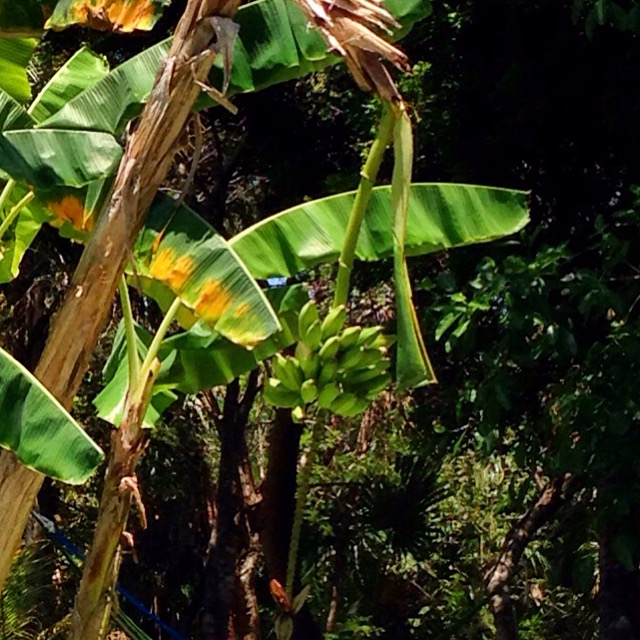 No, really, bananas and everything. 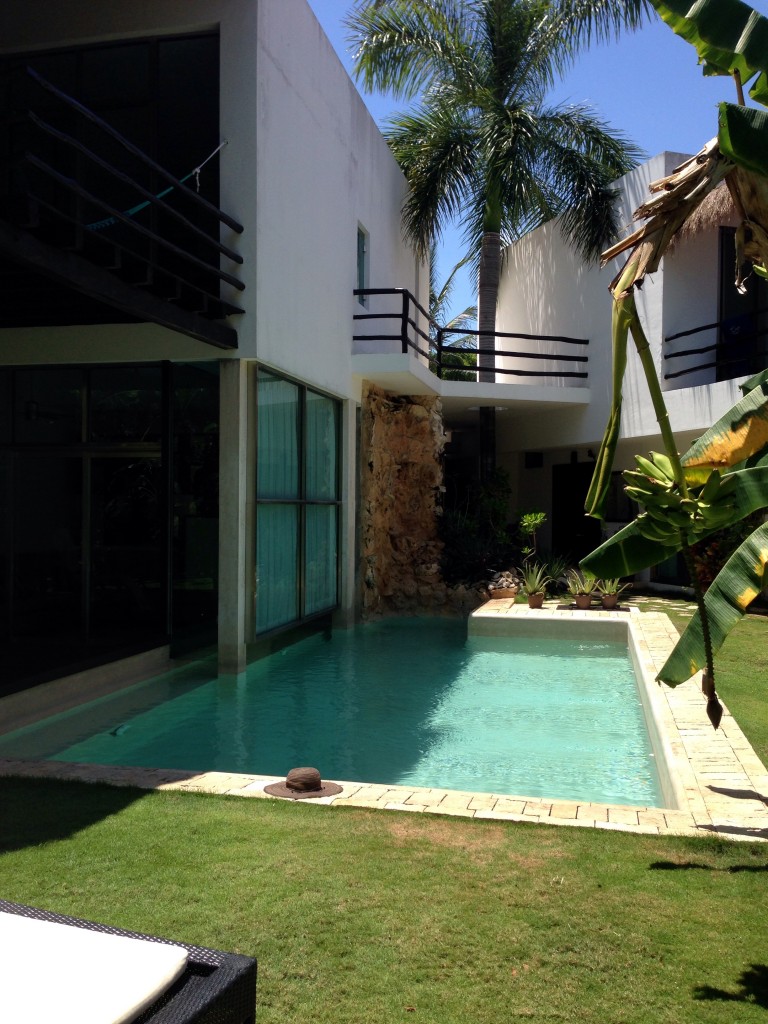 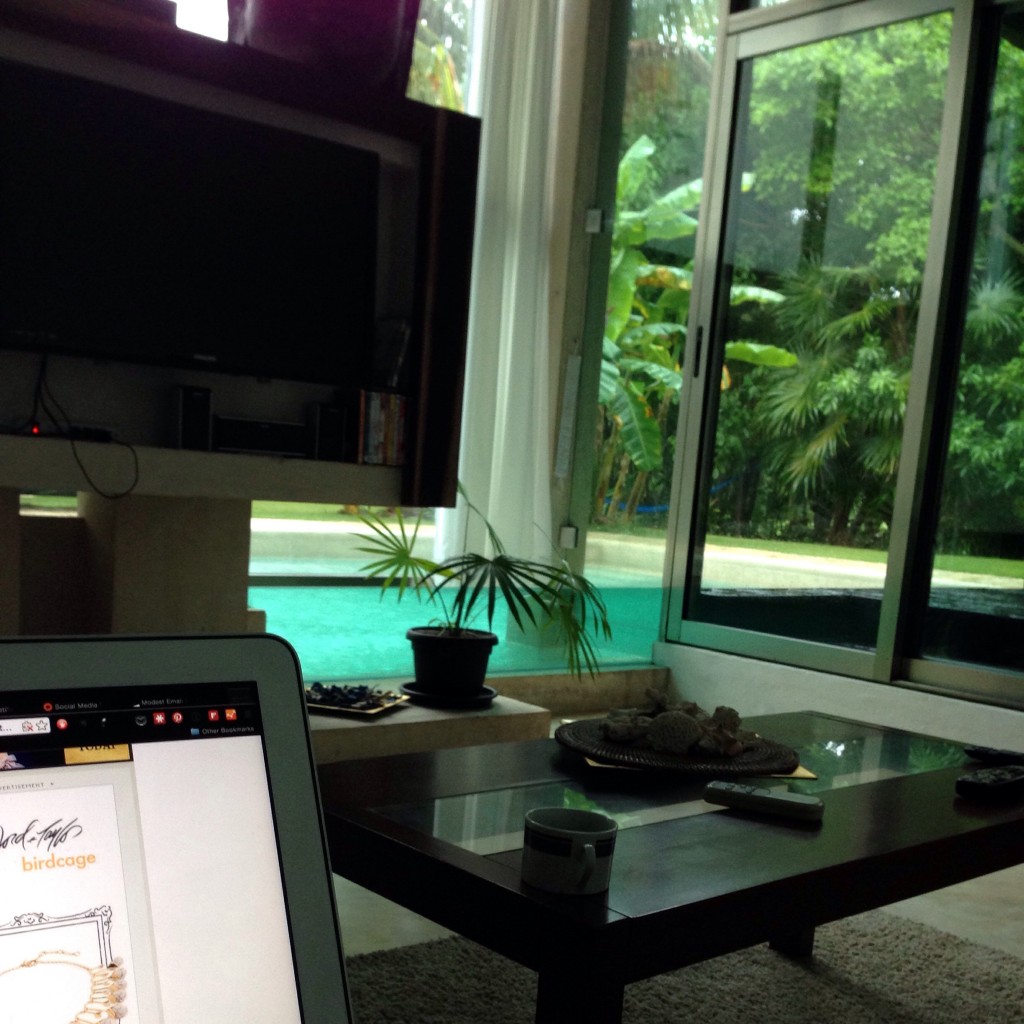 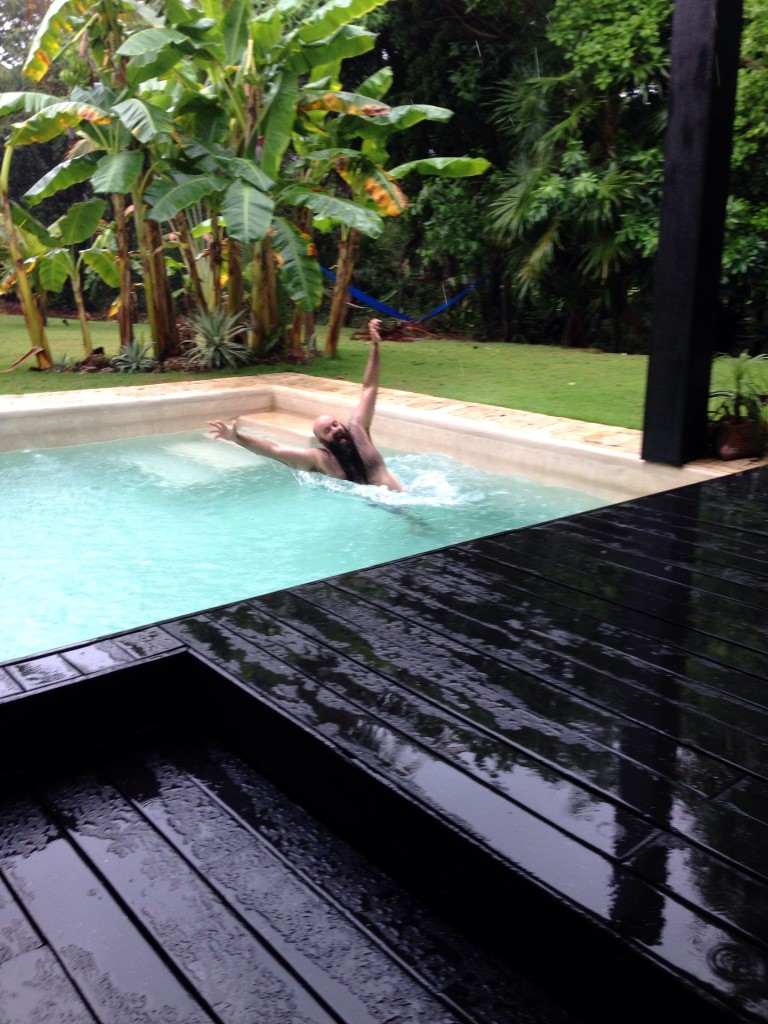 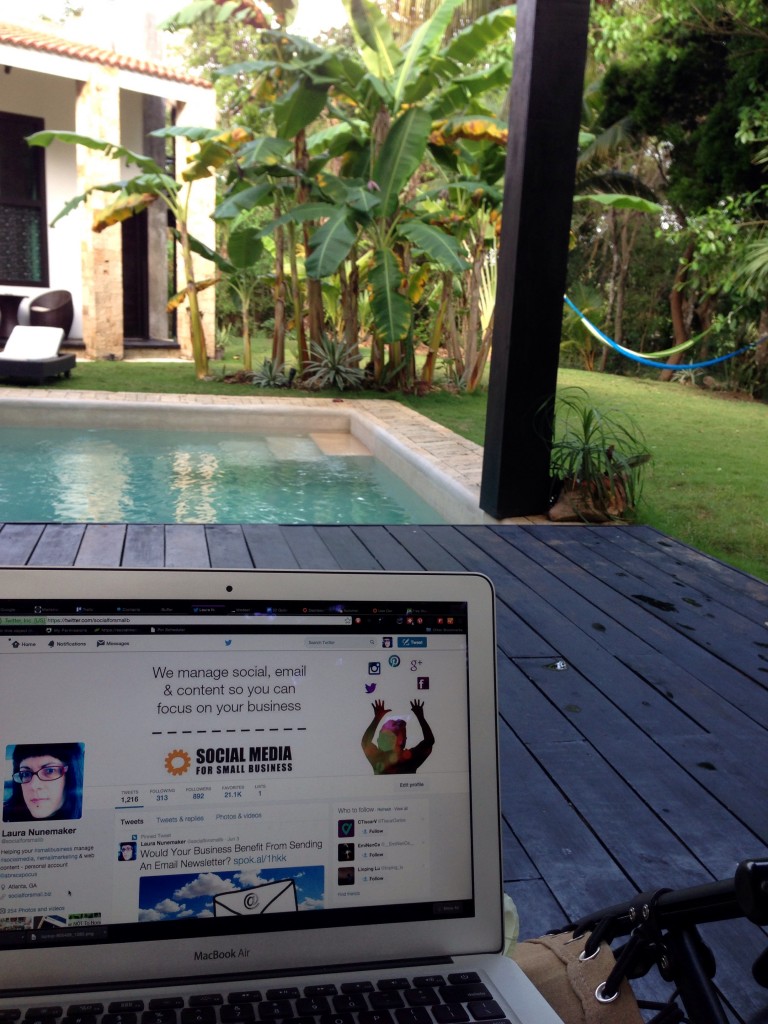 Sunday after we got checked in, we headed to the grocery store. One down side to this space is that there was salt and a carton of orange juice left for us. Usually you can expect some spices, condiments, etc. But no. So we were starting from ground zero.

Sadly, the health food store was closed, so we went to Mega, which is basically Mexico’s Wal-Mart. There’s an actual Wal-Mart, but fuck that. I’m not encouraging that shit.

This first grocery trip, I was mostly concerned with making some staples. Pinto beans, rice, tortillas, avocados, onions, garlic, green vegetables. Oh, and coffee. Non-dairy milk. Tortilla chips. Cereal. Bananas! It was a bitch carrying all this stuff back.

When we got back, I cooked up the whole 1kg bag of pinto beans. First a quick soak, and then simmered them with onions, garlic and dried peppers. These beans lasted the rest of our stay.

Rice I cooked about half a pound at a time and didn’t do anything fancy with it. Just salt to season it.

Oh, let me tell you about the avocados there. The Haas avocados were at least twice the size of ours and they lasted so long! You know how avocados turn brown pretty much the second you put a knife to them here? They lasted days there before a hint of brown. I think most of the produce is grown in the region. So they’re probably just much fresher.

While this place had an awesome kitchen set up, there was no oven. Not a problem, but I kind of wanted cake. Given the circumstances, I didn’t want to buy all the ingredients to make it from scratch. So we got some accidentally vegan cake mix and frosting. But wait, there’s no oven! No oven, no problem! Mug cakes. Combine 2 tablespoons of cake mix with 3 tablespoons of water in a mug, microwave for 1 minute. Slap some frosting on it. Mug cake. 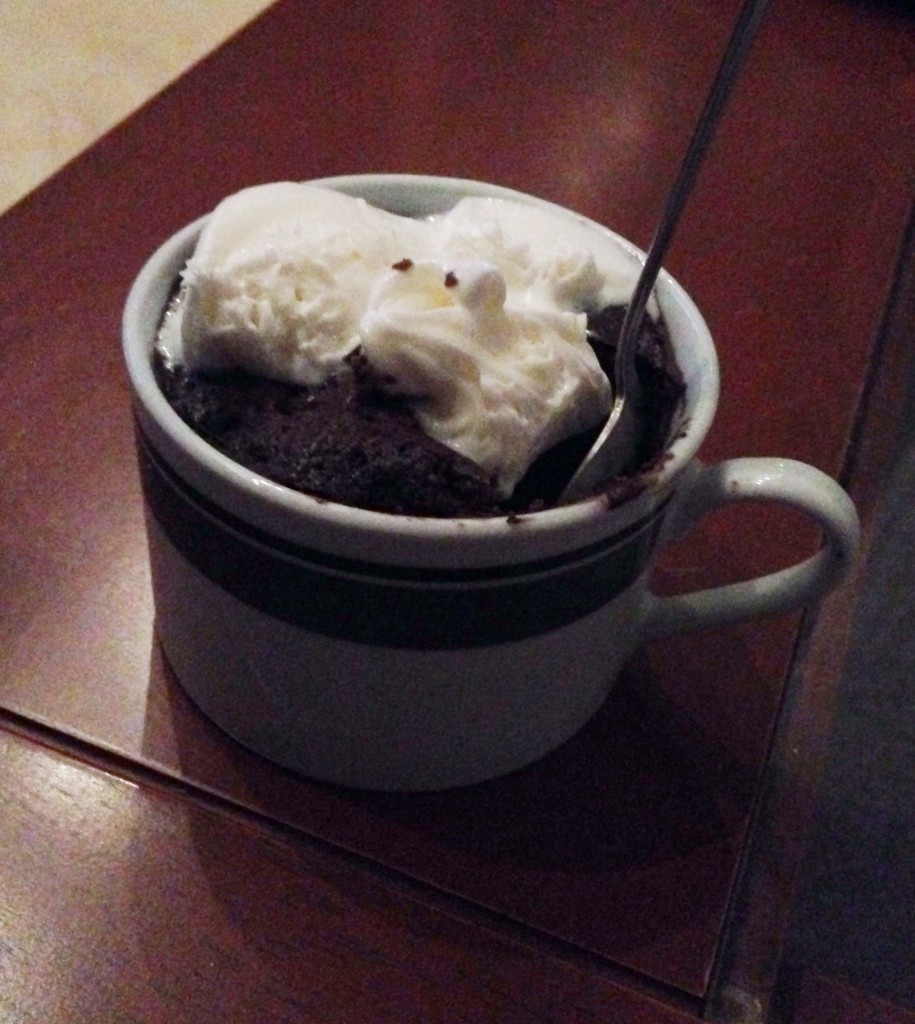 Can’t forget breakfast! We mostly had cereal with an occasional peanut butter and banana pizza. 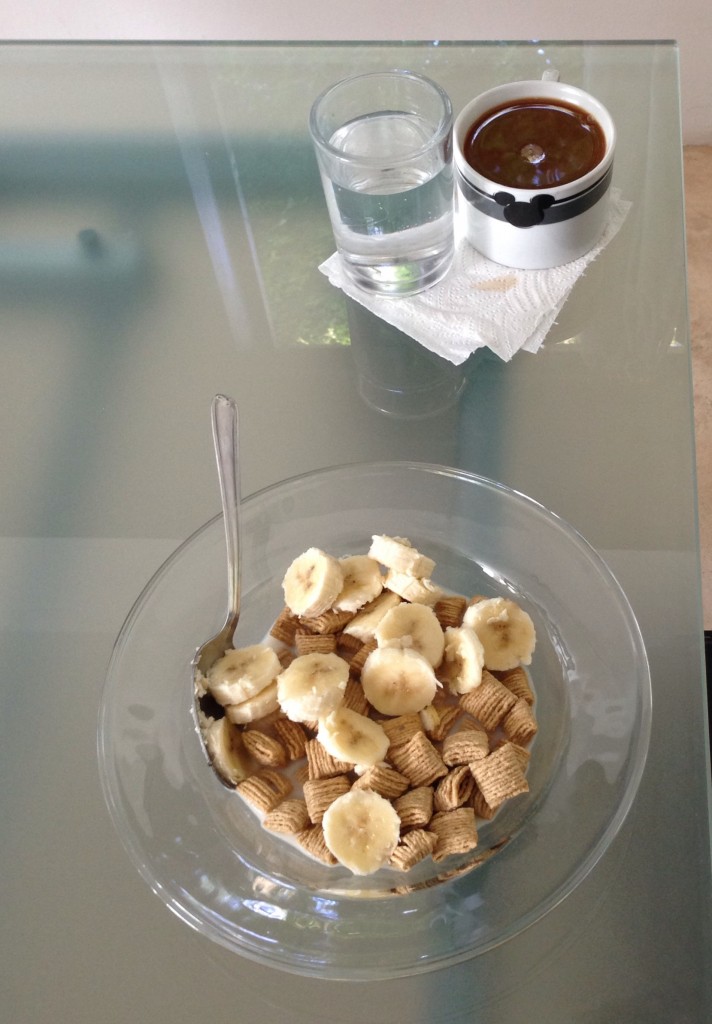 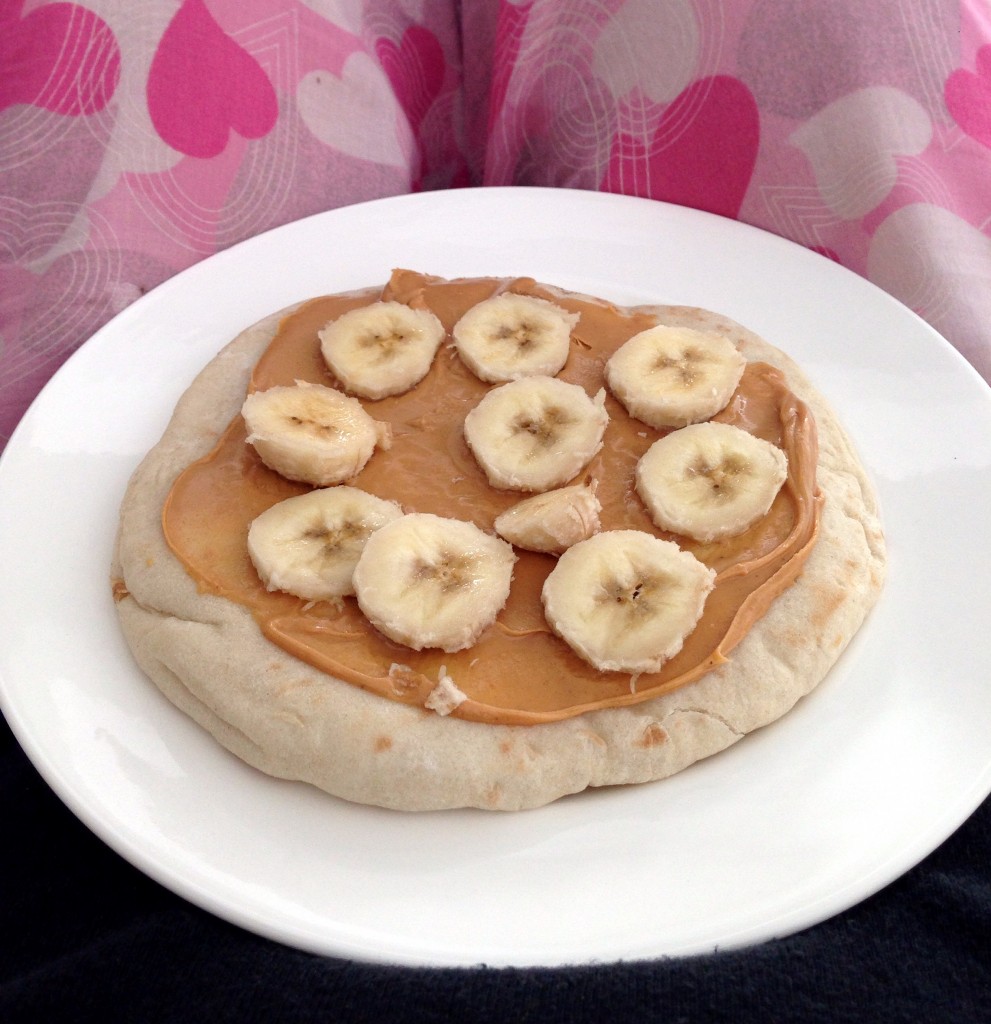 Another day Kevin ended up walking up to the health food store on his own and brought back tofu, vegan  wheat gluten and vegan ham slices. We fried up the wheat gluten in a pan with some onions. It was, okay. A little bit rubbery. I had the same feeling about the ham. It really wanted to be slapped between two slices of white bread with some yellow mustard. 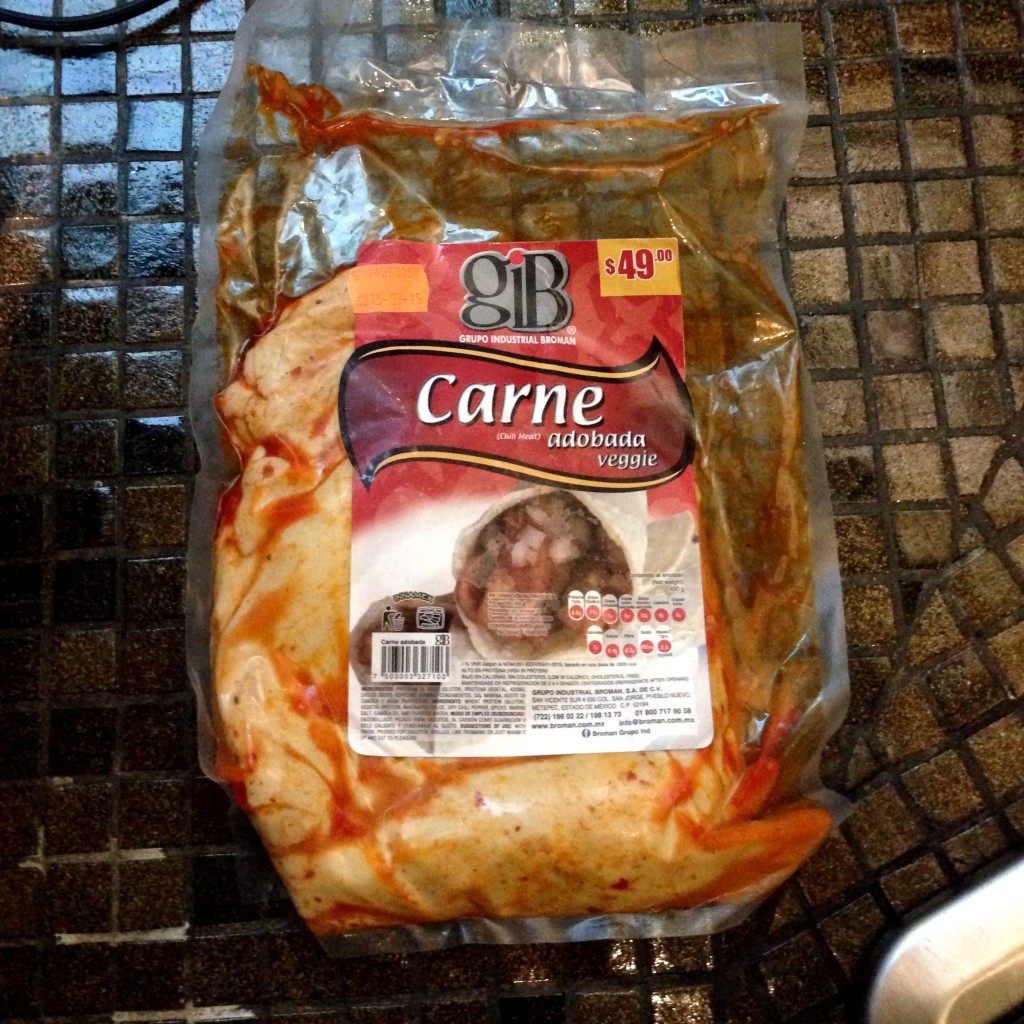 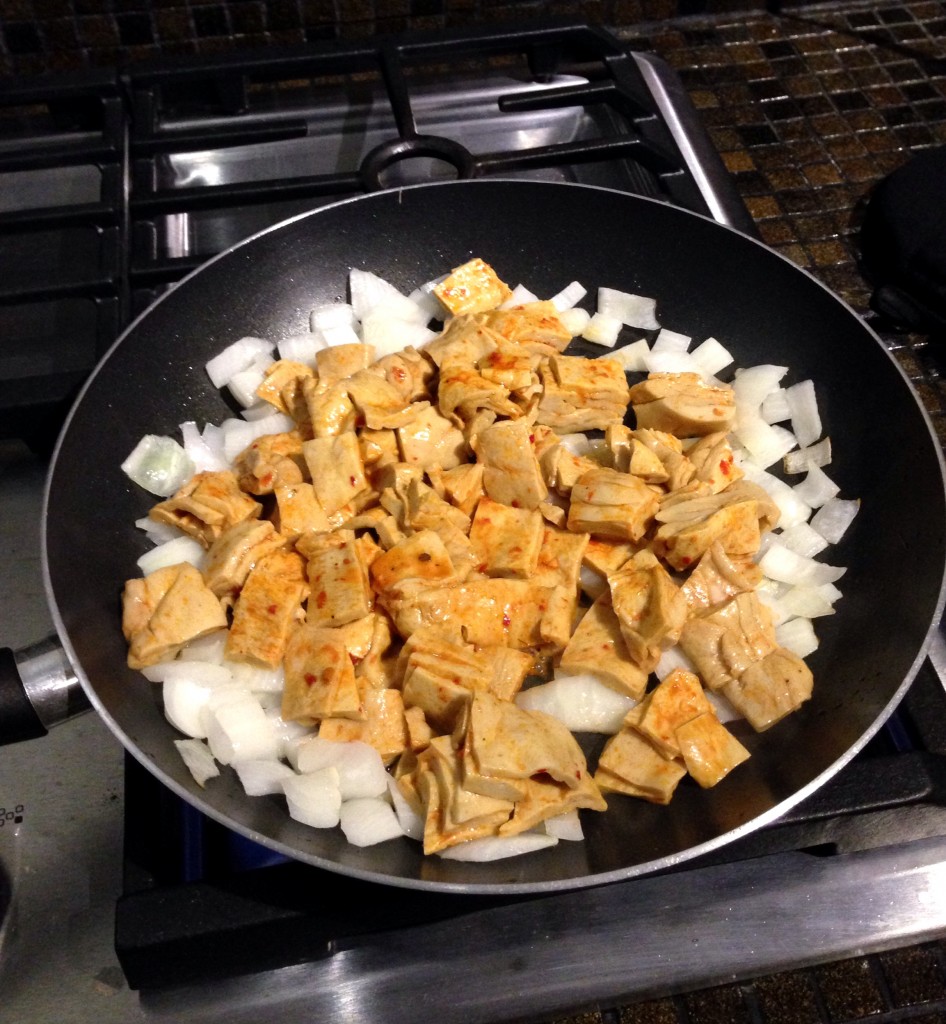 The tofu was made a little differently than what we’re used to here. They used citric acid as the congealer, so it had a slight tartness to it. Which was fine, but it’s not the 100% blank canvas of the tofu we’re used to. The texture is also different. More crumbly. It made a fine tofu scramble though. And I’d packed nutritional yeast and black salt, because, vegan. 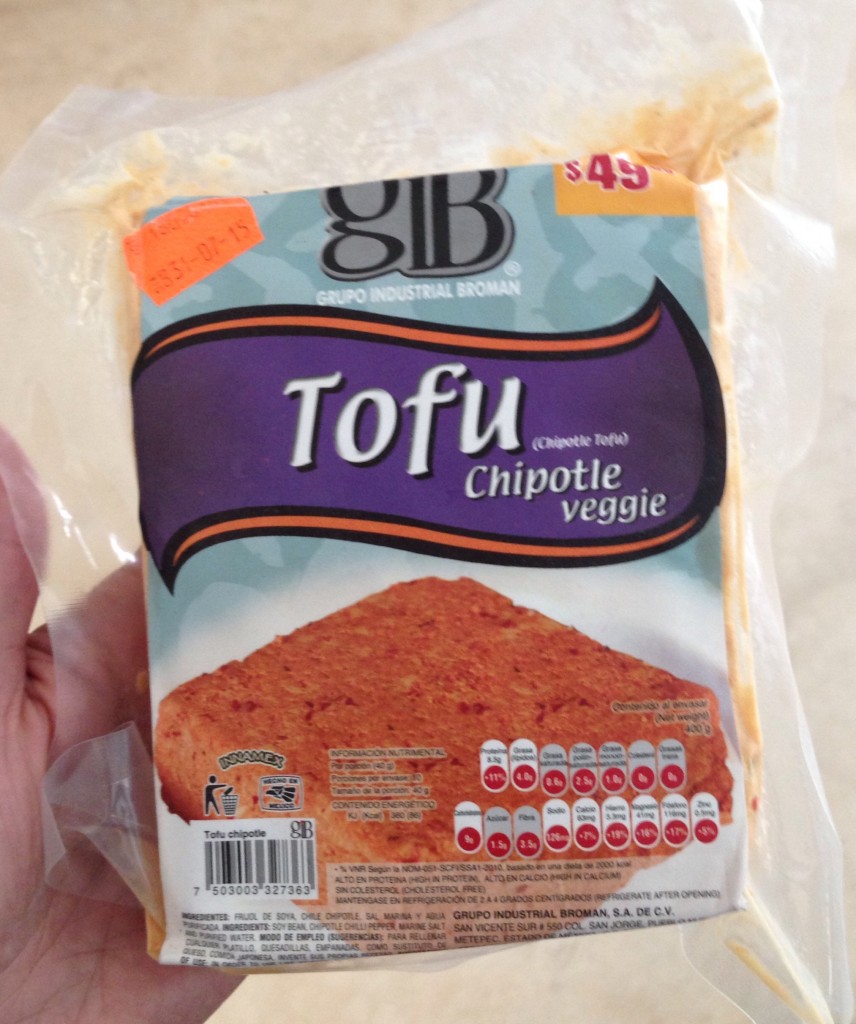 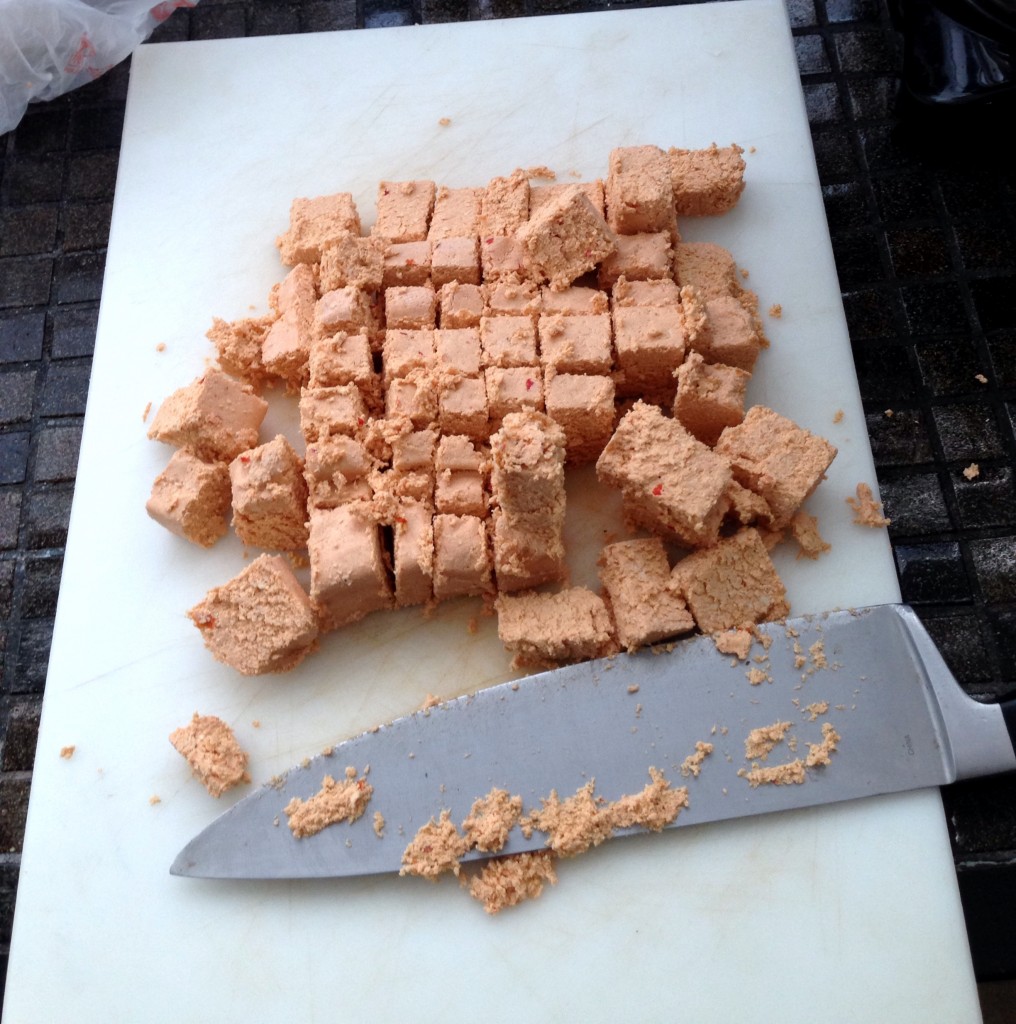 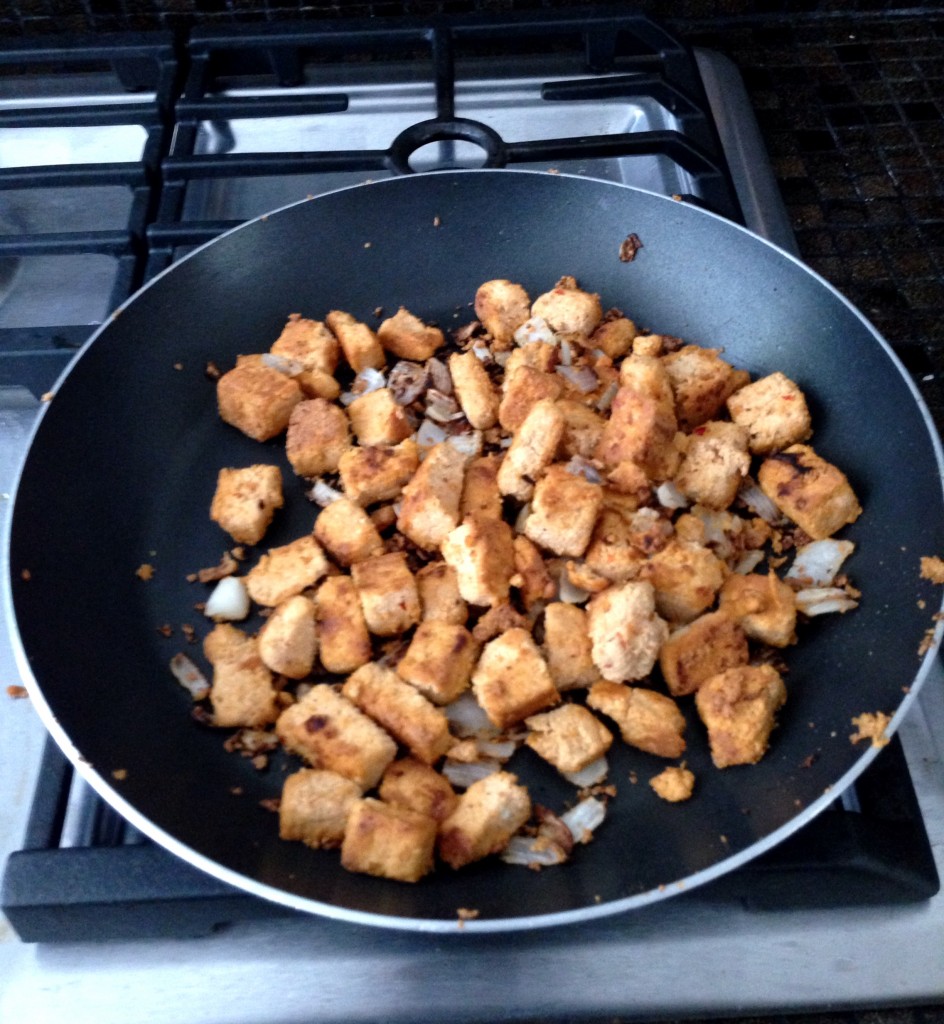 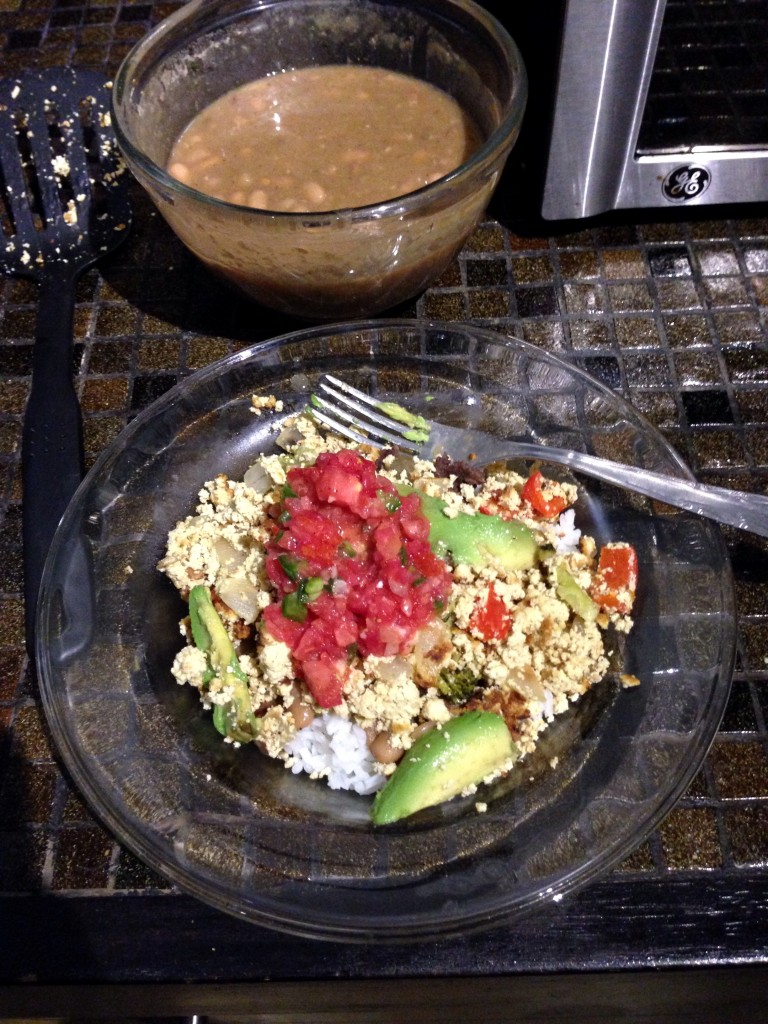 Another convenience food that came in handy was aseptic containers of molé sauce. You can actually find them here at grocery stores with a large Latin American section. So one of our meals was mashed potato enchiladas with molé sauce. 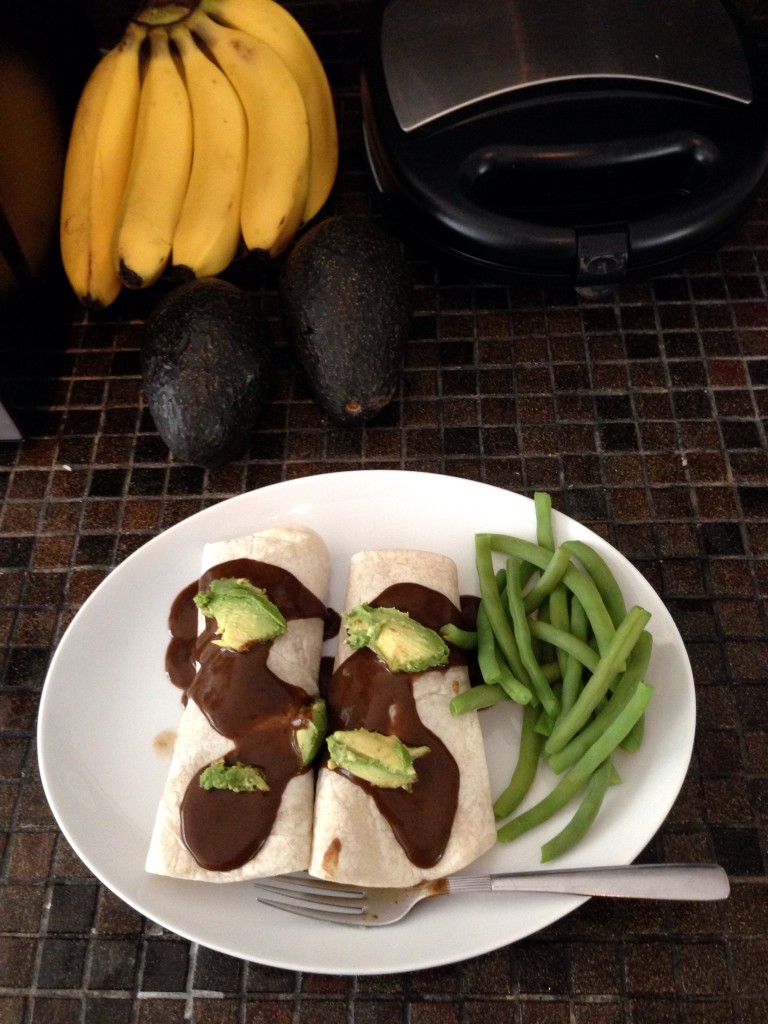 And then, here are more food pics. We pretty much at the same things just in different configurations. 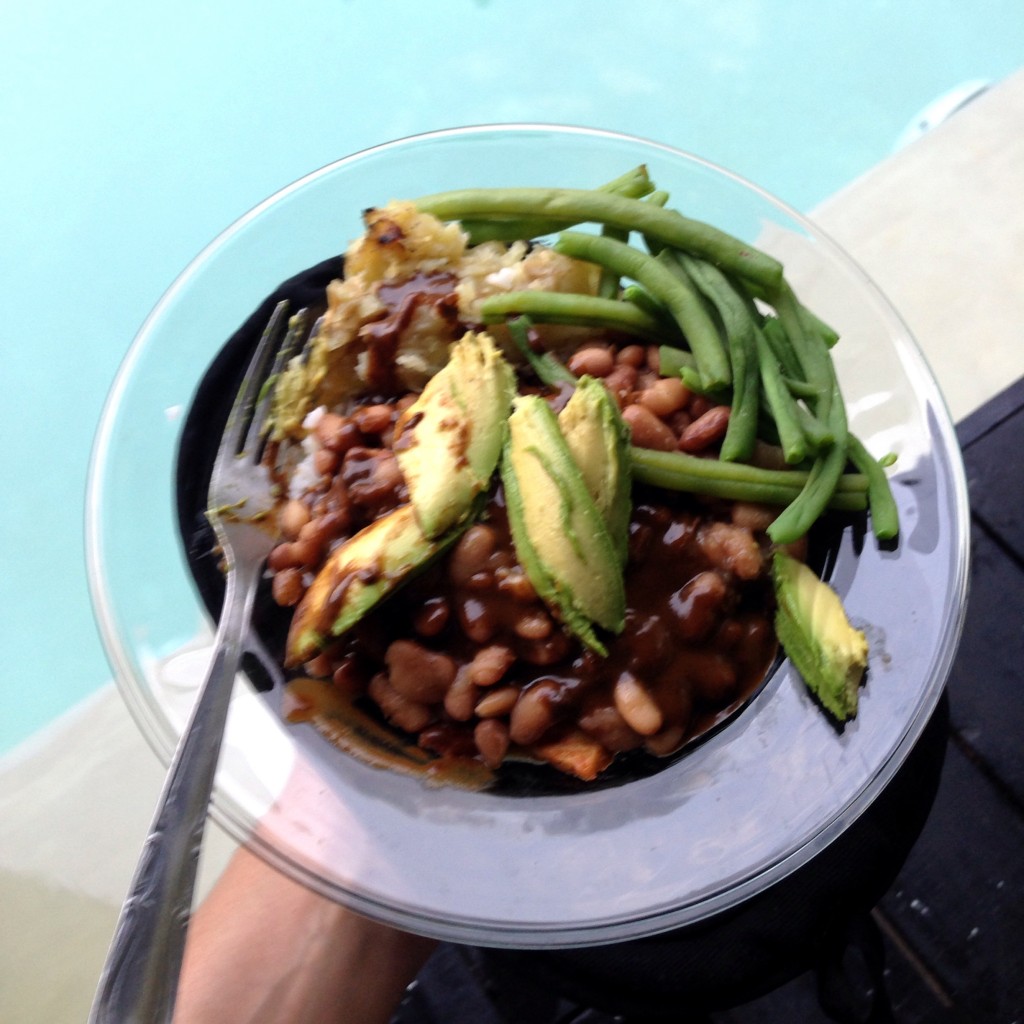 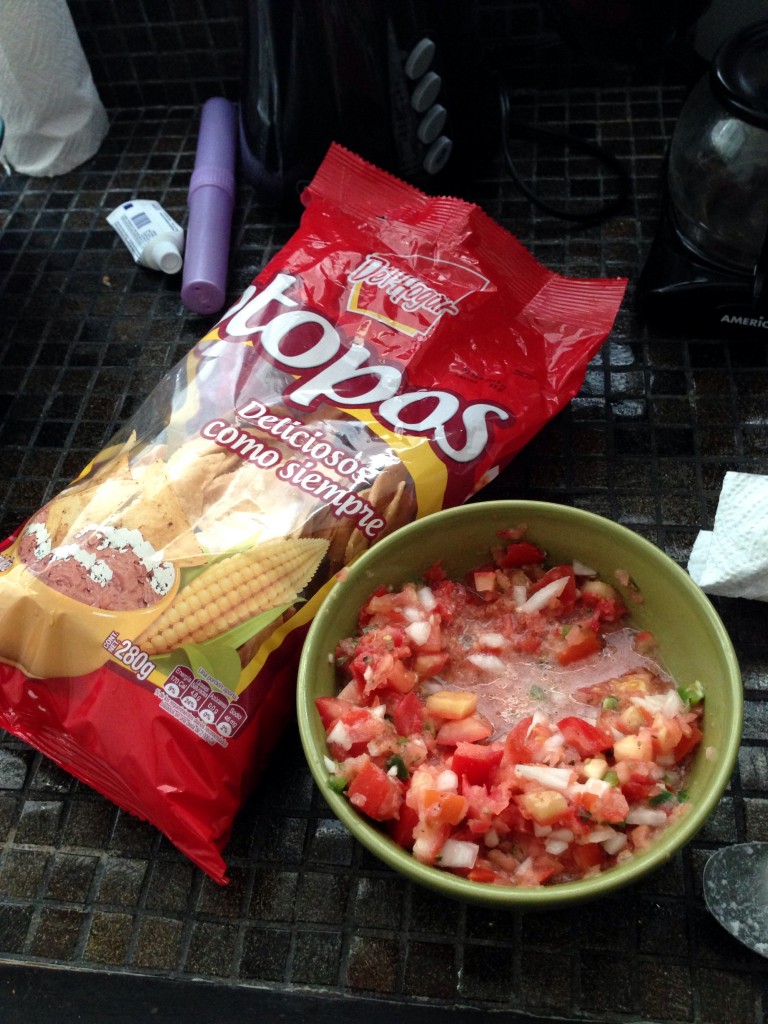 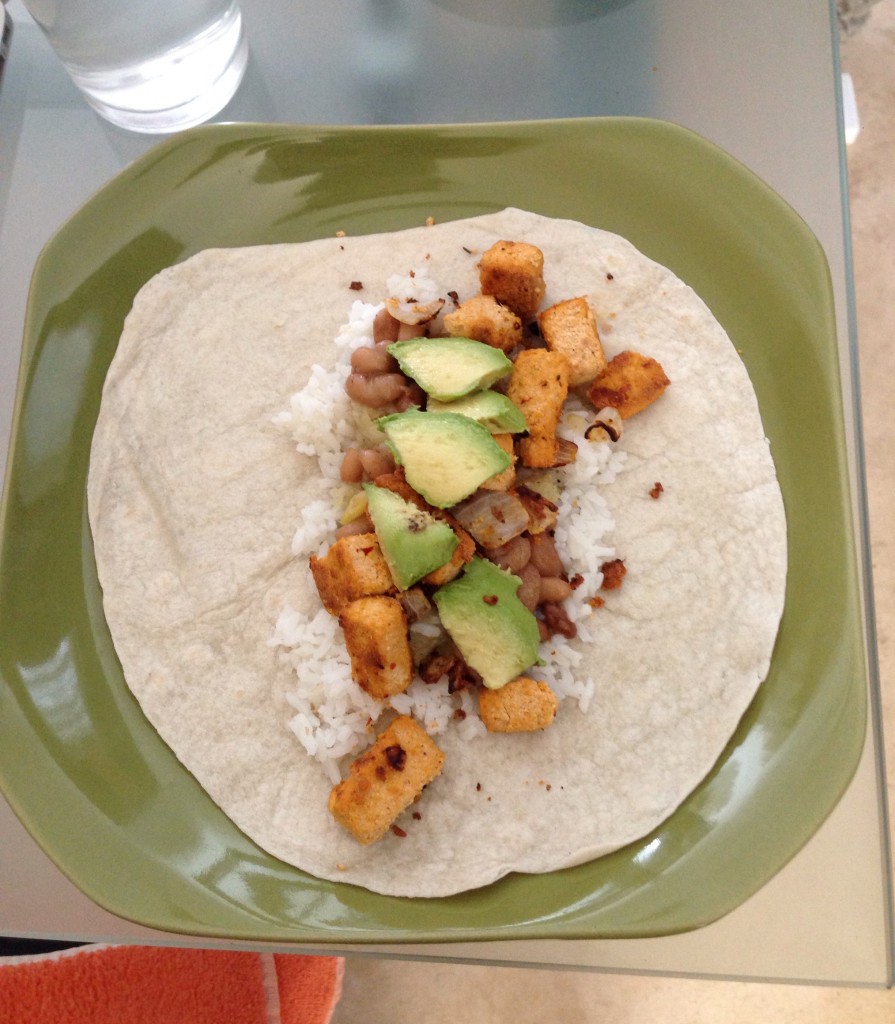 One day the woman minding the property brought a coconut into the backyard. She busted it open and we drank the fresh coconut water. Then she and Kevin peeled out the meat and she gave it to us. I ate that fresh coconut meat like it was candy. So good! 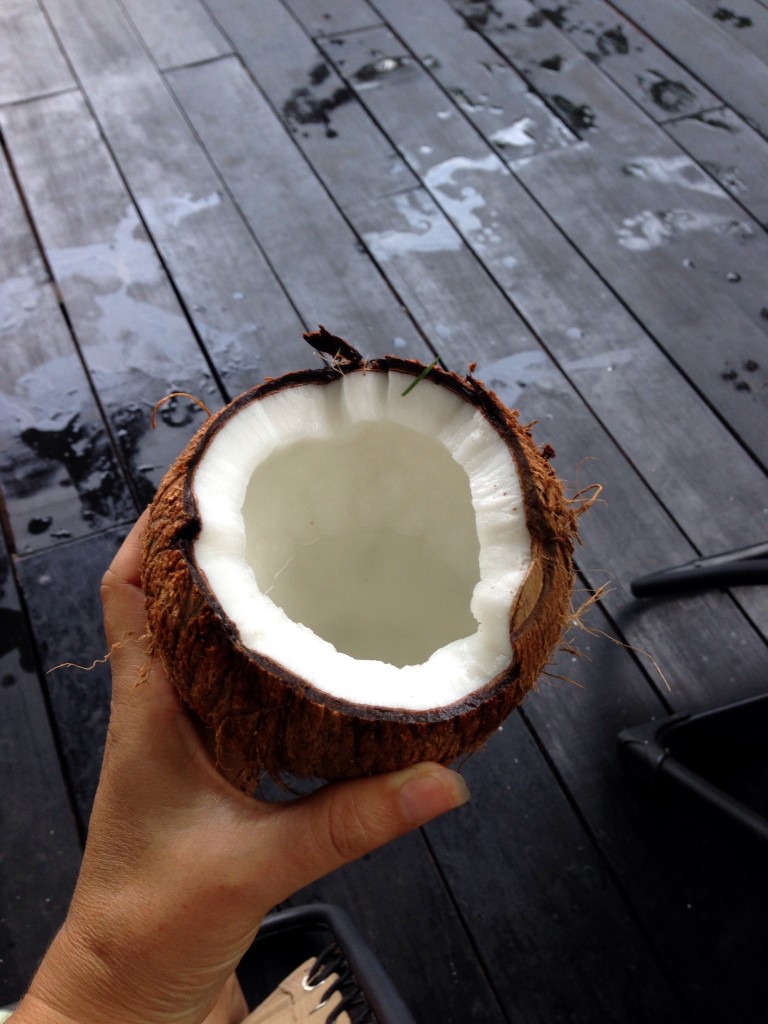 Our place backed up to the jungle which ran along a golf course. So we got to see an assortment of animals. And I didn’t get good pictures of any of them.

The coati are reddish animals with pointy faces and masks. They also have a ringed tail. They’re basically raccoons, but not as destructive, at least here.  They would dig in the jungle floor for tasty treats. One time they had three baby ones with them. So cute!

Another animal that we saw last year too is the agouti. Last year someone in our group nicknamed them “scrabbits” because they look like a cross between a squirrel and a rabbit. But more the size of a big rabbit. There was a shy one that would come through the back yard from time to time.

A few times we saw some red deer. We saw both a male and a female at separate times. And apparently there’s a baby too, but we didn’t see it.

There were several different kinds of lizards. Iguanas, a bearded dragon looking thing and then some little geckos. The geckos were inside the house. And they make this noise that sounds like someone rapping on glass with a ring, which was terrifying the first night. There were 2 or 3 in the house the entire time we were there. This little guy lost his tail somewhere. 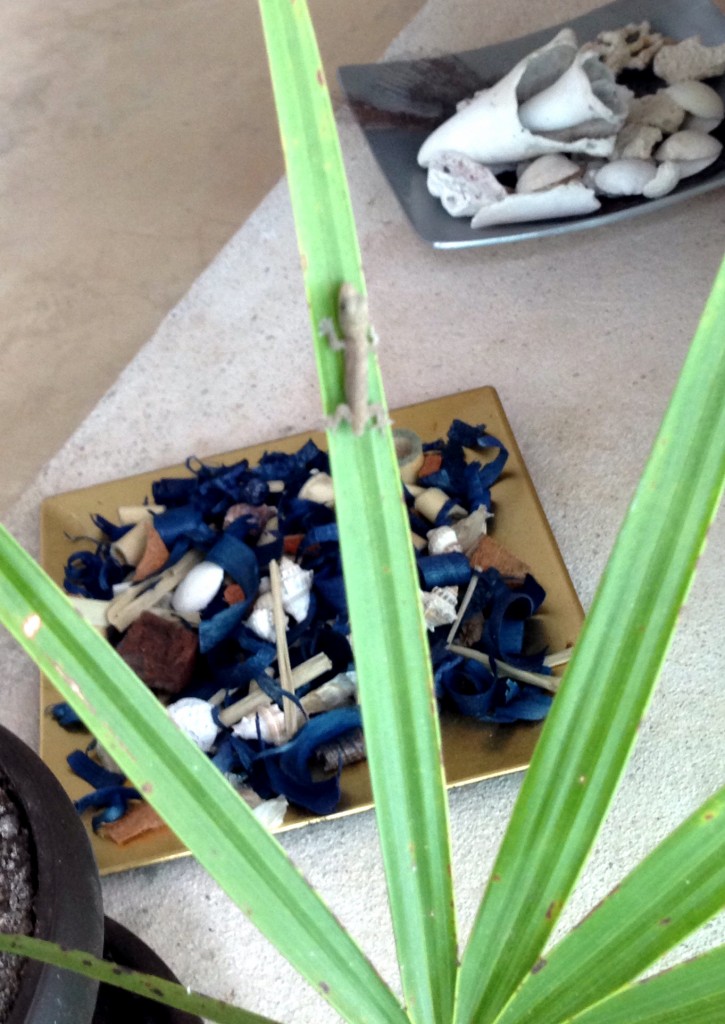 Oh, one night we were watching tv with the sliding glass door open and a fruit bat joined us. Luckily he decided to go back out without too much coaxing. I do wish I had video of him flying around the house.

And one day there was a turtle in the yard. It just looked like a slider, so it probably used to be someone’s pet.

There were a few pretty birds and then some plain chacalacas that I took to calling jungle chickens. And here is their blurry picture. 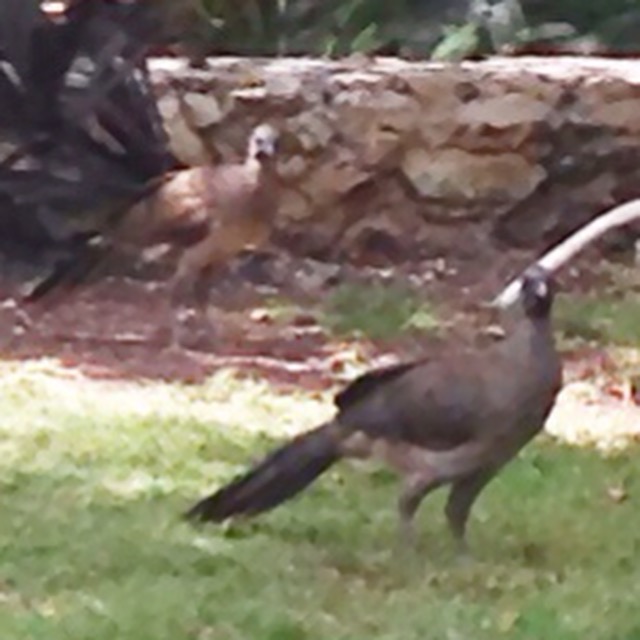 So that’s about it from the condo. Staying in Playacar is really quiet and relaxing. Definitely a different experience than staying in town off the main drag. As you can see, getting vegan food to cook was not a problem. The final post about this trip will be about eating out and our flash flood experience. Hopefully I’ll manage to get it posted before we visit Mexico again.

This Doña Maria ready-to-use mole sauce was a favorite to keep on hand for quick meals. It disappeared for a while but it finally showed up again at Buford Highway Farmer’s Market. . (Update below post) Last time I posted about it, we ate it in the form of an enchilada stack. This time, I rolled up Trader Joe’s fake chicken strips fried up with onions and garlic and Daiya in flour tortillas, stuck them in a square pan, dumped the mole sauce all over then sprinkled with Daiya. Baked it for around 25 minutes at 350F and it was food. To keep all the food mud colored, we had it with a side of refried black beans, from a can all lazy like. 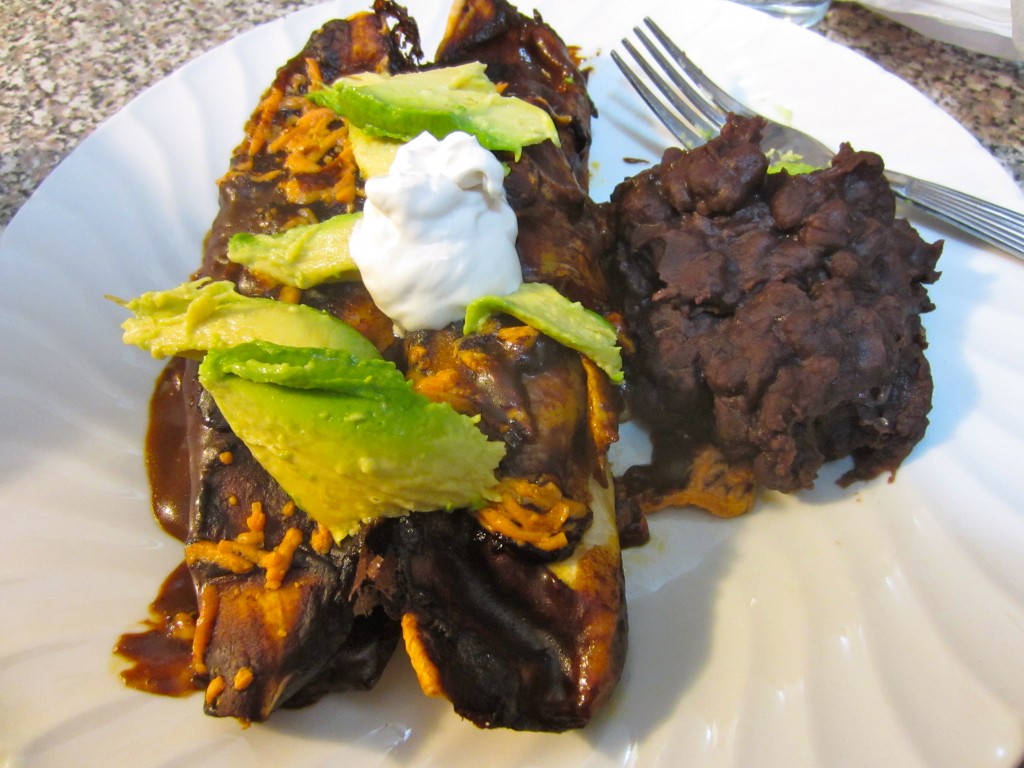 UPDATE: So after I posted this, I went ahead and wrote the company asking about the “natural ingredients” to make sure they were vegan. And they are! Here’s the response: 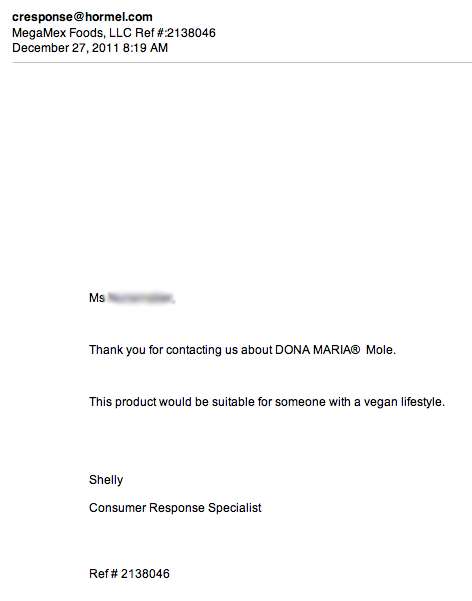 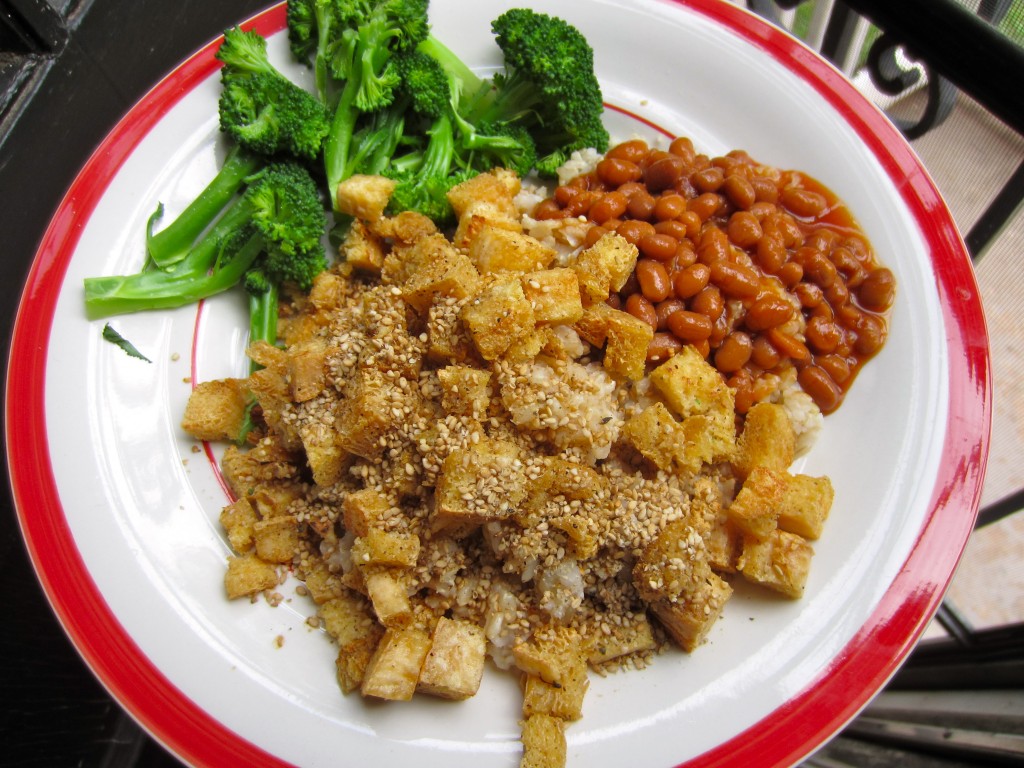 I’ve been craving this kind of food lately. Simple, healthy. Steamed broccoli, baked beans, brown rice and tofu sprinkled with gomashio and Bragg’s. It would’ve been a greener plate but lunch was a giant bowl of kale salad. The tofu was just sautéed in a pan, beans and broccoli cooked in the microwave and rice in the rice cooker. A healthy tasty meal doesn’t have to involve a ton of work or destroying your kitchen. It can be this simple.

Doesn’t a Mexican restaurant with a number of choices for vegans sound great? Of course it does! A week or so ago Matt and I checked out Across the Street over on Highland by Cosmo’s. 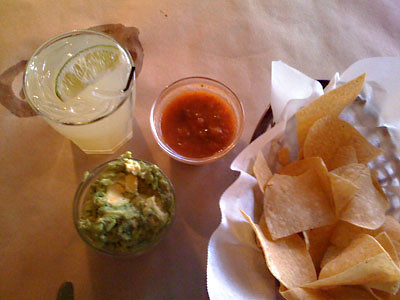 Inside it’s cosy and vibrant. We were there pretty early, so I don’t know how loud it gets in there. It wasn’t an issue at all for us. Warm crispy chips & a nice red salsa arrived. We went ahead and got some guacamole as well. And margaritas. All of the above were excellent.  Matt ordered carnitas (he’s not veg, der) and I got the tacos with one tvp and one tofu. He didn’t like his carnitas. Thought it was too tough and dry. My tacos were pretty good. The tvp was clearly made by a non-veg person. It tasted like they reconstituted the tvp in plain water then just kind of cooked it with some taco seasoning. So, they need to figure out that tvp needs to be soaked in something flavorful before cooking. The tofu was great though. If I remember right it had a light dusting of seasoned cornmeal and was fried. Pan-fried, I think. The rice seemed slightly mushy, but tasted good. The beans seemed slightly bland at first but I found that I appreciated them more as I ate them, so I think they were fine. There are more vegan options on the menu, so I’m all for going back and checking out something else. 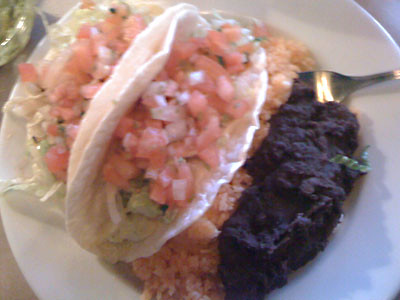