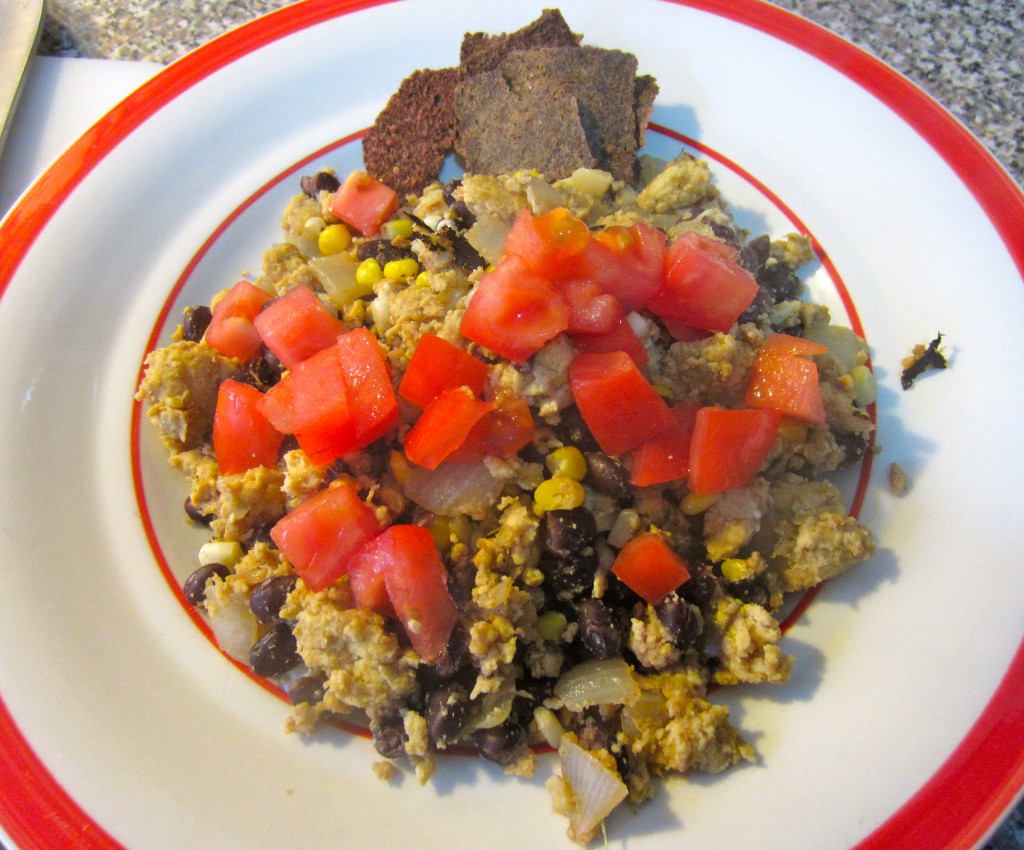 When you only do your grocery shopping once a week, you need a few late in the week recipes. The Tofu Chilaquiles from The Happy Herbivore works well for that. I’ve had a few versions of chilaquiles and I think I like the kind you cook up with corn tortillas better. A bit of Daiya might have found its way into these, but not a ton. Just a little sprinkle on top. All I had was some raw beet chips, so those served as the corn chips. The leftovers were really good spooned inside of steamed corn tortillas and eaten taco style.

Not every meal is planned. Sometimes you look around your kitchen and see what you can do with what you’ve got. This was one of those meals. Pasta, black beans, Daiya, tomatoes, tomato paste, bell pepper, onion, a jalapeño … sounds like a chili mac! And indeed it was. 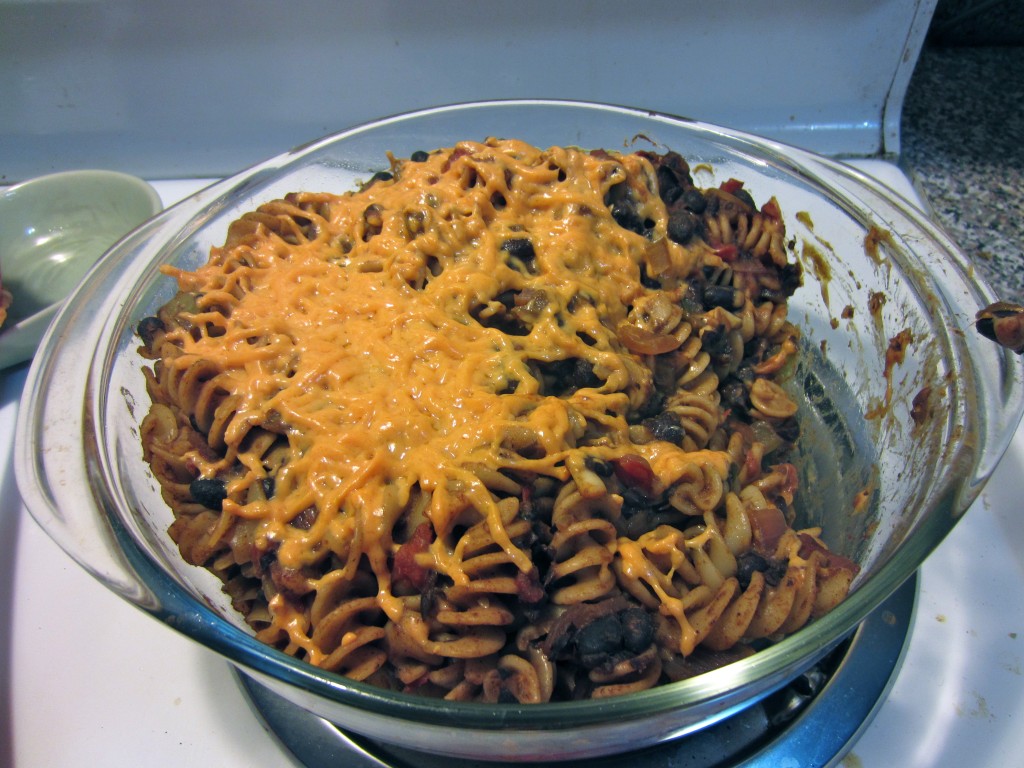 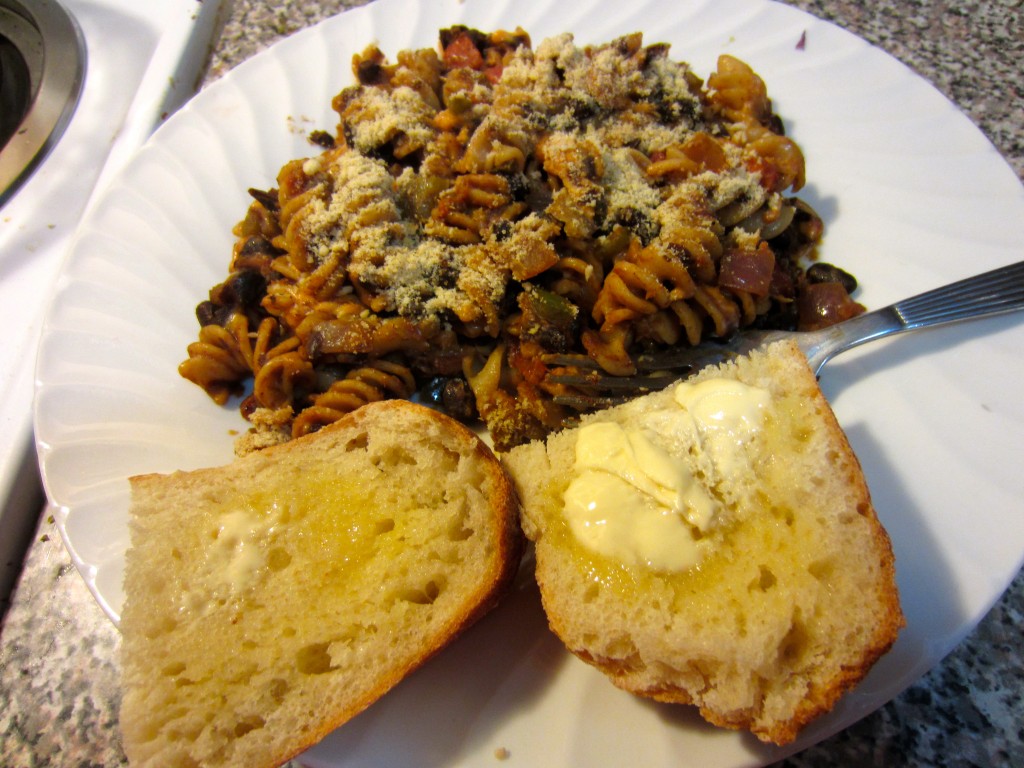 If you find yourself afraid to stray from recipes, just keep cooking things. Once you’ve cooked enough things you will eventually be able to collect ingredients and make a meal out of them without outside help.

Here’s how easy it is. I decided I was going to make the Spicy Black Bean Chili from Fresh From the Vegetarian Slow Cooker by Robin Robertson. So one evening I put the beans on to soak. Next morning, I tossed them in the slow cooker, covered them with water, added a piece of kombu (I always do this with beans. It’s supposed to make them, uh, more butt friendly.) While I was at work, they cooked up perfectly. That evening, I did the minimal prep work, filled the cooker crock with the ingredients, and tossed it in the fridge overnight. Next morning, it came out of the fridge, cooked on low all day, and then became dinner that night. Helpful hint: putting it in the fridge is a good way to buy you another hour or so if you’re going to be gone longer than the maximum cook time.

I like this recipe but it is fairly mildly flavored. I usually just start tossing some extra stuff in there. It’s different every time. This time I think I just used cumin and cayenne. Sometimes I use chipotle powder or even a bit of chipotle in adobo.  What makes this even better is melting some Daiya vegan cheese on top and sprinkling on chunks of avocado. 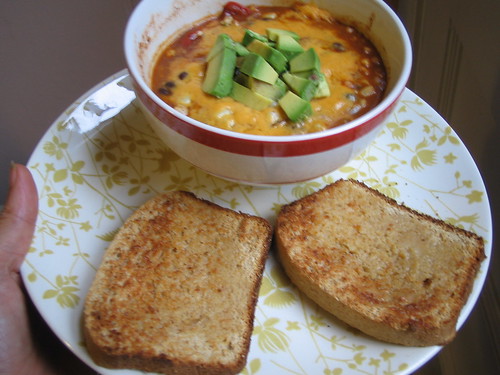 Now, if you want to get really crazy, you can make the polenta fries from Eat, Drink & Be Vegan by Dreena Burton. Thanks to the 50% polenta tubes we found a few weeks back. Instead of cutting them in planks as the recipe calls for, I cut them in cubes. Also, instead of rosemary I seasoned them with a little chili powder. Oh, and I don’t bother peeling the polenta tube. That seems…unnecessary. If you’re wondering what I’m talking about, you’ll know if you see the recipe. Now that I’ve actually made polenta, I need to just make and use my own. Okay, so it isn’t corn bread, but it’s similar, right? This had to work…and it did! Tell me you don’t want to eat this: 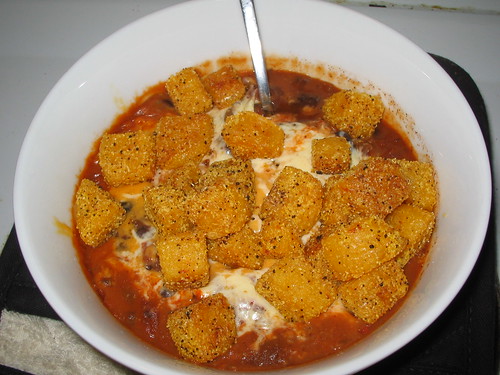 I had the ingredients for Jackfruit “Carnitas” around since I didn’t get to use them for the failed potluck. So we had them for dinner, in flour tortillas this time instead of corn. I don’t think Kevin was too enthusiastic about them. I still dig them though and have been chewing on the leftovers for many meals. We ate the original meal with the Black Beans and Rice from the Miami Nights episode of Simply Delicioso. Definitely, simple, easy and yummy. Sometime soon I’m going to try one of her yucca recipes. 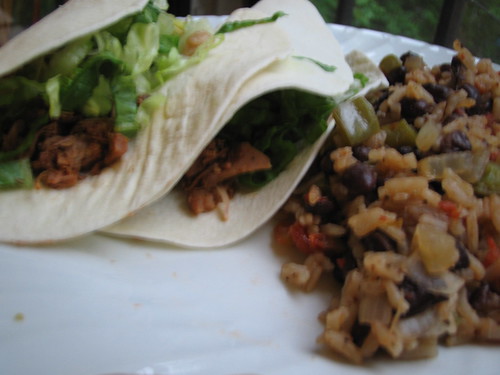 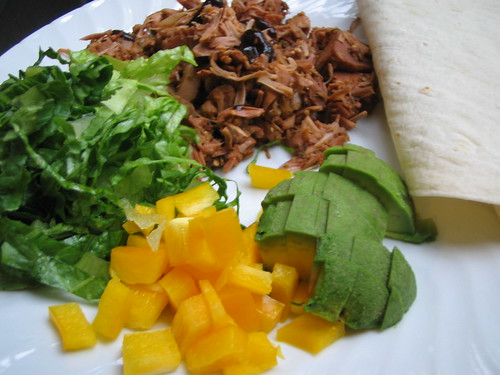