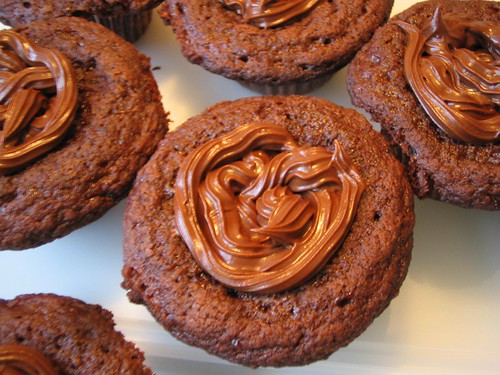 Holy crap! I think I went into an instant sugar coma after biting into these. Mine ended up muffining out out over the top and sinking in the middle. But the eat up just fine. And the little dent was the perfect place to stick the frosting. The black cherry preserves and small bit of whiskey add a lot of dimension to the flavor of the cupcakes also. Crazy good. Oh yeah, they’re the Brooklyn Brownie Cupcakes from Vegan Cupcakes Take Over the World.

So today was the bake-off at Cosmo’s Vegan Shoppe. I’m not one to develop my own recipes, but for the fun of it thought I’d go ahead and enter something. Since my last doughnut experience was good, I thought I’d work out the mini doughnut pan and try to see if I could come up with chocolate doughnuts. But I’m always looking for an excuse to mix chilies and chocolate, so I thought Mexican Chocolate Doughnuts!

My mini doughnut pan came with a chocolate doughnut recipe so I started with that, subbed the animal bits and tossed in some cinnamon. For the ganache, I used the recipe in Vegan Cupcakes Take Over the World and tossed in some chili powder. I felt like the doughnuts were a little bit denser, heavier than I would like. I think next time I try them I will half the egg replacer and try something else like maybe souring the soy milk with vinegar. But no matter what I thought, the little guys won Most Creative Recipe! Yay! I got a medal and an apron and a cook book as prizes. Yipee! I was really surprised, but after I tasted the other entries I was even more surprised. There were no “losers” there. Everything was super nummy. Hooray for vegans!

Lightly spray mini doughnut pan with cooking spray. Combine flour, cocoa, baking powder, salt and cinnamon. In another bowl, mix egg replacer mixture, sugar, vanilla, soy milk and Earth Balance until well mixed. Add flour mixture to wet mixture a little at a time until mixed. Fill each doughnut mold about 2/3 full. You may need to spread with your finger to even out. Bake for 8 minutes. If you’re using a full sized doughnut pan you will need to bake longer. Cool slightly. Remove carefully and continue cooling on a rack.

When doughnuts are cool, make Chili Chocolate Ganache. Bring soy milk to a boil in a small pan. Remove from heat and add chili powder, chocolate and maple syrup. Mix with a spatula until melted and smooth. Drizzle over tops of doughnuts with a spoon.

Today I’d like to give thanks for the fact that there is such a thing as a mini doughnut pan. And that someone has worked out a vegan doughnut recipe. And that I wasn’t too hungover this morning to put the two items together.

Here they are all nekkid straight out of the oven. I had pretty good luck getting just the right amount of batter in the pan. Only a couple started to muffin top on me. I doubled the recipe and ended up with 36 doughnuts. I only have the one pan and had to bake in 3 batches. The last batch was definitely more spongy and air-filled than the first. Keep in mind if the holiness bothers you.

For these I used the glaze in the link above.

And for these, I used the chocolate ganache recipe in Vegan Cupcakes Take Over The World.