Wait, didn’t I just blog a Thanksgiving feast? No, that was a Thanksgiving-themed feast. This here one was on actual Thanksgiving day! Totally different. This was a pretty small gathering of 3 couples, but we didn’t lack anything.

For my contribution, I baked because it’s what I do. I figured everyone would like ciabatta rolls, so I made some of those. There was also a maple walnut oat loaf made with white whole wheat. Kind of healthy but didn’t taste like it. 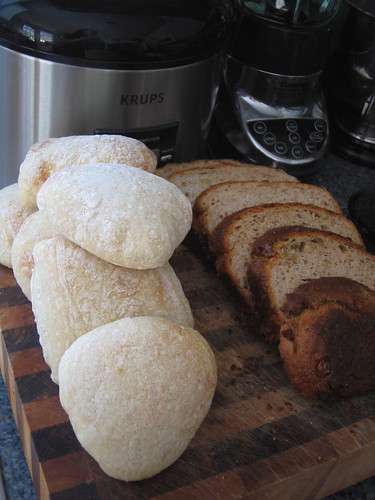 Somehow I didn’t get any pictures of the snickerdoodles I made. They were definitely a hit though. Who knew such a simple cookie could be so popular? The main dessert was this pumpkin cinnamon swirl cheesecake. Tasty, but I think I would have liked it a little denser. Others liked the fact that it was a little softer. It was perfectly set up though and cut and stayed together nicely. I forgot to swirl it though so it kind of looks like rock strata. 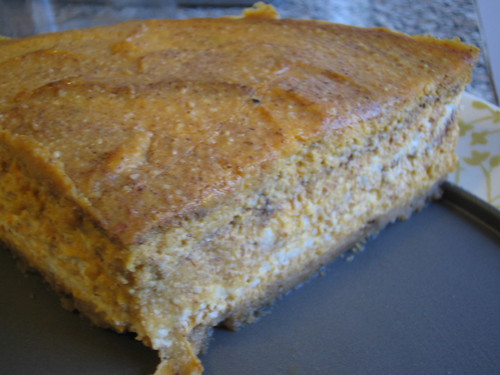 Here’s my plate of belt-loosening goodness, clockwise starting at 12: sweet potatoes with Dandies marshmallows, mac & cheese,  Stuffed Hazelnut Cranberry Roast En Croute By Field Roast, dressing and mashed potatoes under the gravy, Match Vegan Meats holiday roast (this time the pre-made version), the maple walnut oat bread and green bean casserole in the center. There were also two cranberry sauces: the regular jelled canned kind and a home made cranberry pineapple sauce. I had to clear some space before I could get them on my plate though. 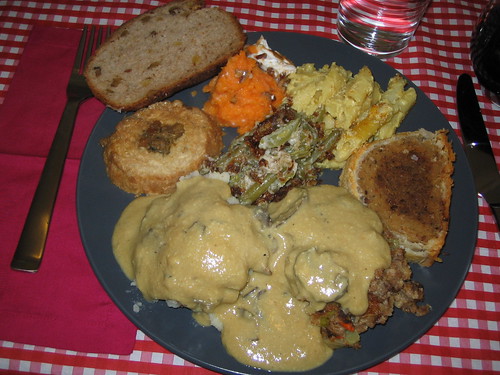 Both the roasts were great but different. A more traditional person might like the Match roast better. I really enjoyed the cranberries, apples and crystallized ginger in the Field Roast. But I know ginger is a strong flavor and can turn some people off.

I’ve been cruising the vegan blogs today checking out everyone’s holiday meals in between working and mopping up drool. As with vegan cheeses, how much does it rock that we have an actual assortment of holiday roasts to choose from now?