To celebrate, I’m going to share another recipe from Dough, vegan Pumpkin Walnut Muffins. This was one of our most popular muffins at the bakery and while we made it year round, it’s particularly suited to this season.  And bonus, these muffins don’t require any weird ingredients. It’s all stuff you can get at any grocery store.

2. Whisk together the dry ingredients, flour, sugar, baking powder, salt, and spices in a mixing bowl. In a another bowl, whisk together pumpkin, milk, oil, and molasses. Pour the wet ingredients into the dry and stir until just mixed. Stir in chopped walnuts.

3. Fill the muffin cups about 3/4 with batter or if you have one with #12 scoop. Put a walnut half on the top of each muffin. Bake for 20 minutes, until a toothpick inserted in the center comes out clean.

When I saw that Califia Farms had a vegan Pumpkin Spice Latte almond milk coffee blend I got pretty excited. Sure, there are plenty of recipes online for making one at home. But a jug of it already made is, well, already made. Then you don’t have to think about partial cans of pumpkin, etc.

Soon enough, it was spotted in Atlanta and Kevin picked me up a jug because he’s cool like that. So I broke into it pretty quickly. It’s pumpkiny, spicy and not too sweet unlike most of the other holiday drinks out there. But where’s the coffee? I can’t taste it at all. I had a glass before dinner a few times and never felt the caffeine either. 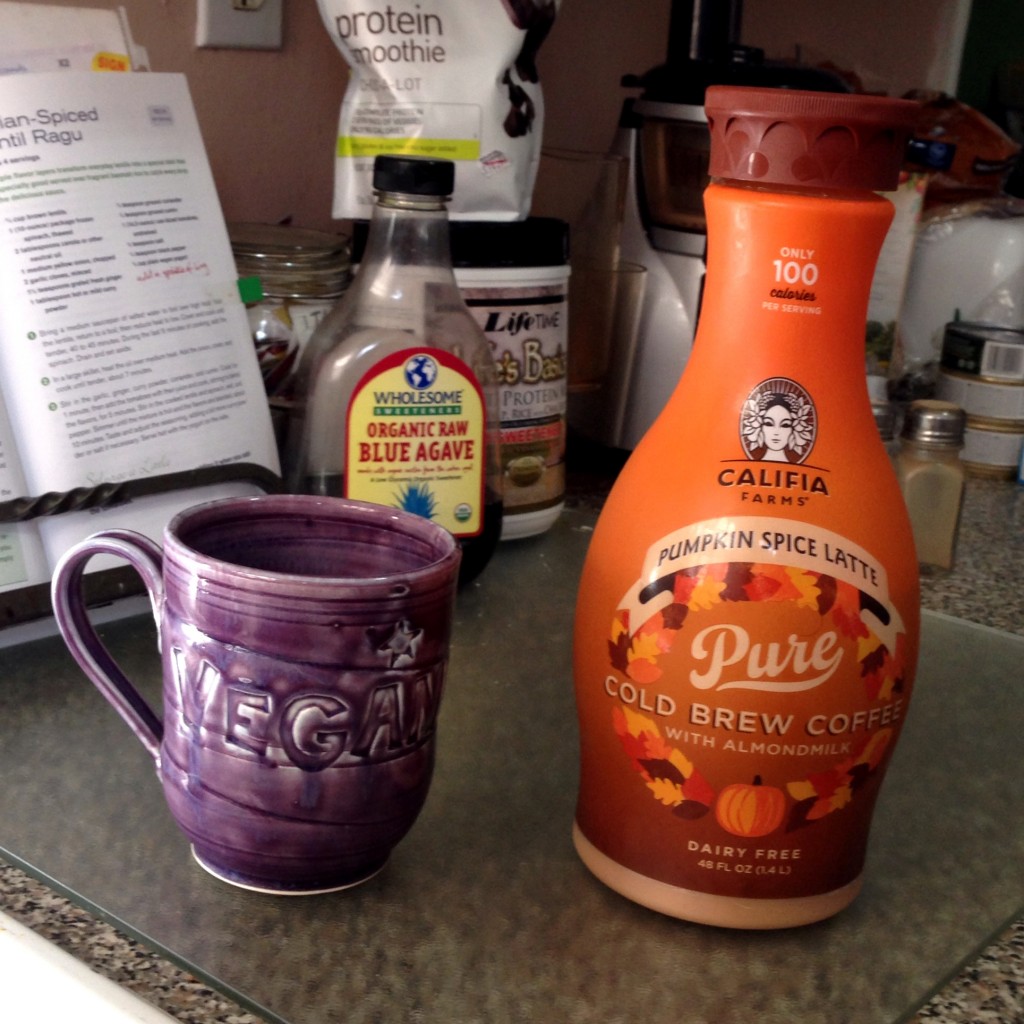 Not enough coffee, hmm? The next thing I tried to do was pour it into my coffee like a creamer. That wasn’t good. I’ve used their regular almond milks as creamer just fine, but this wasn’t fatty or creamy enough. 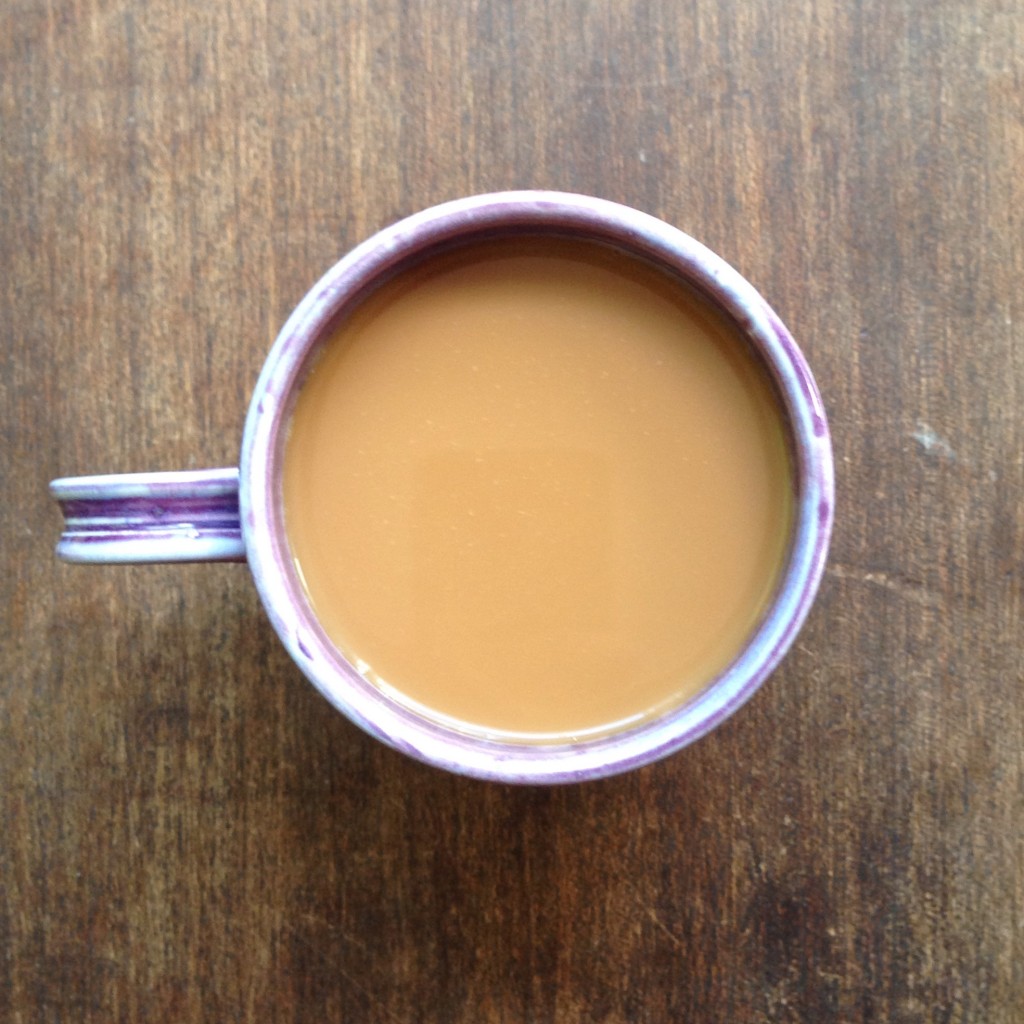 So I finished off the rest just as a drink, usually before bed as an after dinner snack. Sadly, I didn’t like it enough to get any more. Oh well, next new vegan product, please!

P.S. Why yes, that is a Jeannette Zeis vegan mug that I’ve had forever. I think it was a second but around here it’s my first. 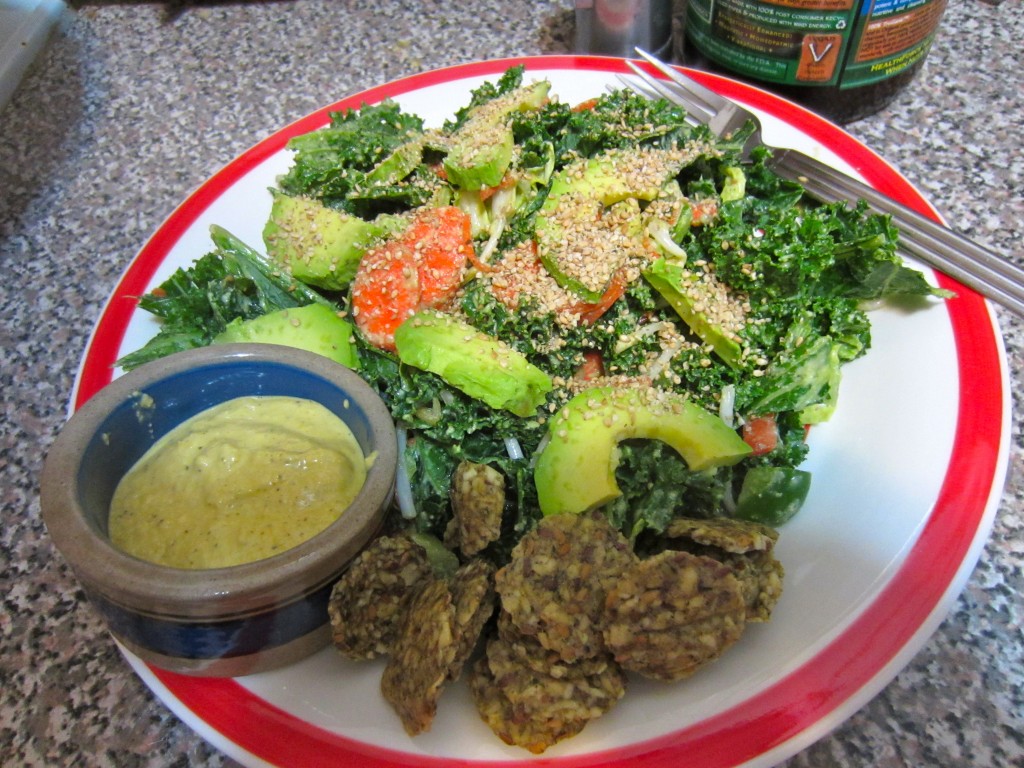 Oh, hey, look it’s that garlicky kale salad that I make all the time. This time it’s the center of the meal with added veggies and some avocado to make it more filling.

The little bowl contains Yellow Bell Pepper Pine Cheese from Thrive Foods. We scooped it up with raw pumpkin chips. Crazy good! And this turned out to be plenty of food.

When I saw this recipe while cruising VeganMoFo blogs, I knew I’d be making it soon. I mean, I had JUST cooked up a big batch of chickpeas. How could I not? Plus I’m apparently obsessed with pumpkin right now. I even bought one at the farmer’s market this weekend to bake up for myself. But for the hummus, I used the lazy canned kind. But I made up for that laziness by making my own pita.

For the pita, I used the recipe in The Bread Bible. It’s pretty simple and the dough can rest in the fridge for up to three days. So it’s easy to make them on your timetable rather than letting the yeast rule you.

Oh yeah, I almost forgot the really fun part about the pita. I mixed up the dough Sunday evening. I was a little tired. When I was getting the water, I just filled a measuring cup with water, then checked the temperature to make sure it was okay. The next step would have been to poor off the excess and pour the amount the recipe called for into the bowl. But I just dumped the whole thing into the bowl. Crap! So I added a little more yeast and flour until it felt right. Apparently I am learning what “feels right” means because they came out just fine. All but one even puffed like it should. And that one half puffed.

So, what about that hummus & chard? I gave you the link to the pumpkin hummus at the beginning. I don’t know if my garlic was super strong, but if you’re garlic shy, you should start with half the amount and see how you like it. I liked it just fine! It’s also a wee bit spicy. It mixes up really nice and smooth in the food processor. Sometimes hummus recipes don’t behave as well. The chard is Tunisian Braised Chard from Olive Trees and Honey. Flavorful and juicy. The pot liquor was so good that I’ve been drinking it after I finish the veggies.

This post brought to you by: Kevin’s old powerbook! Which is really cute and small and sort of makes me wish the new MacBooks had a little bitty version. Bad news: someone broke into my house and took my shit. Good news: I’ll get a new computer a little sooner than I was planning. Bad news: probably not replacing camera.

Oh, and it might be too late, but I’m going to send this to Susan at Wild Yeast Blog for YeastSpotting. Even if it doesn’t make it, you should check out the YeastSpotting round-up every Friday. You’ll drool over all the bread yummies people have been making.

A couple of weeks ago we had a big ‘ol vegan Thanksgiving to send off a friend to Ghana since she was going to miss it. We had all the appropriate goodies like Tofurky, stuffing, mashed potatoes, gravy, etc. It was a huge carbfest! The best part is that we get to do it all again when real Thanksgiving rolls around. Woo hoo! I brought an apple pie and this Pumpkin Bundt with Maple Glaze. 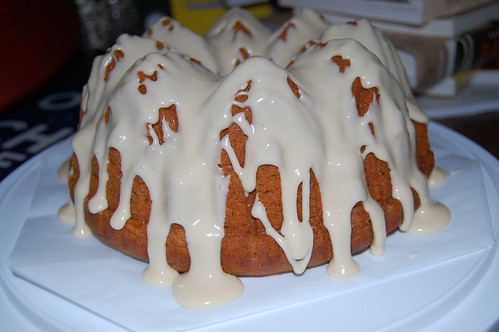 It’s a veganized version of this recipe. I used flax seeds for a couple of the eggs and vegan sour cream for another couple. Then I just added a bit more soy milk to make up for the 1 less egg’s worth of eggy sort of stuff. And subbed maple syrup for the honey in the glaze.

So I’m going to try and participate in VeganMofo this year. That’s a post about vegan food every weekday for the entire month of October. Oy. We’ll see how that goes.