You people might be tired of looking at these, but I’m still amazed every time I open the oven and pull one of these loaves out. I did that? This time I went with the Vermont Sourdough with increased whole grain from Jeffrey Hamelman’s Bread. And again, it’s about perfect. The rye flour in it doesn’t weigh it down at all. It does take some planning to produce a bread like this, but it’s totally worth it. 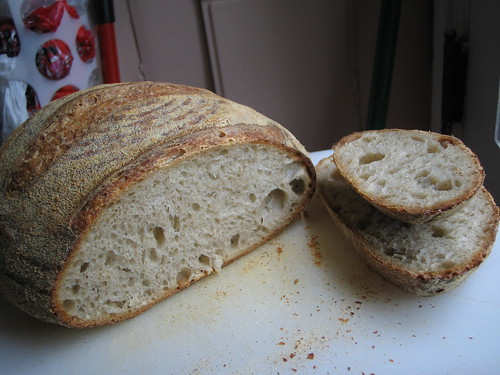 I enjoyed my first slices with a raw kale salad and marinated grilled tempeh. A pretty healthy lunch. 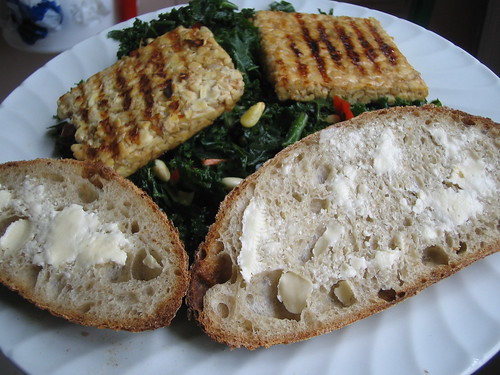 So what happens when you take an active sourdough starter, stick it in the fridge and ignore it for 6 months or more? Apparently nothing bad. This is exactly what I did. Actually, I have 4 starters in the fridge. Last week I decided to try and revive the Italian starter and attempt a batch of bread.

Friday night I began the Vermont Sourdough from Hamelman’s Bread. Saturday morning I worked through the shaping and then retarded the two loaves in the fridge overnight. Then Sunday morning I baked them off one at a time on my pizza stone. The first loaf I steamed once with ice cubes. The 2nd loaf I added a second steaming. The second steaming seemed to give the 2nd loaf a little more spring. The taste was mild but clearly the starter did its job. Nice rise, good crumb. Chewy crust. Sourdough bread is such a process that it’s even more satisfying when it all goes well. 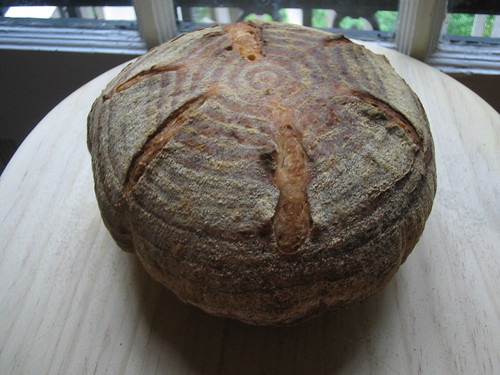 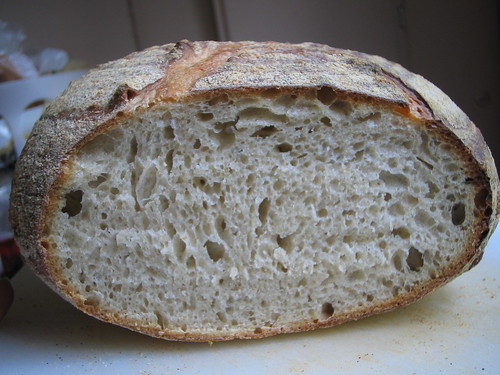 So there have been sammichs, bread slice snacks, bread with salad, etc. And I haven’t cut into the second loaf yet! So what to do with the cast-off starter created when feeding? There are a bunch of things you can do with it, but this time I chose scones. (Obviously, I veganized that recipe.) It really doesn’t act to rise the scones, but flavors them a little and keeps you from having to throw the excess in the garbage.

Most of the cool, vegan-friendly restaurants in Richmond are near VCU. So Monday, Memorial Day, Panda Veg was closed and so was Harrison Street Coffee Shop. I figured since Ellwood Thompson’s is a grocery store, it would be open. And it was. It’s kind of like Whole Foods, but independent and more focused on local items where possible.

They had a hot bar that didn’t look that appetizing. There was also a salad bar that looked okay. So we settled on sandwiches. They had a bunch of options for vegans. You fill out a little laminated card with all the options you want on your sandwich and they make it for you.

Mine was a vegan chicken salad on sourdough. The texture reminded me of Soul Vegetarian’s eggless salad. Kevin said it tasted better than Whole Foods’ fake chicken salad. It was tasty. And the sandwich was huge! Half would have been plenty. But I ate 3/4 of it any way. 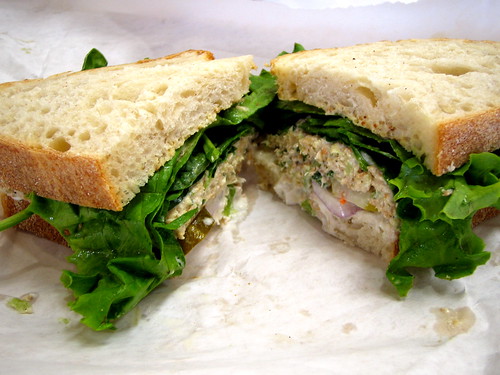 Kevin got the vegan BBQ. It was supposed to be heated but wasn’t really all that warm. The texture was satisfying but I’d probably punch up the flavor of the sauce a bit. I like a bit more oomph to my BBQ sauce. 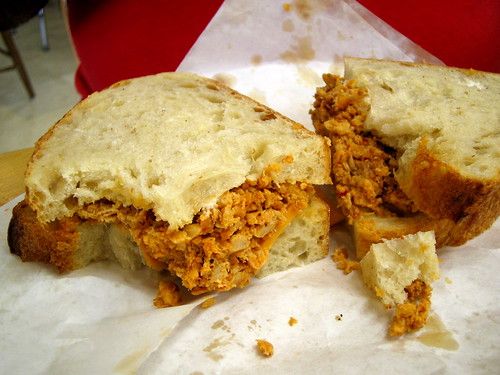 They also have baked goods. I picked up this orange cookie with chocolate glaze that I ended up eating on the road Tuesday. It was a fat cookie and the texture was somewhere between shortbread and a scone. I’d be tempted to eat this for breakfast. I think I’m more of a chewy cookie sort of person. The orange flavor was lovely and the simple chocolate glaze was a nice contrast. 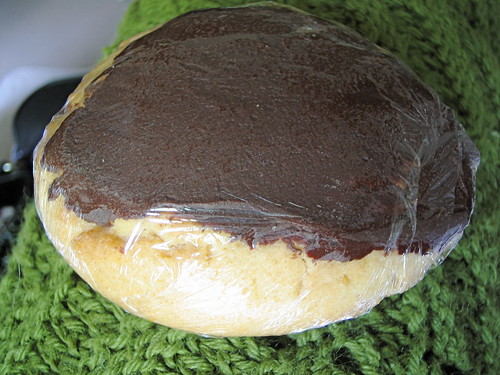 Ellwood Thompson’s also carries some of Twin Oaks‘ products. They use only organic, Virginia-grown soybeans in the products. So I picked up their chorizo, breakfast sausage, regular tofu and Italian tofu. Once we try these out, I’ll give a report on how they were.

Okay, I haven’t been baking non-stop all weekend, but I did get a few things done. I couldn’t let the extra time go to waste. My choice of what to make often revolves around what is convenient ingredient and time wise. Apparently I’m all about jeffrey Hamelman’s Bread lately. So why fight it?

First thing I did was feed all my cultures. And I saved some cast-off to make sourdough waffles.

First bread up is the Golden Raisin Bread. This one calls for a culture plus a little bit of commercial yeast. I still have two cultures I haven’t used yet, so this made use of one, the Alaska. With a good % of whole wheat flour and some rolled oats thrown in for good measure, this turned out to be a pretty hearty and healthy bread. My slashing is definitely a problem. Nothing I’ve tried is sharp or thin enough to do the job properly. I have some proper lames on the way though.

Those went off without any problems. But I do dumb stuff from time to time. Like, I’ve had a dough rising in then oven, forgot and turned on the oven to preheat. Der. This weekend my dumb thing was to have the olive levain dough on top of my stove while the oven was preheating for the raisin bread. Oh yeah, on the burner above the oven vent. So I ended up cutting a chunk of that dough off. See, here is the olive dough cooking away on the burner with the raisin dough next to it and my waffle batter.

So, I kind of thought I might have killed the olive levain, but I continued as planned anyway. After a couple of folds, I shaped it and put it in the fridge to retard for what ended up being about 24 hours. It came out of the fridge a little sloppy and flat, so I kind of pulled it back into an oblong loaf shape, slashed it, spritzed it with water and threw it in the oven to bake, a couple of ice cubes chucked in the bottom for steam. Sure enough, it started rising. I hadn’t killed all the yeast! Sure, I lost some oven spring, but it still turned out wonderful. It has received nothing but compliments so far. I can only imagine how good it’ll be if I don’t try to ruin it!

There was much more to baking day last Saturday than the Rustic Bread. It was time to jump back into sourdough. My first attempt was using my own starter which I ignored and then finally threw out because the smell freaked me out. I probably could have just fed it a lot and kept it going, but ended up ordering some starter from Northwest Sourdough instead. Also, I didn’t take into account my crappy oven so ended up with a pale top and almost burnt bottom. Hey, that’s what practice is for, right? Oh yeah, and my 2nd attempt was rising in the oven when I forgot it was there and preheated the oven. D’oh!

So, this time, I decided to make the same recipe, the Vermont Sourdough from Jeffrey Hamelman’s Bread using two different starters, Australian and Danish Rye. Just to see the difference and as an excuse to make even more bread. I mean, if you’re gonna heat up the oven for 4 loaves, might as well make it 6!

The difference between the two was subtle. In the end, I think the Australian wasn’t quite as sour. The rise and crumb seemed to be about the same. These are the loaves with the Rye starter, but the other looked about the same: 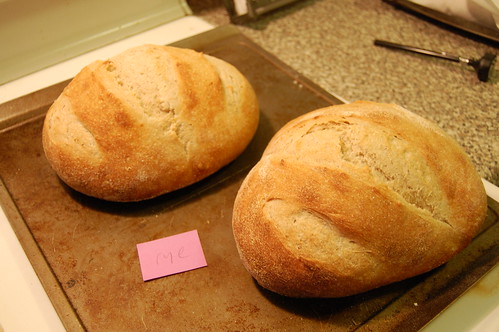 Here is the crumb from the Rye starter: 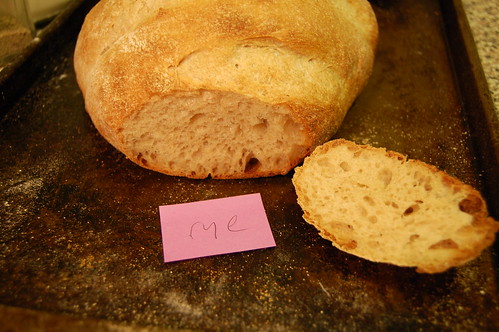 The crumb of the Australian starter. As you can see, I fear my oven going crazy and shooting up in temperature and burning my breads, so I have a habit of taking them out as soon as the internal temperature reaches 205-210 degrees F. 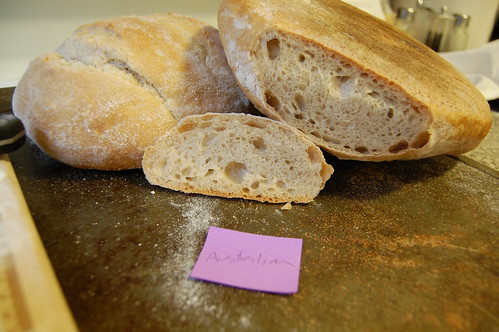 And here is a slice of each side by side. The Australian wasn’t actually flatter than the Rye, I was just further into the Rye loaf when these were cut. 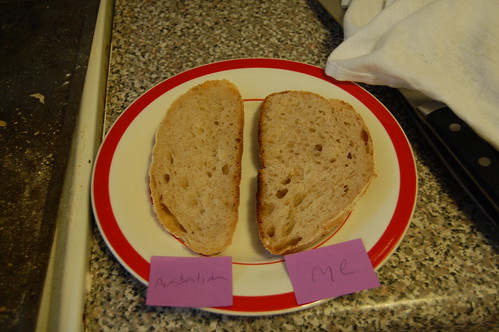 All in all I was really happy with both. Obviously there’s lots of room for improvement, but I think I’m doing pretty well for someone that has no idea what she’s doing. 🙂

How did I use all this bread? Gave a bunch away, of course. Ate it sliced with Earth Balance. Sliced with peanut butter. Toasted with EB alongside Lentil and Pastina Soup. Made French Toast with it and had with tofu scramble and obligatory green vegetable, broccoli. And had this morning toasted with EB and pomegranate jelly and with leftover scramble.