The latest barage of Pizza Hut P’Zone commercials is really getting on my nerves. It shows dudes totally chowing on their $5 meal, holding the whole thing in both hands. This is a different commercial than the one they’re showing now, but you get the idea. Each dude has a whole one in front of him. Each guy is going to eat a whole one. So why is it that their nutritional information shows a serving as half an order? I know why. Because they don’t want you to know that if you eat a whole one, and I’m being kind by choosing the pepperoni one, that’s 1260 calories, 48 grams of fat and 3,160 mg of sodium. Wow, happy heart attack! 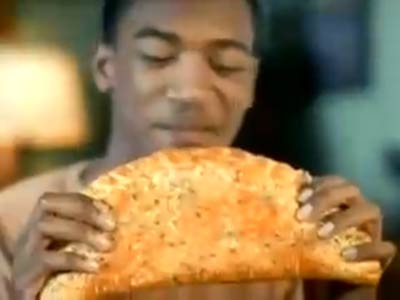 This past week, we’ve been eating a lot of raw food. But I’ve failed to take pictures of most of it. I already had Raw Food Made Easy by Jennifer Cornbleet. I chose it as my first little step into raw because it seemed like most of the recipes could be made without any crazy kitchen equipment. I don’t think I’ve even seen a recipe call for a dehydrator yet. And my blender, crappy as it is, has been able to handle everything put to it.So what have we tried? Below is the first dinner, cucumber soup and not tuna paté on red bell pepper planks. I’m not sure exactly why she uses tuna in the name because it is in no way fishy. It is good though. More like a chicken salad in flavor though. I’ve also used it smeared into celery sticks, on ryevita crackers and mounded on a chopped salad. I didn’t know how I’d feel about cold soups, or, more accurately, room temperature soups, but these have been really nice. The cucumber one was made creamy with avocado and was flavored with dill. 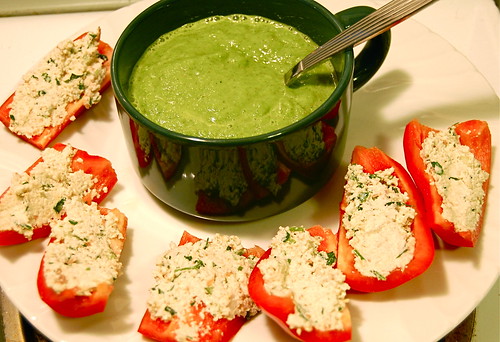 What else have we tried? The Piña Colada Smoothie, Marinara Sauce on zucchini ribbons, Walnut Paté, Cream of Zucchini Soup, Papaya Lime Soup, and Not Tuna Sandwiches. The patés keep for a while in the fridge, so they’re good make ahead items. Other than going to the store, the only other thing you really need to think about in advance is soaking the nuts in some of the recipes. Otherwise, the prep work isn’t any more labor intensive than anything else I would make. So I’d say this is a good book to use if you want to take baby steps into raw food.

Apparently THE health story this week was salt and that the FDA is considering putting limits on the salt allowed in processed foods. I tend to have NBC on the TV while I’m getting ready for work. Occasionally, if I’m late, I’ll catch some of the Today Show. Whoever is in charge of their health reporting is not that bright. In my last rant about them, I pointed out that they took that “pregnant women need to eat more fish” study at face value even though it was funded by the seafood industry. Now, on this salt story, I didn’t hear them once suggest that you buy fewer processed foods. I wonder why that is? Is it maybe because it would piss off their advertisers? Hmmm, I wonder? Anyway, this U.S. News and World Report story makes “cooking from scratch” the first suggestion on how to cut salt out of your diet. Well, duh. See, now how hard was that? But it gets even better. Apparently this is a non issue anyway. Check out Junk Food Science’s detailed analysis of the issue.