Because I have no original thoughts, I totally copied Leigh’s meatball subs. When she posted about them a couple of weeks ago I knew it was only a matter of time before I had to make them. Last night was the night. A couple of soft rolls, Italian Sausage Match Meat, Teese, and a jar of Trader Joe’s marinara. Pretty lazy food, but really tasty! I was surprised that the marinara needed no doctoring. 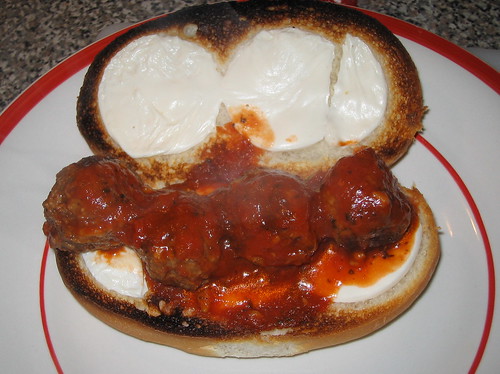 I defrosted the Match Meat and formed it into balls, Then I baked them on a cookie sheet for about 20 minutes at around 400 degrees F. Around halfway through they should be turned. It was more like 3/4 of the way through for me because I wasn’t paying attention. Then, I tossed the marinara into a sauce pan and simmered the balls in the sauce until everything was good and warm. The rolls were split, Teese slices placed along both sides and then it we broiled until the Teese melted. Slapped on some balls & sauce, then ate it up. Yum!

Over the past few weeks I’ve been really bad about taking pictures of food. There are various reasons: laziness, forgetfulness, ugly food, repeats, and so on. Anyway, here’s a list of stuff I’ve cooked lately but haven’t blogged: