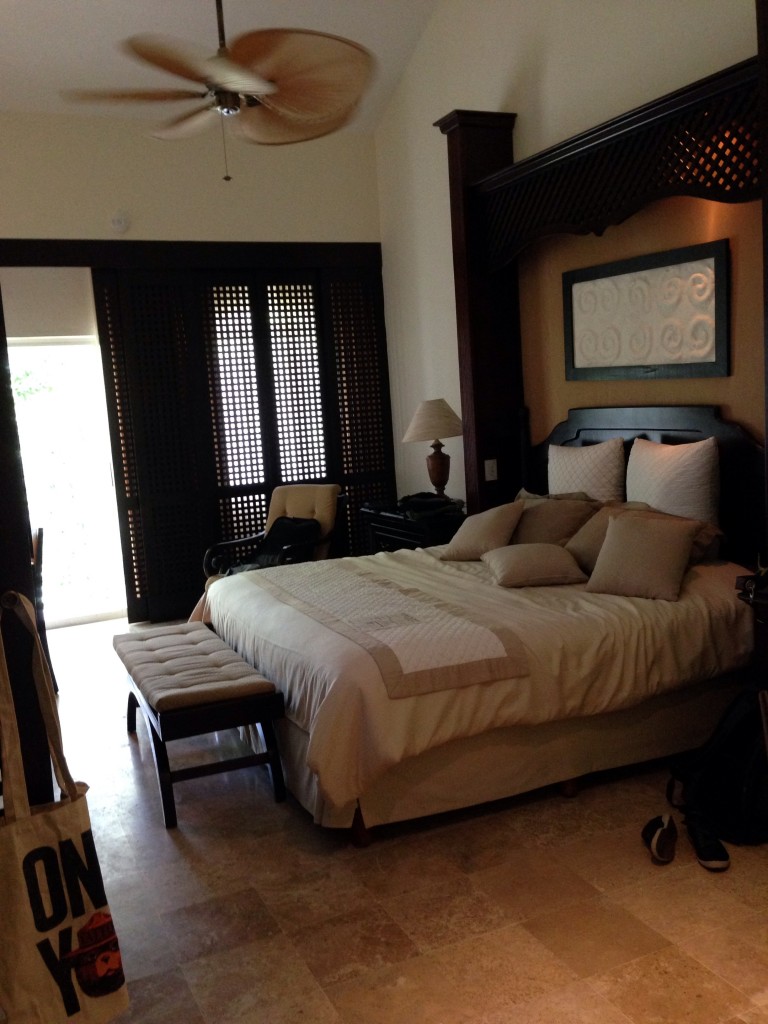 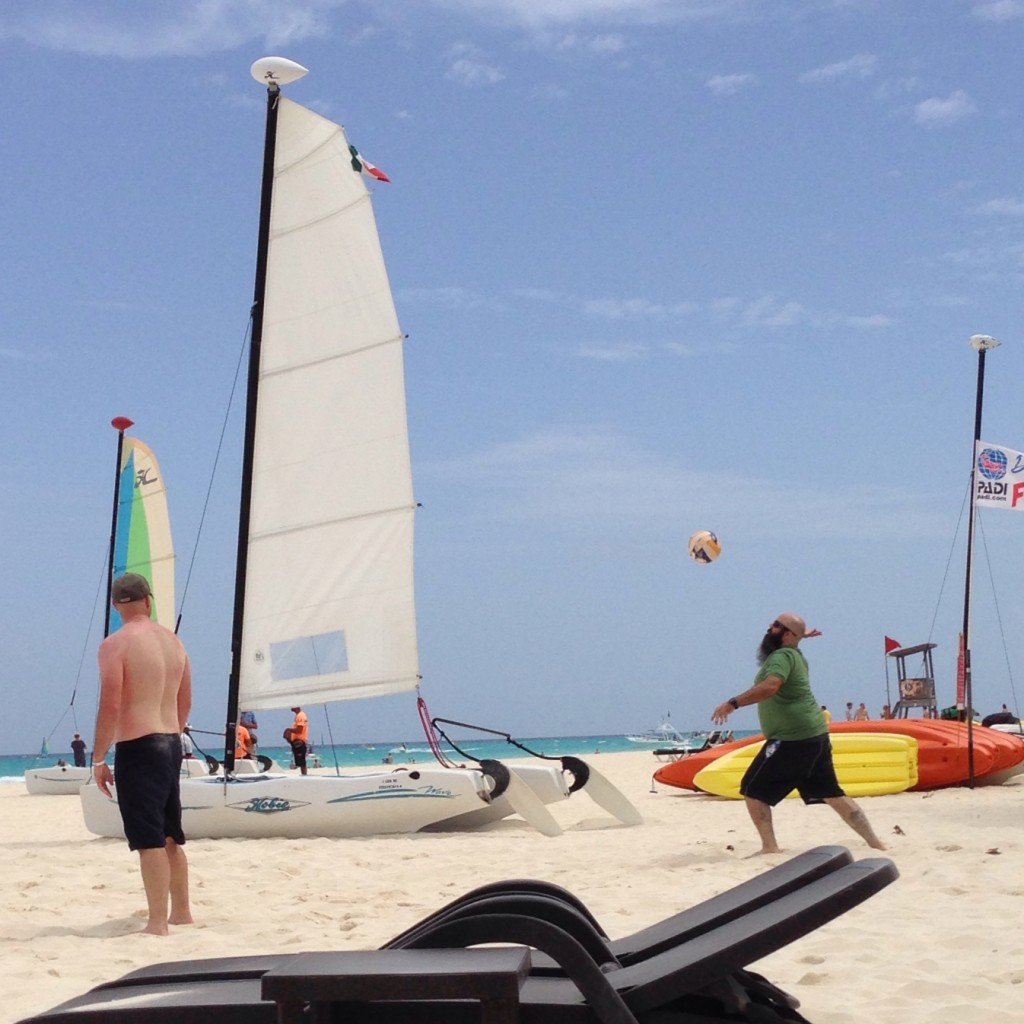 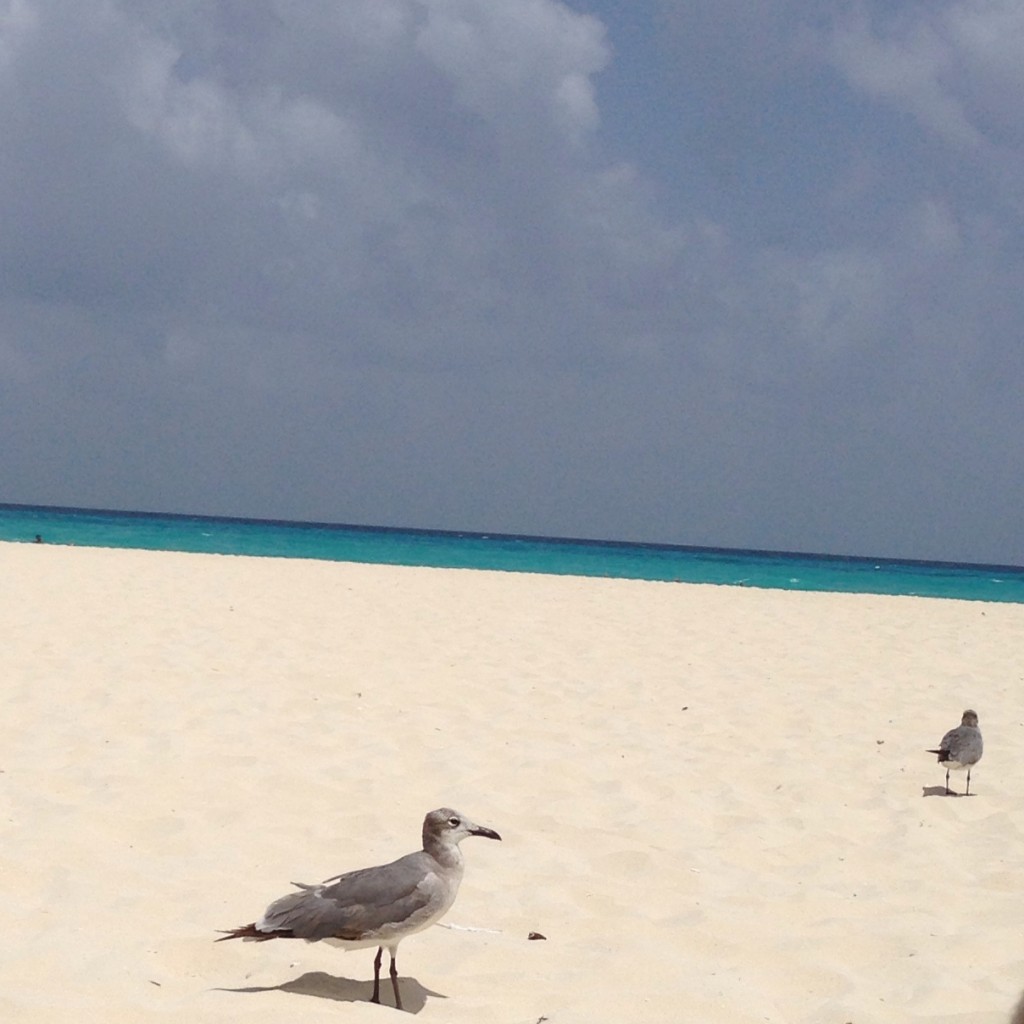 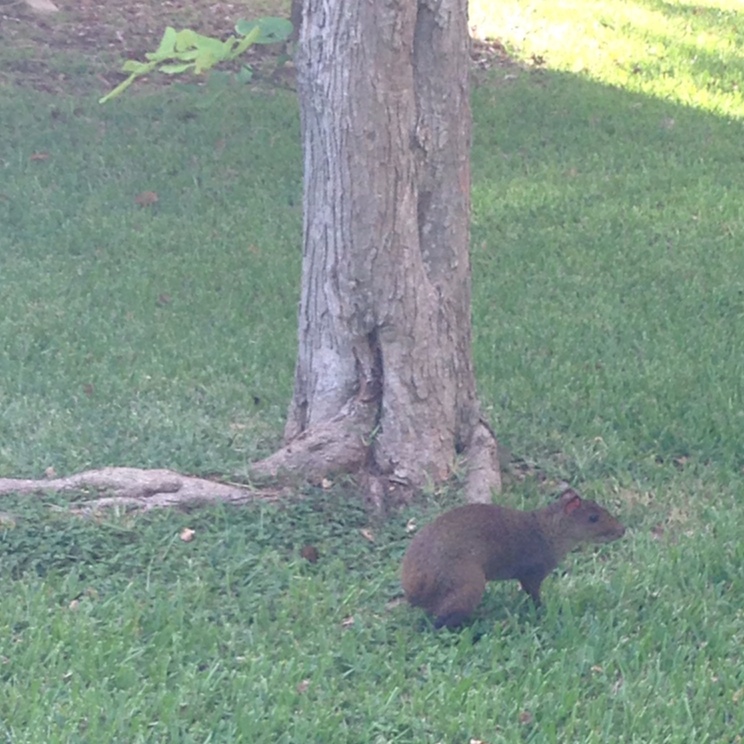 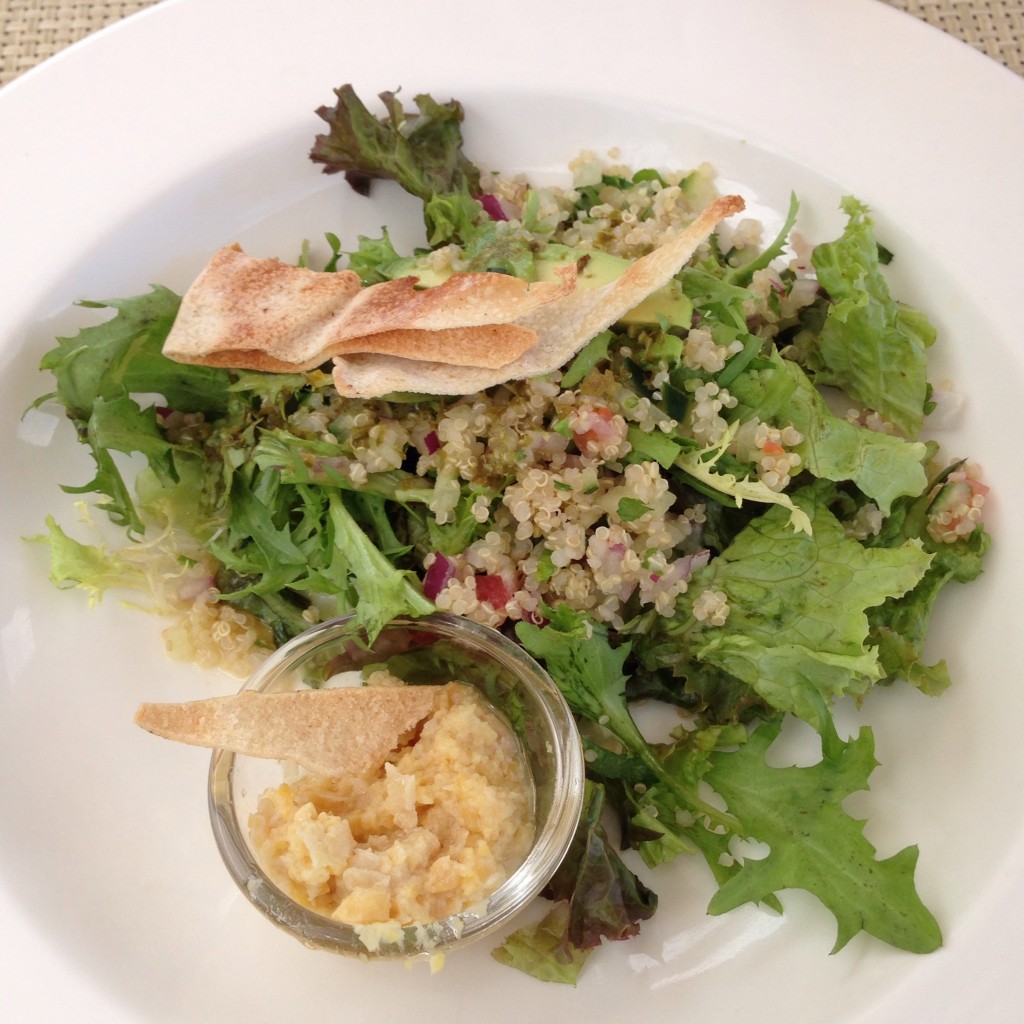 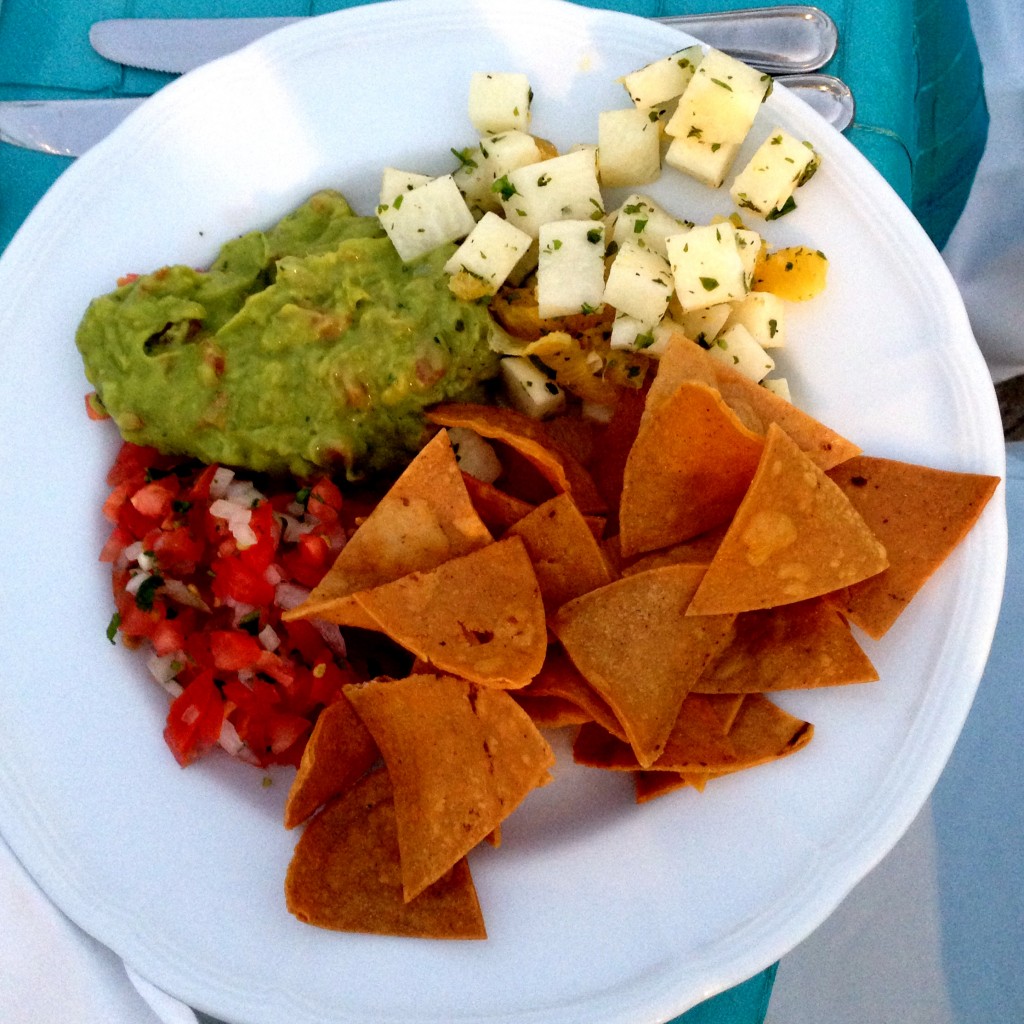 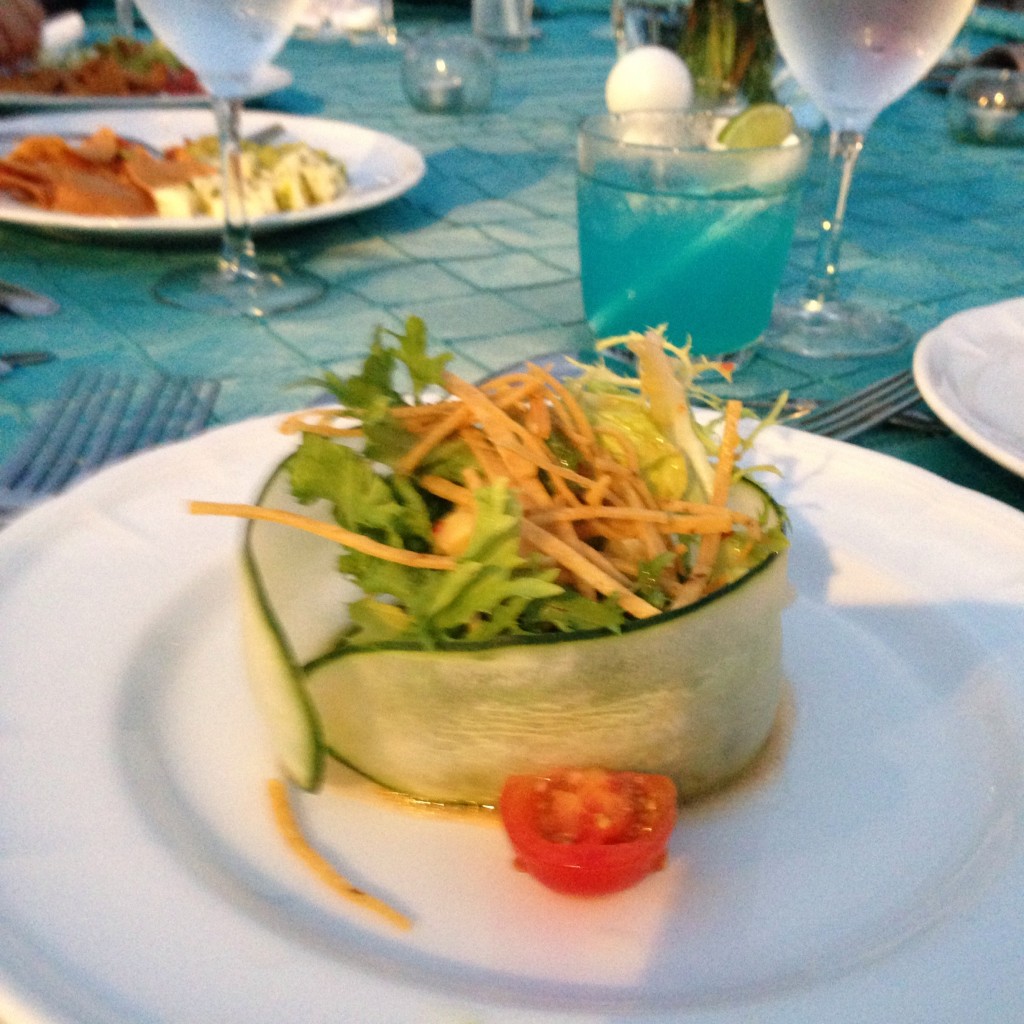 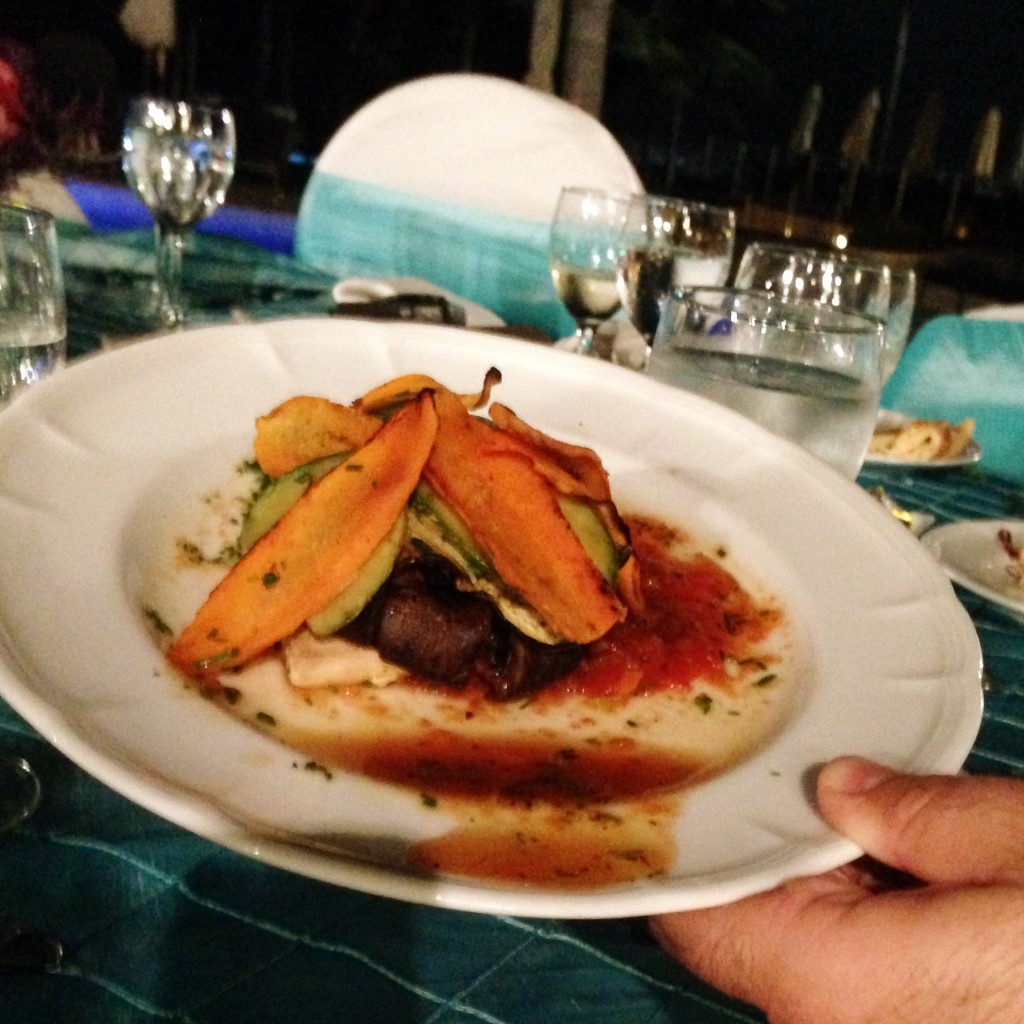 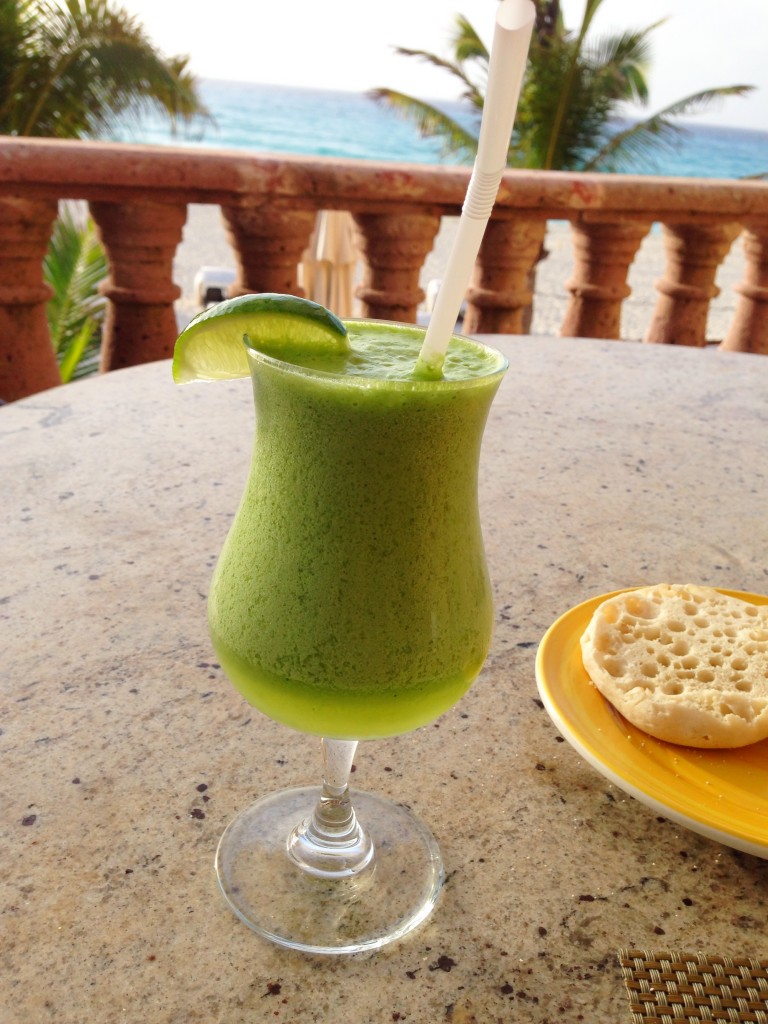 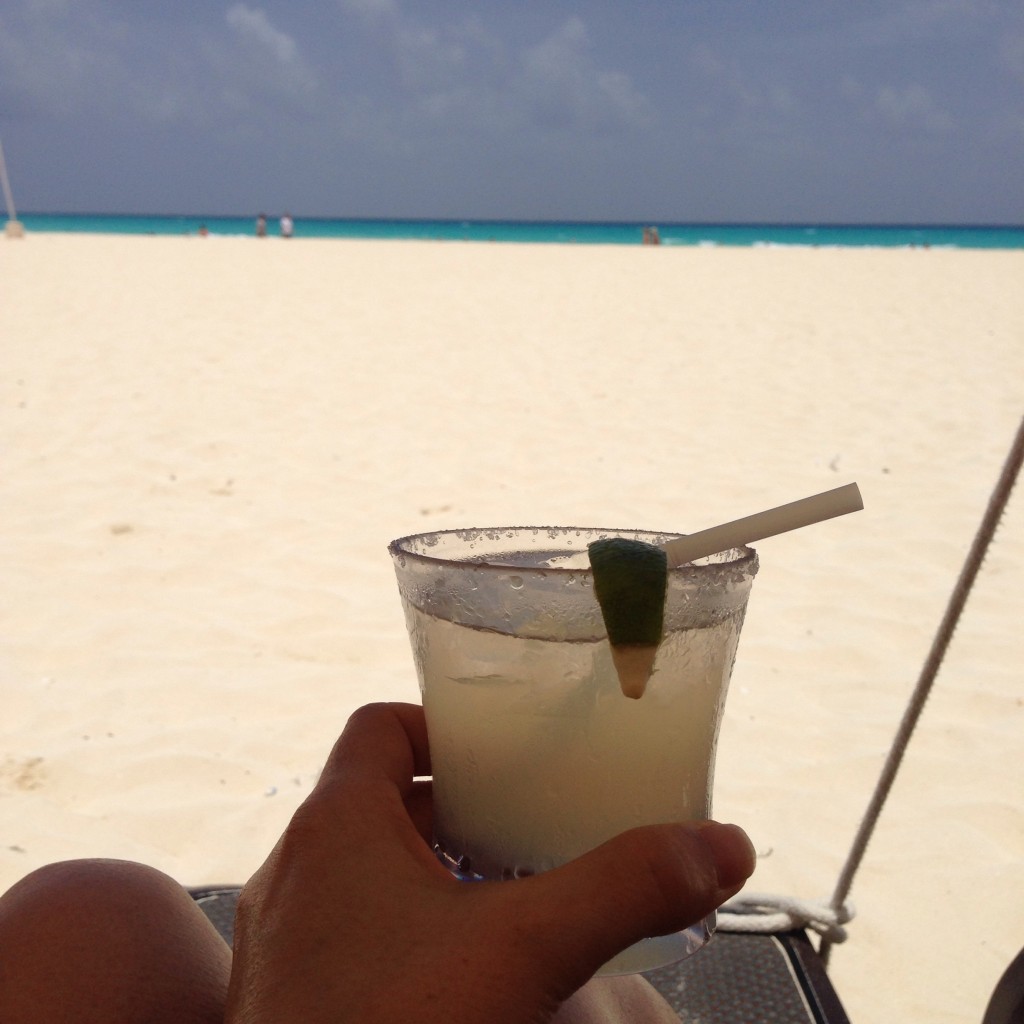 One of the cool things about Vegan Mofo is that while you’re cruising around checking out other people’s posts, you get ideas for new posts of your own.

This happened to me yesterday as I read Bianca’s post about vegan sugars. It’s true, it can be hard to find vegan brown sugar and powdered sugar in certain places. And sometimes even when you find it, it’s really expensive.

A while back, our supplier for the bakery was out of vegan brown sugar. For a few weeks. Our supply was completely cached and we had to figure something out. Buying retail bags would be way too expensive. Since brown sugar is just sugar and molasses, you can just add sugar to molasses! Der. I just googled how to make brown sugar to get the ingredient ratio. After this, we just kept making it instead of buying it. It’s cheaper and easy to do.

At home this is especially handy when you don’t bake often and would rather not have an extra bag of stuff you rarely use taking up space in your cabinet. So here’s how to make brown sugar: 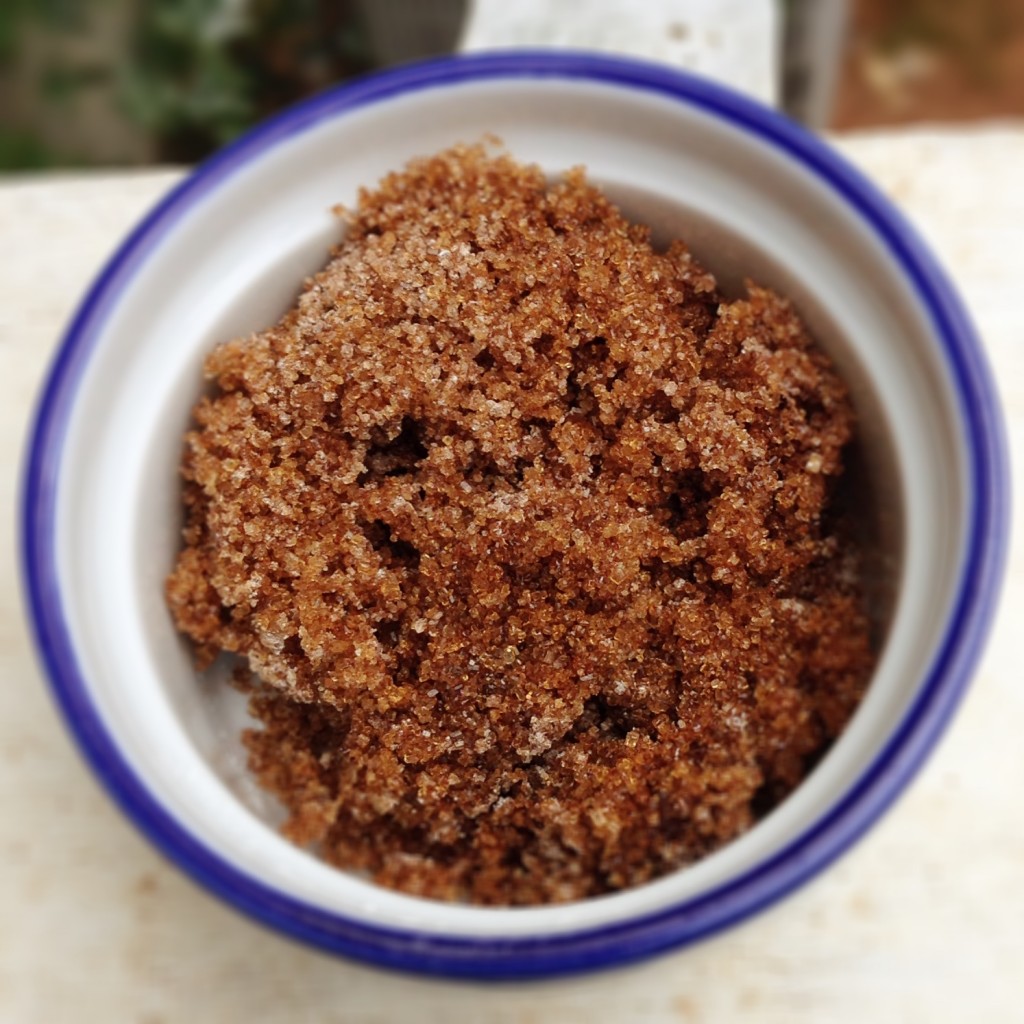 Mix together with a hand mixer or stand mixer. Use immediately or store in an air tight container.

When you find yourself in the possession of three five-gallon containers of peaches, you need to figure out how to get them prepped to use in baked goods in the quickest, easiest way possible. It’s probably too late for this season, but now you’ll know what to do next Summer. 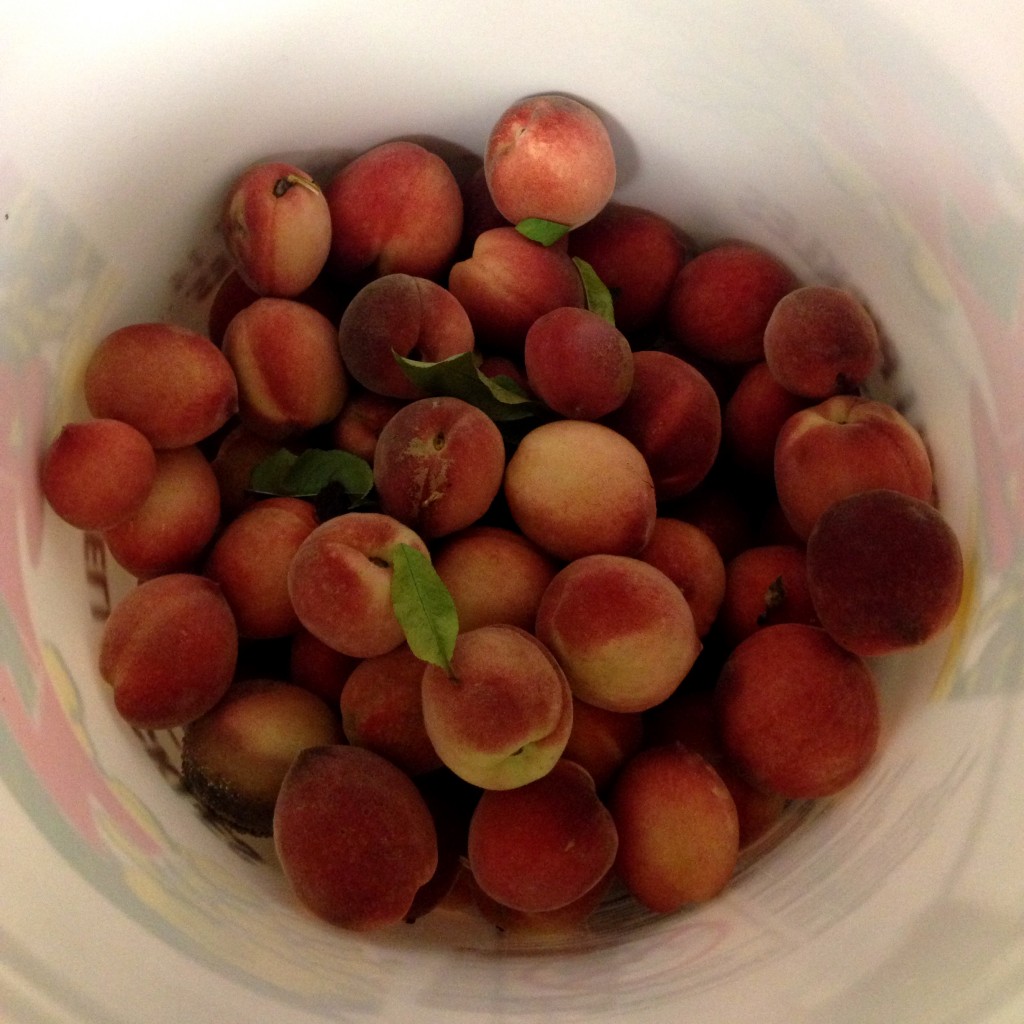 First, cut an “X” in the bottom of the peaches. 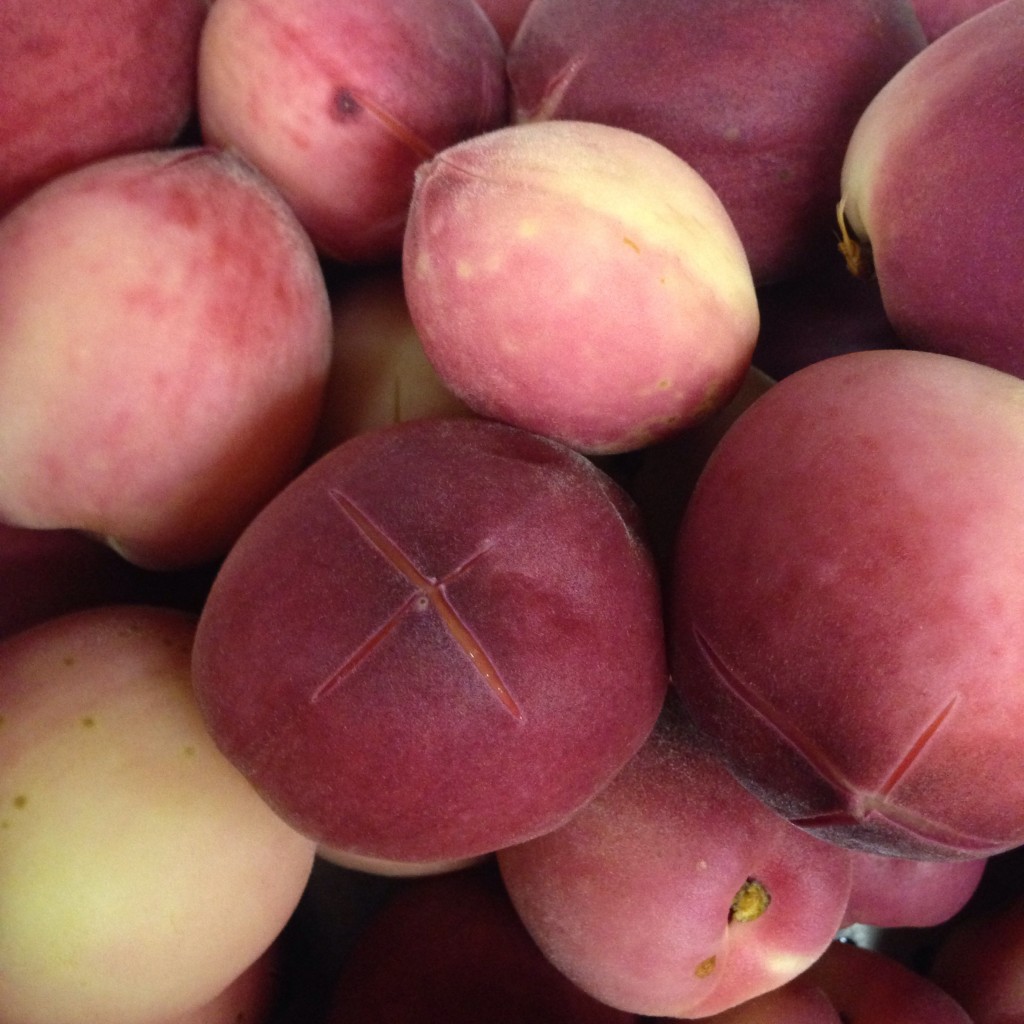 Then blanch the peaches in boiling water for a minute or two. 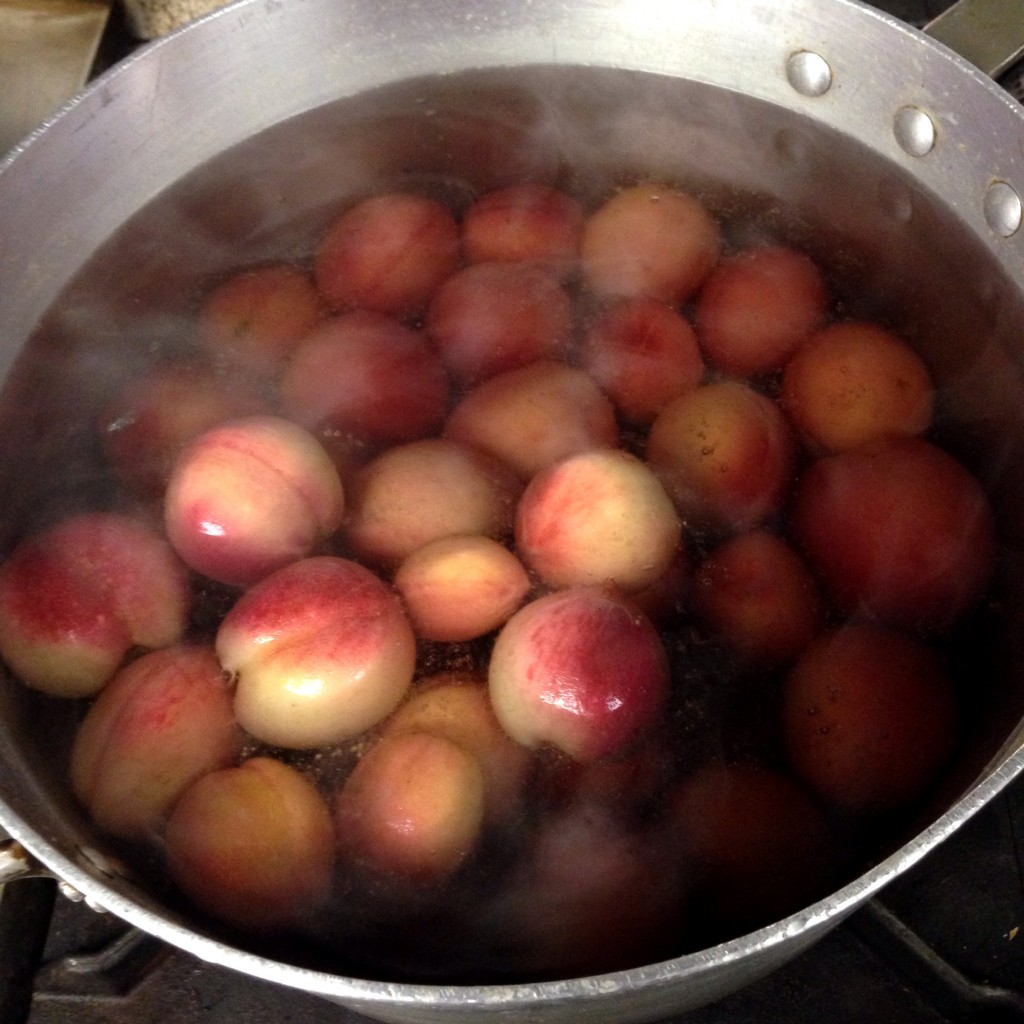 Then plunge the peaches into an ice water bath. 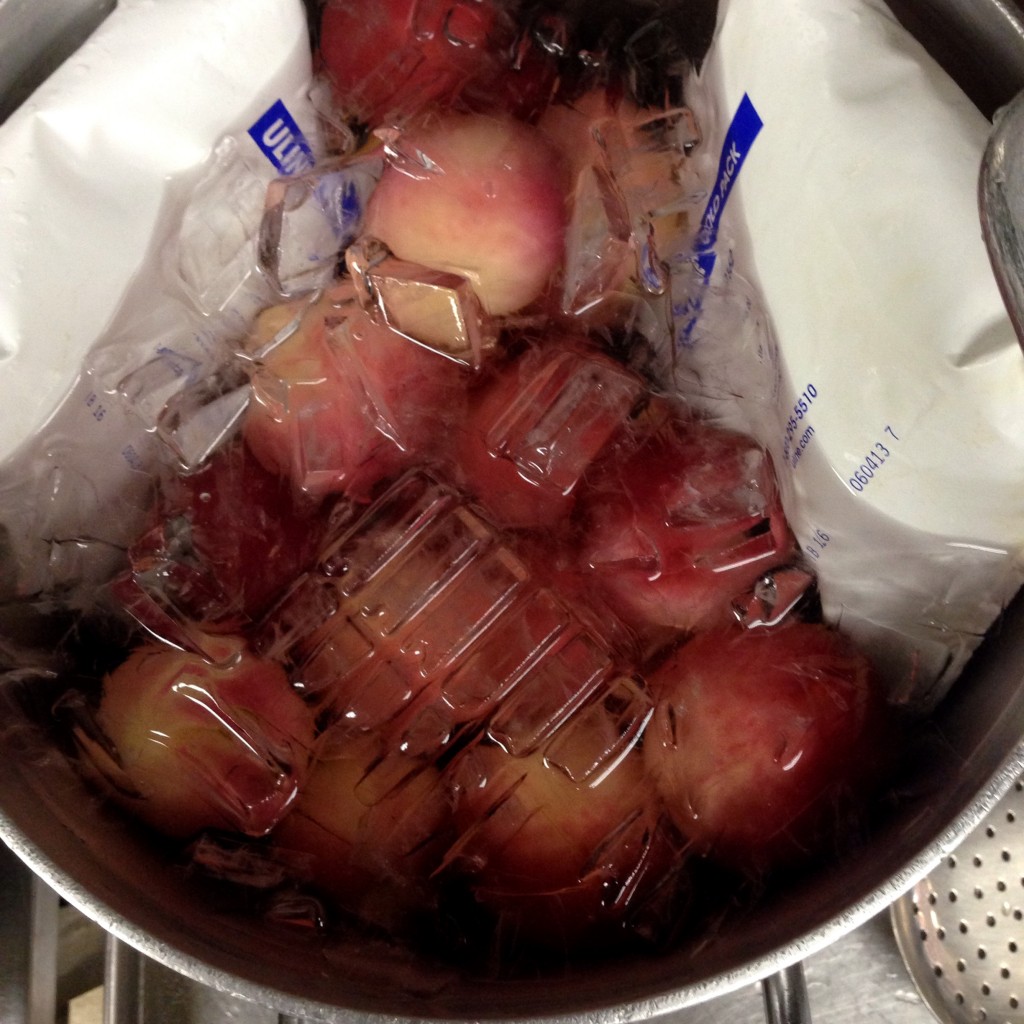 Now the peels should slip right off. If you’re lucky, you’ll have the kind of peaches that release from the pit easily too. If not, you’ll have to slice them off the pit. But hey, at least the peeling was easy, right?

Just because you’re vegan, that doesn’t mean you have to throw out all of your non-vegan cookbooks. Making a recipe vegan is oftentimes really simple. If the recipe is good in the first place, making it vegan won’t change that fact.

This June, the peach tree we had at the bakery produced a bumper crop. So many peaches. So I needed to come up with some more ways to use them. I did the expected peach cobbler, peach pie, and even some peach crumb muffins. So I turned to the internet like we modern folks do. And this Spiced Peach Carrot Bread caught my eye.

When trying to find an easy baking recipe to veganize, look for one that has two or fewer eggs. It’s not that you can’t veganize one with more eggs, fewer is just easier. Milk and butter are easy to replace your non-dairy milk of choice and Earth Balance.  My egg replacer of choice in most baked goods is flax. I use one tablespoon of ground flax plus two tablespoons of warm water to replace each egg. So here’s this recipe above as made and served at the bakery: 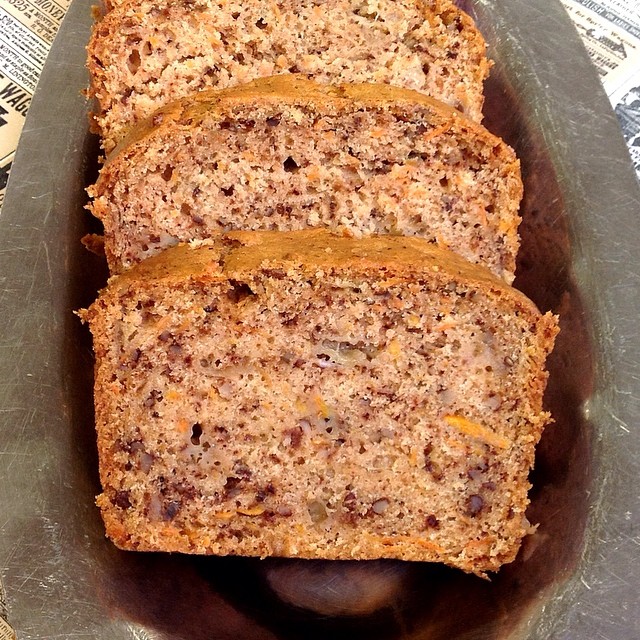 Stir together flour and the rest of the dry ingredients in a large bowl; add peaches, remaining ingredients, and toasted pecans, stirring just until dry ingredients are moistened. Spoon batter into a lightly greased 9- x 5-inch loaf pan.

Bake for 1 hour and 5 minutes to 1 hour and 10 minutes or until a long wooden pick inserted in center comes out clean. Cool in pan on a wire rack 5 minutes. Remove from pan to wire rack, and cool completely (about 1 hour).

Whoops, fell off the VeganMofo wagon there for a while. Was a little bit preoccupied with closing down a business. Now on to other things one of which is catching up here.

For new vegans, one of the challenges is figuring out what to eat. Really, this happens any time you drastically change your diet. These days, there are tons of awesome vegan cookbooks out there. But a lot of them either rely on ingredients that can be hard for new vegans to find or they’re more complicated than the skills of some novice cooks can handle. So here are a couple of cookbooks I like to recommend to new vegans with simple recipes made of mostly easy to find ingredients.

Vegan On the Cheap 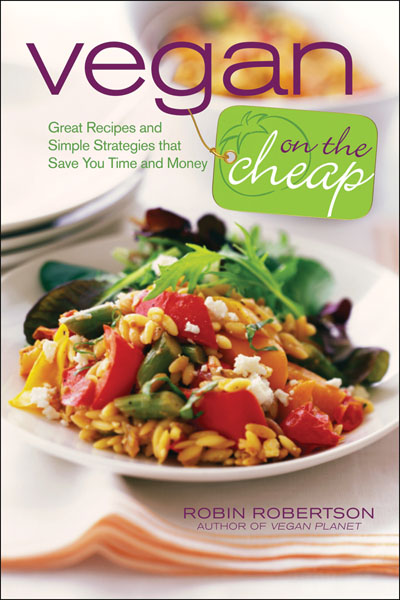 I actually got Vegan On The Cheap by Robin Robertson after the bakery opened. Two things I had little of were time and money. After long hours of baking, I didn’t want to spend much time cooking at home. And I certainly didn’t want to go to four different stores to get all the ingredients I needed. Normally I would rather cook with fresh ingredients from the farmer’s market, but frozen and canned ingredients are much easier to keep on hand without going bad when your schedule is volatile.

Most of the recipes in Vegan On The Cheap are composed of ingredients easily found in a regular grocery store. One of the recipes I make over and over is the Barbecued Black Bean and Tofu Burritos. I make double and triple batches of the black beans, make tofu separately, and then eat it in tacos, burritos, over rice, as nachos, etc. We never get tired of these beans. Other favorites: Cincinnati Suburb Chili, Korean Cabbage Salad with Tofu, Penne-wise Peanutty Pasta, Dan Dan-style Linguine, Coconut Curry Rice, Tofu Fried Rice, Tropic of Tempeh, and Rice Island Casserole. Right now as I’m writing this, I’ve got the Slow-Cooker Seitan Pot Roast going in the kitchen. It’ll be the first time I’ve tried that one.

Vegan On The Cheap’s first chapter covers basics. You’ll save money by making your own vegan parmesan, sour cream, mayo, vegetable stock, and beans from bulk dried beans. If you find a book like Veganomicon overwhelming, Vegan On The Cheap will cover the basics. 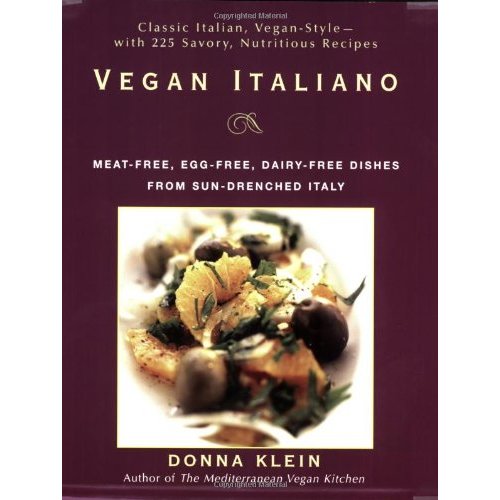 Who doesn’t like Italian food, right? Vegan Italiano by Donna Klein is a whole book full of vegan Italian recipes! Bonus: no meat substitutes required. So if you don’t like fake meats, tempeh or tofu, this is the cookbook for you.

One nice feature in this book is that in some of the recipe sections, lighter fare is separated from hearty fare. For example, in the soups, you have light soups and then meal-in-a-bowl soups. I tend to go for the meal-in-a-bowl soups. Some of my favorites are Lentils and Pastina Soup and Chickpea and Pasta Soup. For an extra nutritional boost, I’ll add half a bag of frozen spinach to each.

The Potato and Green Bean Salad is a big hit at potlucks. Make it with purple potatoes and it’s extra pretty. Naturally there are plenty of interesting pasta recipes. And if you want to jazz up your vegetable sides, you’ve got plenty of options here. For a lazy, impressive dessert, try the Chocolate Strudel. Accidentally vegan Pepperidge Farm Puff Pastry makes it extra easy.

What is your favorite cookbook to recommend to a new vegan?