Apparently I can’t stop with the Daiya. I swear they aren’t paying me. Or even sending me free cheese. I’m not opposed to that though. 😀

How is it that there are so many styles of vegan mac & cheese that are so freakin’ good? You have ones based on nutritional yeast, cashews, whatever magic Soul Vegetarian puts in theirs, etc. So I had to see how Daiya would do. And the answer is, quite well thank you very much. Because I’m lazy, I used this recipe. I still had some lunch meat log so I chopped that up in place of the veggie ham. I also made a half batch so I wouldn’t be eating nothing but mac & cheese for two weeks, not that there’s anything wrong with that. When making it, I went with the lower amount of soy milk and I think I would like it saucier so next time I’ll try the higher amount at least. The taste was spot on though. I say this as someone that hasn’t eaten cheese in years, but I have been through a ton of vegan mac & cheeses and this one seems to hit closest to the blue box kind. I’d love to get the opinion of an omni or vegetarian on Daiya.

Seriously, how 70s does this plate look? 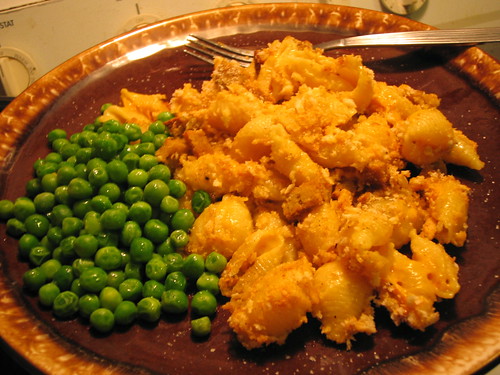 Jeni’s comment on my previous post about her to do list gave me an idea for a VeganMoFo post. First of all, how do you guys keep track of the food inspiration you get from other blogs and websites? I keep up with blogs using Google Reader to subscribe to their posts. So when I see something I want to make, I just star it. Then I can go back and look at my starred items later for inspiration. If it is something on a website, but not blogged, I’ll bookmark it. Eventually, I try to put all of those into MacGourmet recipe software. Try.

So that brings me to the post idea. What is languishing in my starred items list in Google Reader? No, I’m not going to post them all. But let’s see what kind of things are hanging out in there:

Sweet Potato Falafel with Yogurt-Tahini Sauce: Sweet potatoes are so tasty, cheap and healthy that I’m always looking for new ways to use them. These would probably freeze up well for quick meal options.

Chilli Tofu with Beans and Bok Choy: This doesn’t look like your average stir-fry. That little bit of tamarind is going to give it a nice sour note.

Samosa Soup: It’s officially soup season and this one sounds amazing. Who can’t use another potato soup variation?

Seitan Chorizo Crumbles:  If you don’t have a local source for veggie chorizo or you just want to save a few bucks, make your own!

Sweet Potato Pugliese Bread: Have you got a bit of leftover sweet potato? Make some bread!

Frosted Orange Cream Cupcakes: It’s always a good idea to have gluten free recipes on hand should you need them.

African Peanut Soup with Red Beans:  I love a whole meal in a bowl. This soup has got you covered nutritionally.

That’s a good start. I probably could have had a long post just on sweet potato recipes I’d saved. Maybe I’ll do one of these a week with everything I’ve got saved up.

September has apparently been the month that treats come great distances to end up in my pie hole. First it was Voodoo Doughnuts delivered all the way from Portland, Oregon. Here is Chik-o-stik and something coconutty: 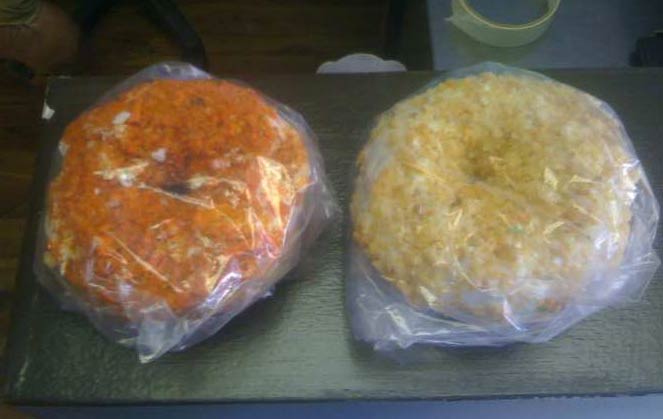 Then Kevin was in Las Vegas for work. You know what Las Vegas means…Ronald’s Doughnuts! I was too busy stuffing a vegan boston creme doughnut in my face to take a picture, but you can check them out at that link. So, yeah, I’ve never been to Las Vegas or Portland, but I’ve sampled of their doughnuts. How cool is that?

But wait, I’m not done. Last week, Danielle brought us back these Vegan Treats cakes from NYC. Now don’t judge it’s appearance. It did get knocked around a little in its little container, but it ate up just fine. 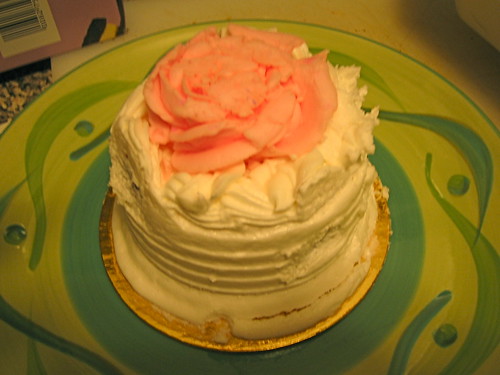 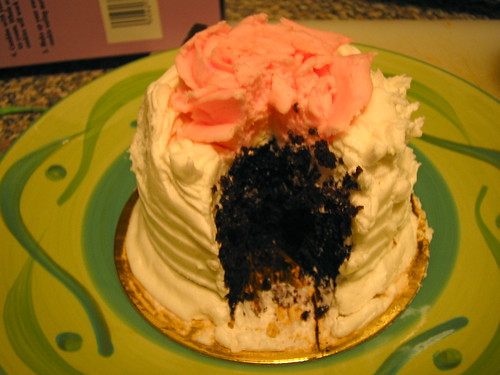 It’s a good thing I have a few pictures banked up that I can work off of for VeganMoFo. It’s been at least two weeks since I’ve gone to the farmer’s market so it’s been a lot of eating out,  quick store runs and eating down random food from my fridge and freezer. This week is going to involve a raw kale salad. I need it!

A couple of weeks ago, I posted about making Vegan Dad’s lunch meat log. These logs have seen me through many meals. Most of them looked something like this: 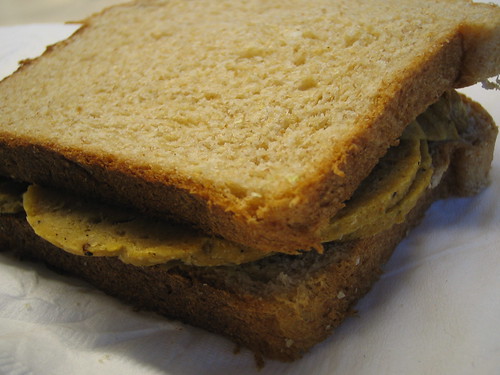 Yep, that’s the lunch meat nestled between two slices of whole wheat bread I made. The problem with baking your own bread is that it will sneak itself into every meal if you let it. PB&J for breakfast! Lunch meat sammich for lunch! Toasted and buttered with Earth Balance along side dinner! Well, at least it is whole wheat…

Oh, remember the polenta fries? Leftovers made a nice lunch side. Much better than potato chips! 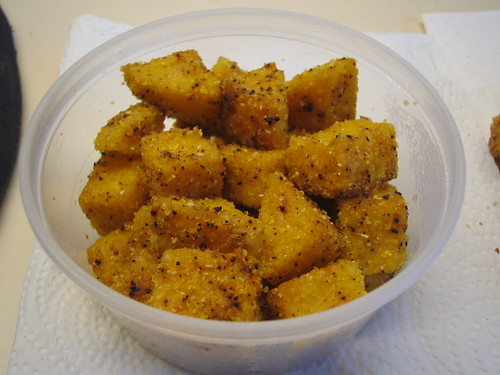