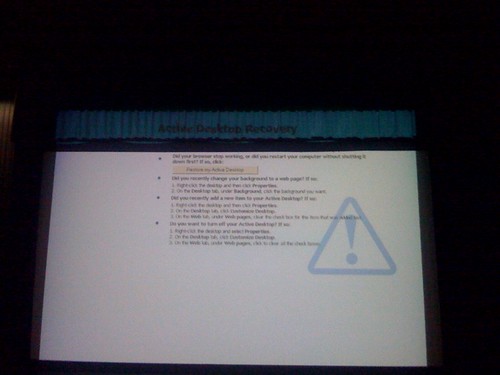 Hmm…this should have posted automagically. I wonder if Flickr’s email to post thingy is broken. 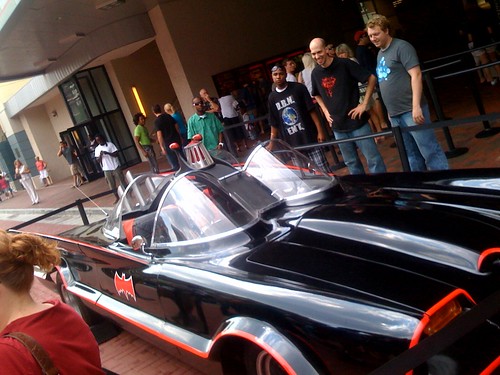 There’s a Batmobile at Atlantic Station, originally uploaded by abracapocus.

Good grief am I behind! I think I’d better just quickly recap the San Francisco trip and move on.

Saturday morning, we went to Alcatraz. It’s about the only touristy thing I really enjoy doing in San Francisco. I mean, you get a boat ride, 2 even, views of the city, views of the bridges, views of Alcatraz. Stomping around Alcatraz with your little headset you get all edumacated. Plus there are some amazing photo opportunities.

While we were down that way, we had to check out the sea lions. They’re stinky but really cute! On several of the docks, the males were having wrestling matches. One would stake claim to his dock and challengers would fling themselves up on it and wrestle with him until one of them was pushed off. On other docks, sea lions were just sleeping away ignoring all the barking going on.

Next, lunch at Herbivore, Divisadero where we had a shwarma war. Kevin got the “chicken” shwarma and I got the regular one. I think it was kind of a draw. But I will say that the seitan they used in mine wasn’t very shwarma like. It was cut in strips instead of slices. And it wasn’t seasoned like I would season shwarma. Oh, and of course, there was dessert, chocolate cake.

After that, we went to Zeitgeist to meet my friend Lisa. I hadn’t seen her since ’98. So we had fun catching up and I got a little loopy on 2 margaritas. Oh, and while we were there, someone I used to work with at Kinko’s said “hey.” Wow. So he gave me the rundown on a few people we used to work with. Small world and all that.

Saturday night we went to see Goldfrapp at the Warfield. The sound guy needed to be fired, but even so, it was a good show. And Alison said she was sick but she still managed to belt out a pretty full show. Unlike Elizabeth Fraser back when I saw the Cocteau Twins a million years ago. But I’m not still bitter…

Sunday, we managed to sneak in a breakfast at Herbivore, Valencia, before we had to go to the airport. I had the tofu rancheros and Kevin got the french toast. And we shared it up like we do. Both were great, but I really liked the batter on the french toast. It was a lot thicker than I’ve had it come out for me. I need to play with that because it made it that much better. We got blueberry cornbread for the plane and Kevin also got a doughnut. But since one of the kitchen guys splattered me with ketchup, I got a doughnut too! The cornbread was sweet and almost more like cake. The doughnut was also cake-like rather than, whatever the other kind is called. Good though and a really unhealthy way to end the short vacation.

Apparently it’s Baturday over on Fark. So I steal this image and link you to the rest. Why is it that LOL [insert anything here] never gets old?

Wait, wasn’t I supposed to be doing laundry or something?

When you find out Günther & the Sunshine Girls are playing your town, wait “playing”, how can you not go? And if it wasn’t for Kevin’s obsession with Günther (you can thank me later) I probably would have never found out about the show. Thank you soooo much for that. No really!

So it was pretty much what we expected in terms of performance. Günter moving from catalog pose to catalog pose while blonde chickies danced it up. All lip syncing of course. A little crowd chit chat in between. I think they were a little surprised that the crowd consisted largely of dudes. It was particularly amusing when they asked the crowd if there were any golddiggers out there and a bunch of dudes are shouting “YEAHHHH!!!” Someone else took a video of Pussycat that really captures the sausage fest aspect of the evening:

I got a partial video of the Christmas Song, but it’s not nearly as good since I wasn’t all up in the nest of dudes down front:

I’m sure a ton of videos will show up on the youtubes. There were plenty of people taking them.

Also part of the entertainment for the evening was a couple dry humping before and during the show. What made it even better was that the woman was wearing a spandex dress reminiscent of the best Contempo Casuals had to offer in 1988. It was essentially backless with a band around hold the top up at about bra level then material started again just above the ass crack. Or just below the ass crack which was the case much of the evening for this woman. Fabulous! Here’s a crackless view for you: 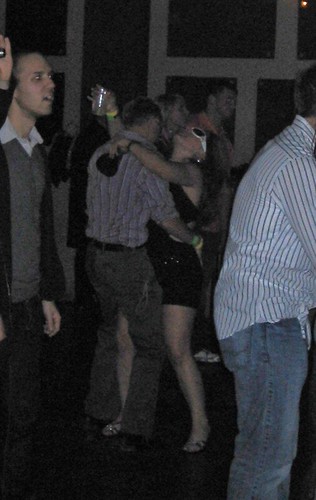 Anyway, I didn’t get very good pics, but the rest are here.