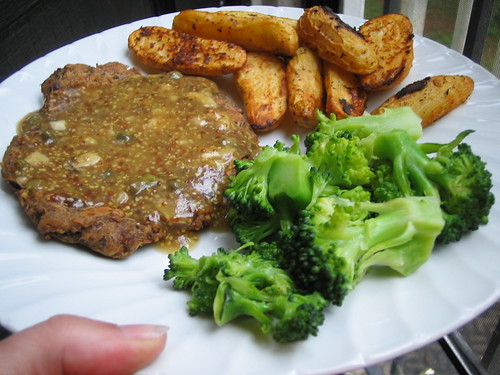 You know those spicy Persian ground meat kebobs? I’d been thinking for a while that Match Meat would lend itself well to this. So I decided to give it a shot. And I was right. Instead of making it into kebobs, I just formed it into patties and pan fried it. It would be even better on a grill. These were spicy and delicious. Here I’m eating it with Israeli Couscous from Veganomicon and some mixed veggies. 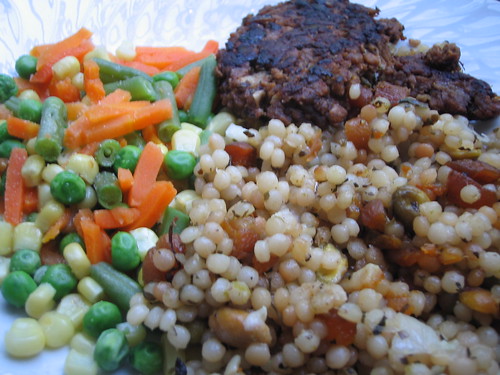 1. Combine Match Meat and onion in a large bowl; set aside. Heat oil in a 10″ skillet over medium-high heat. Add paprika, salt, cumin, oregano, mint, and pepper and cook, stirring constantly, until fragrant, about 45 seconds. Pour the spice mixture over the reserved Match Meat mixture and mix thoroughly with your hands.

2. Divide mixture into 4 portions and roll each into a thin cylinder about 10″ long and 1″ thick. Slide a flat metal skewer (see page 100) into each cylinder and press the Match meat around the skewer.

3. Meanwhile, build a medium-hot fire in a charcoal grill or heat a gas grill to medium-high (alternatively, heat broiler and position rack 7″ from heating element or just form into patties and pan fry). Grill or broil the kebabs, turning once, until browned, about 4 minutes per side.

Adapted from this recipe. 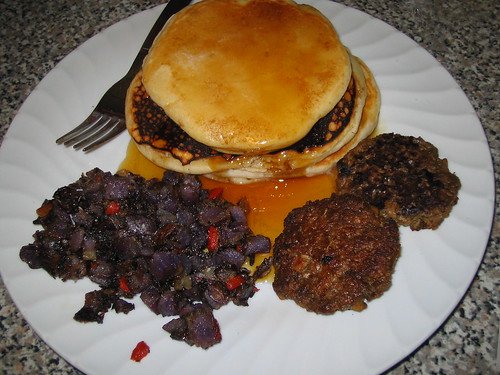 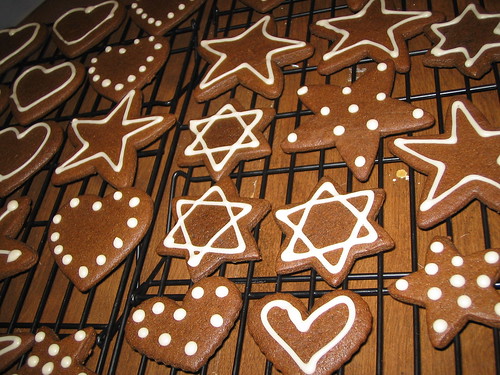 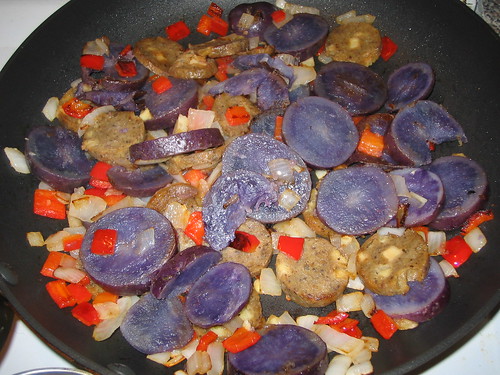 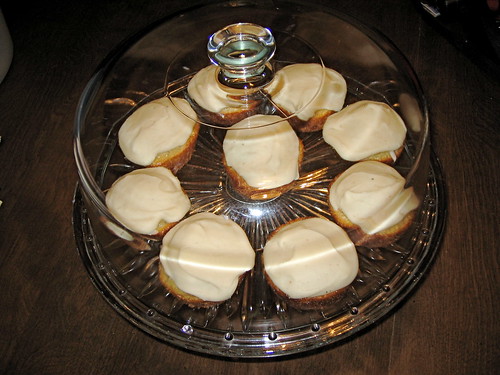 I don’t feel very writey right now, but here are a few food pics that have been piling up.

The Cajun Tofu from Yellow Rose Recipes has turned out to be a great quick week night dinner star. Once you have the spice mixture around, the rest can be made up of staples I keep around. This time we had it with some of the collards that are filling my freezer and some hash browns that cooked up quicker because I diced ’em smaller. Oh, and that’s a little bowl of home made apple sauce. 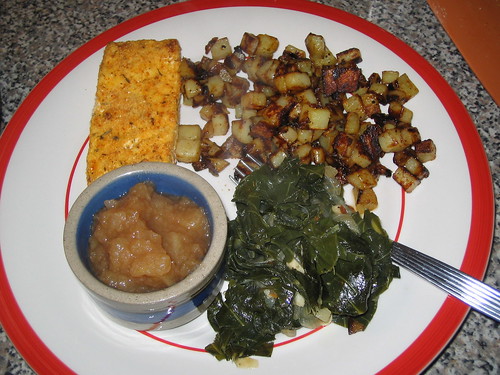 When I saw this fairly quick recipe for bread bowls, I knew I’d eventually be dumping come Cholent from Veganomicon into them. I was right! The dry milk powder was replaced with soy milk powder. 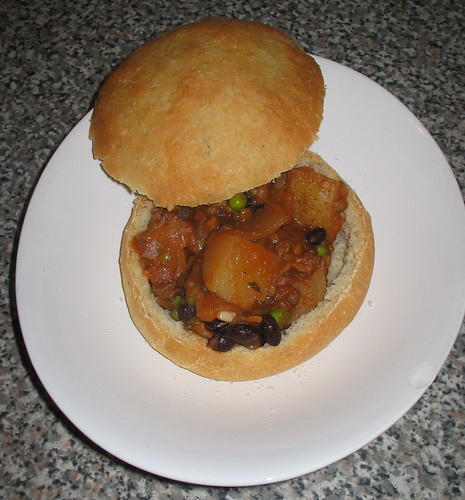 Trying to keep the healthy cruise diet going, I baked up some Asian tofu and ate it on a salad of raw kale and bok choy seasoned with sesame oil. 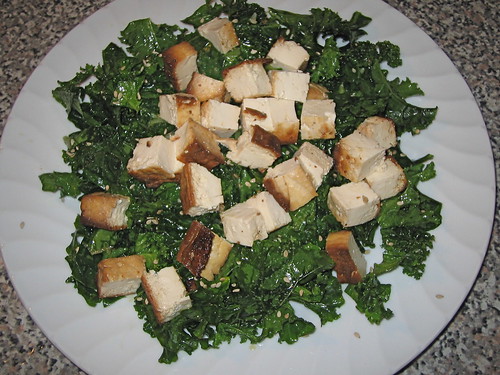 And finally, this Peanut Butter Quick Bread recipe looked interesting. I thought it would be even more interesting as Peanut Butter and Jelly Bread. So that’s what I did. The bread itself is not all that sweet like a lot of quick breads, so the jelly does not make it too sweet. I veganized by using a flax egg and soy milk as replacements. The recipe worked in both bread and muffin form. 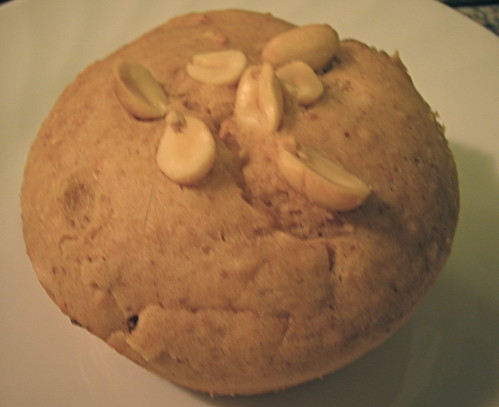 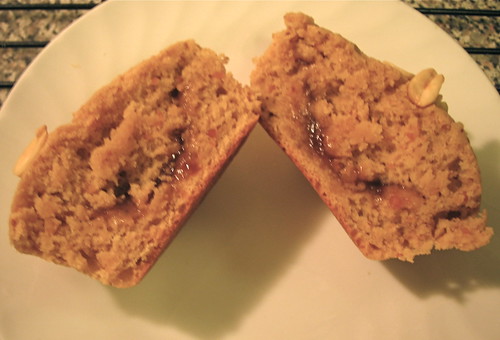 I thought yesterday morning was cold. Especially when Grover escaped as I was letting when I let Tak out for her first pee. Chasing him around the yard for ten minutes all bleary eyed at 5:30am was not much fun. He runs, he meows, he runs some more. I think he finally let me catch him when he realized he was cold. It’s a good think he’s a handsome cat. See?

On to food. If you haven’t made the Cholent from Veganomicon, this is the perfect time for it. After chasing Mr. Short Bus cat around the yard, I swear I would have eaten this for breakfast if I’d had any left. So warming and satisfying. The tvp chunks have the perfect chew to them. It’s like the stew my mom made growing up without all the death. Hell, next time I might even make it with biscuits on top like she did if I don’t make it into a pot pie form. 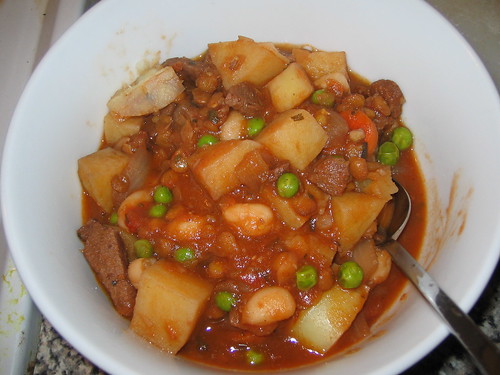