How did I go this long before making the Tempeh Wingz out of the first issue of the Don’t Eat Off the Sidewalk cookzine? Maybe it’s because I never ate chicken wings. Ew. Or maybe it’s because I still find tempeh to be a little odd, even though I like it every time I make it. Whatever the reason, it doesn’t matter now because these were a big hit! Messy to make and tasty to eat. Crunchy like they’re fried, but they’re not! Of course, the Earth Balance in the sauce might make up for the lack of frying. But I’m going to ignore that. Here they are in all their glory, sharing a plate with lemon roasted fingerling potatoes and a little pile of spinach. 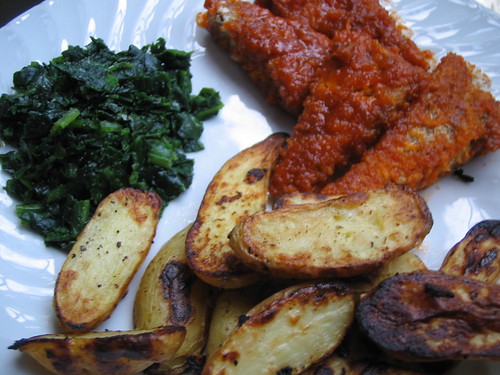