I just finished up banana pecan waffles and apple sausages Kevin made me for breakfast. Yummy! It tasted even better because I got to sit here and look at the internets while waffles magically formed and landed on a plate next to me. How cool is that?

Last night we joined up with Taylor and Beth and headed to get sushi at Sushi house Hayakawa. The owner is a former MF Sushi Bar chef. While they ate fishy bits, we had a bunch of yummy vegan rolls, edamame and seaweed salad. Our favorite was the pumpkin tempura roll, on the ends in the pic. Oh, the chef also gave us these marinated shiitake mushrooms that were amazing. Taylor and Beth ordered roasted gingko nuts so we got to try those. They’re hard to describe, but I could see myself busting open piles of them and chewing on the soft centers. I bet they can be had on Buford Highway. I’ll have to look. 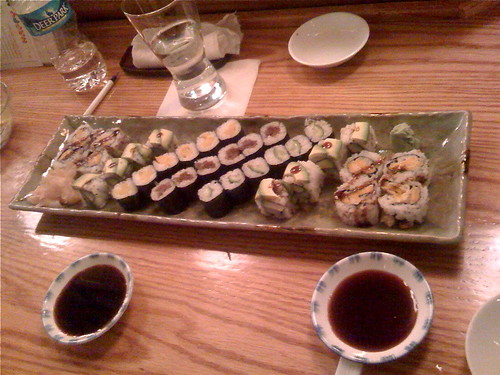 New Year’s Eve Jill & Tony came over and played Wii while I kept falling asleep. I blame the sake and the beer. Yeah, all one of each. Pfft, lightweight. Anyway, it was a nice mellow end to the year. And somehow, despite having my house broken into and watching my 401k dwindle, it was a really, really good year. And 2009 will be even better. We have plans…big plans. Mwahahahahaha!

Oh yeah, and today is this blog’s 8th birthday. Awww!